Baghdad: The Islamic State group has claimed responsibility for the bombing of a minibus that killed 12 people near the entrance to a major Iraqi pilgrimage centre.

The attack was one of the most lethal since the fall of the group's de facto capital at the end of 2017, according to the Iraqi Security Forces.

It was also one of the few Islamic State attacks south of Baghdad since the group's self-declared caliphate collapsed. 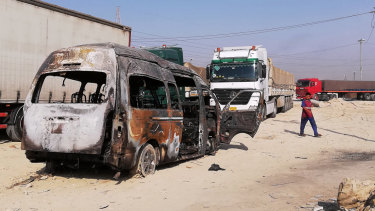 The destroyed minibus near an Iraqi army checkpoint south of Karbala, Iraq.Credit:AP

It brought back memories of the period after the fall of Saddam Hussein in 2003, when Shiite pilgrims were routinely targeted south of the capital as they travelled to shrines in the cities of Karbala and Najaf.

The bomb, left on the minibus by a passenger, exploded at a checkpoint at one entrance to Karbala near midnight on Friday local time. It killed 12 people, wounded five and demolished the bus.

Security forces said they had arrested three young men who were responsible. The three had lived in Jurf al-Sakhar, an area heavily used by the Islamic State during the period when it took over much of Iraq.

When the group lost that territory, Sunnis were expelled, and most have not been allowed to return. Many have had a marginal existence since then, living in areas for displaced people. The three suspects were construction workers, officials said.

It is now a holy period for Shiites between the holidays of Ashura and Arbaeen, which celebrate the family of Islam's founder and the fight to assert its vision of the faith.

During this period, millions of pilgrims visit the shrines at Karbala and Najaf.

During the worst years of the country's civil war, the insurgent group then known as al-Qaeda in Iraq routinely killed scores of pilgrims. Like its successor, the Islamic State, al-Qaida in Iraq adhered to Sunni Islam while its targets were generally Shiite Muslims.

The attack on Friday was a worrisome sign of the Islamic State's continuing threat.