Pennsylvania: US President Donald Trump has used a speech commemorating the victims of September 11 to highlight two of his military achievements: the deaths of Islamic State leader Abu Bakar al-Baghdadi and Iranian commander Qasem Soleimani.

The election campaign took a more sombre tone on Friday (US time), as Trump and Democratic nominee Joe Biden criss-crossed the country to pay tribute to the victims of the terrorist attacks that shook the world 19 years ago. 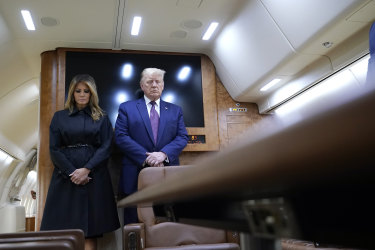 President Donald Trump and first lady Melania Trump pause for a moment of silence on Air Force One on his way to speak at the Flight 93 National Memorial in Shanksville Pennsylvania.Credit:AP

Both men travelled separately to Shanksville, a tiny town in the battleground state of Pennsylvania, which came to international attention after United Airlines Flight 93 was hijacked by four al-Qaeda terrorists and later crashed into a field, killing everyone on board.

Speaking at the Flight 93 memorial on Friday morning, Trump praised the passengers and crew who died that day after taking it upon themselves to fight the hijackers in a bid to reclaim the plane.

"Our sacred task, our righteous duty and our solemn pledge is to carry forward the noble legacy of the brave souls who gave their lives for us 19 years ago," Trump said.

He also listed some of his own administration’s military achievements, telling the families of the victims: "Less than one year ago, American warriors took out the savage killer and leader of ISIS, al-Baghdadi".

"Soon after, our warriors ended the brutal reign of the Iranian butcher, who murdered thousands of American service members. The world’s top terrorist, Qasem Soleimani, is dead." 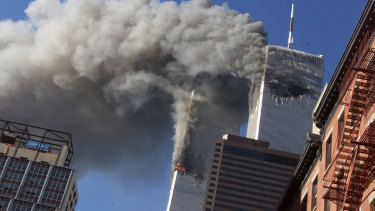 Today in the US marks the 19th anniversary of the September 1 terrorist attacks.Credit:AP

The comment was the only hint of Trump's trademark upmanship, in what was otherwise an unpartisan speech that paid tribute to the 3000 men and women whose lives were lost in the 2001 attack at the World Trade Centre, the Pentagon, and Flight 93.

Democratic nominee Joe Biden and his wife Jill flew to Shanksville a few hours after the President to lay a wreath and speak to victims' families, having spent the morning at the annual commemoration at Ground Zero in New York.

In a sign that campaign hostilities had been temporarily suspended, Biden arrived at the event and shared an elbow bump with Vice President Mike Pence and his wife, Karen. All three were wearing masks, in another reminder of the global pandemic that continues to ravage America. 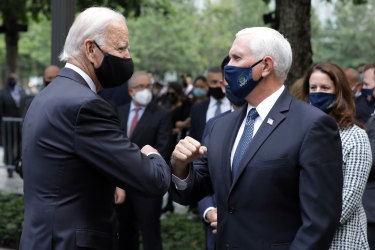 Joe Biden and Mike Pence bump elbows at the 9/11 memorial in New York.Credit:AP

Before heading to Shanksville, Biden also told reporters: "I’m not going to make any news today. I’m not going to talk about anything other than 9/11. We took all our advertising down. It’s a solemn day. That’s how we’re going to keep it, OK? You can determine whether I make news, but I’m not going to be holding any press conferences."

Trump, meanwhile, did make news – in the form of another important breakthrough in the Middle East.

The president announced on Twitter that Bahrain would establish full diplomatic relations with Israel, following in the footsteps of the Israel-UAE deal last month.

Trump said that under the agreement, Bahrain will fully normalise diplomatic relations with Israel; they will exchange embassies and ambassadors; begin direct flights between two countries; and allow for fresh initiatives in areas such as health, business, technology and education.

"This is a truly historic day," the president declared after returning to the White House this afternoon.

"This is now the second peace agreement that we've announced in the last month, and I am very hopeful that there will be more to follow. I can tell you there is tremendous enthusiasm on behalf of other countries to also join."

LVMH Files Countersuit against Tiffany to Drop $16B…
Crypto

Bitcoin Is Perfect Fit for Green Infrastructure of…
We and our partners use cookies on this site to improve our service, perform analytics, personalize advertising, measure advertising performance, and remember website preferences.Ok