Not only does Canada have a monument for Nazi troops — but after it was defaced in June, police announced they would investigate the graffiti as a “hate crime.”

A memorial commemorating soldiers in the 14th SS Division in an Ontario cemetery was “defaced” with the words “Nazi war monument” in June.

The memorial is located in the St. Volodymyr Ukrainian Cemetery in Oakville, Ontario.

The division, made up of Ukrainians who pledged allegiance to Hitler, was part of the Nazi’s Waffen SS organization which was accused of killing Polish women and children as well as Jews during the World War II.

“I am frankly dumbfounded! What could @HaltonPolice be thinking? @antihateca would be pleased to provide our wkshp on Hate & Extremism to police. This requires a retraction by police!” Bernie Farber, who chairs the Canadian AntiHate Network, tweeted this week.

Steve Elms, a spokesman for the Halton-Regional Police, cited a section of the Criminal Code that noted those communicating statements in any public place inciting hatred against any identifiable group could face imprisonment not exceeding two years and wrote in an email to the Ottawa Citizen: “This incident occurred to a monument and the graffiti appeared to target an identifiable group.”

Shockingly, the Oakville monument is not the only one honoring Ukrainians who fought with the Nazis in Canada.

A statue in Edmonton — partially funded by taxpayers – is of Roman Shukhevych, a Nazi collaborator, and there is another statue the is honoring the 14th SS Division in an Edmonton cemetery,” according to the Guardian. 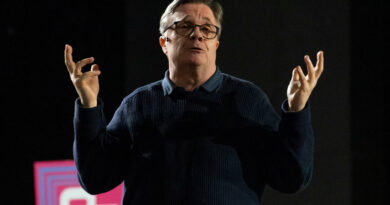 For 36 minutes on Saturday, Broadway was open.