Home » World News » ‘Downfall time’: Why Trump’s case of COVID-19 may prove fatal to his campaign

Washington: German speakers have a word that perfectly sums up Donald Trump's past 10 days: verschlimmbesserung. An attempted improvement that ends up making a bad situation even worse.

The US President went into his presidential debate against Joe Biden last week trailing substantially in the polls and in need of a breakthrough moment to turn things around. Instead, Trump's response to his COVID-19 diagnosis – and every other choice this week – has only made his re-election effort more difficult, increasing the possibility that Joe Biden will achieve a blowout victory on 3 November. 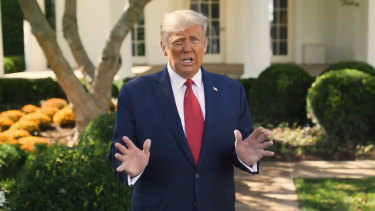 President Donald Trump says he aims to make the experimental treatments that ‘cured’ him free for all Americans.

"Over the past week the most unlikeable aspects of the Trump chaos have come to the foreground in hit after hit after hit," Matthew Glassman, a senior fellow at Georgetown University in Washington D.C, tells The Sydney Morning Herald and The Age. "His campaign may never recover from that. If there is a blowout, people will rightly or wrongly look at the past week as the moment when the wheels came off for Trump and everything spun out of control."

On the day of the first presidential debate in Cleveland, Ohio, Biden was leading Trump by 6.1 percentage points in the RealClearPolitics polling average. Then Trump delivered his bullying performance in which he constantly interrupted Biden and the moderator.

Two days later he revealed that he had tested positive for COVID-19, a development that could have won Trump some sympathy from voters. But instead of using it as an opportunity to show he understood the seriousness of the virus, he doubled down on his initial decision to downplay it. He went for an SUV joyride to wave to supporters outside the hospital, pulled off his mask to pose for photos on the White House balcony and urged Americans not to let the virus dominate their lives.

His own COVID infection has served as a metaphor – and a reminder – of his admistration's failure to get the virus under control at a national level.

On Wednesday (AEST) Trump declared that he was calling off negotiations between Republicans and Democrats over a stimulus bill to help taxpayers and companies struggling through the pandemic. On Thursday (AEST) he said he believed his infection had been a "blessing from God". A day later he announced he would withdraw from the second presidential debate, scheduled for October 15, because of the debate commission's decision to hold it virtually rather than in-person.

Many of these actions seemed to defy any rational political explanation, leading some observers to speculate that Trump's decision-making may have been impaired by dexamethasone, the steroid he has taken for his COVID symptoms.

Speaker of the House Nancy Pelosi has gone as far as to announce legislation that would create a commission to allow Congress to intervene under the 25th Amendment to the Constitution and remove the president from executive duties – if Trump were proved unfit. Congress is not in session, so votes on this in the House or Senate are unlikely, but Pelosi is keen to get people talking about the President's ability to govern.

Others point out that he has acted self-destructively in the past – such as when he proclaimed he was happy to take responsibility for the US government shutdown in late 2018.

"It's been a week-plus of total abject insanity," Steve Schmidt, a veteran Republican strategist now with the anti-Trump Lincoln Project, said on MSNBC this week. "This whole rotten fetid thing is collapsing. It's Downfall time."

If there is a blowout, people will rightly or wrongly look at the past week as the moment when the wheels came off for Trump.

Even Democrats traumatised by their shock defeat in 2016 are starting to believe the Trump era is coming to an end.

"Donald Trump is about to lose," Philippe Reines, a former senior adviser to Hillary Clinton, declared. "As much as we have all lost a little faith in our fellow citizens, I honestly think this is as simple as: the guy has just been a debacle."

Biden's lead in the RealClearPolitics average has now surged to 9.7 points, his biggest lead since late June. That puts him 4.4 points ahead of where Clinton was at the same stage of the 2016 campaign and 6.5 points ahead of where she was on election day. A Fox News poll this week showed Trump 10 points behind Biden, Ipsos showed him 12 points down, NBC News showed him trailing by 14 points and a CNN poll put him a staggering 16 points down.

Rasmussen Reports, a Republican-friendly polling firm that Trump often cites in his tweets, showed Biden leading Trump by 52 per cent to 40 per cent. If replicated on election day, that would produce a loss on par with some of the biggest defeats in US history – Lyndon Johnson's landslide victory over Barry Goldwater in 1964 and Ronald Reagan's demolition of Jimmy Carter in 1980.

US elections, of course, are decided not by the popular vote but by the results in the electoral college. But there's no good news for Trump in the battleground states that will decide the election. Biden is ahead by an average of seven points in Pennsylvania, six points in Michigan and six points in Wisconsin. If he carries those three states, and holds on to the states Hillary Clinton won in 2016, he will the election.

Biden is also leading by five points in Florida, three points in Arizona and the candidates are neck-and-neck in North Carolina, Ohio, Georgia and Texas.

"Donald Trump is getting absolutely, completely crushed in the polls right now," polling expert Nate Silver wrote on Twitter this week. "They point toward the biggest landslide since 1984."

Glassman says: "Donald Trump is a lot more likely to lose than he was in 2016 and it’s not particularly close right now. Things are all going in the wrong direction, and it’s not clear what’s on the horizon that can help him."

A caveat to this, Glassman says, is whether a systemic polling error could be dramatically underestimating Trump's level of support. If so, the error would have to be occurring across the country, across multiple polling firms and at a magnitude far greater than in 2016. Assuming a polling error on par with 2016 – when surveys overestimated Clinton's support in several key states –Biden would still win handily as the race stands today.

It's highly possible that Biden's lead will come off the boil in coming weeks if Trump's behaviour becomes less erratic and other issues, such as the Supreme Court, gain salience. But even a sizeable polling bounce for Trump would still put him behind where he needs to be.

A big difference from 2016 is that polls show just five per cent or so of voters remain undecided – way down on where that figure was four years ago.

Liam Donovan, a Republican lobbyist, says there is "genuine fear" among conservatives about the state of the race just 25 days out from election day.

"We're running out of known events that can shift things," he says. "There is a tinge of desperation in every video Trump has put out and the phone interviews he has given."

Donovan says Trump's decision not to participate in the second debate was a "power move that backfired" given he, rather than Biden, needs a game-changing development. The final debate, scheduled for October 22, is due to be held just a week-and-a-half before election day.

As well as time, the Trump campaign appears to be running out of money – a stunning development given it began the year with a huge cash advantage over Biden.

An analysis by Politico this week found that Biden is out-advertising Trump in 72 out of 83 media markets where the campaigns are spending money, including in key states like Pennsylvania and Wisconsin.

Biden had the airwaves to himself in Iowa, Ohio, Texas and New Hampshire after the Trump campaign pulled down its advertising in those states, the TV tracking firm Advertising Analytics found. "It's an ominous sign," Donovan says – both for the President and Republican senators in tough re-election fights.

Trump has insisted that, after returning from hospital, he feels in better health than he did 20 years ago. His political survival, however, looks much less assured.

Our weekly newsletter will deliver expert analysis of the race to the White House from our US correspondent Matthew Knott. Sign up for the Herald‘s newsletter here, The Age‘s here, Brisbane Times‘ here and WAtoday‘s here.

WordPress content can now be timestamped on Ethereum
We and our partners use cookies on this site to improve our service, perform analytics, personalize advertising, measure advertising performance, and remember website preferences.Ok