During a meeting in Washington this week, Indian officials warned the IMF against helping Pakistan, pointing out how the country was already “grey listed” under the Financial Action Task Force (FATF) – a governmental body in charge of combating money laundering and terrorism financing. Pakistan also faced a high probability of being put on the “black list”, officials added, which will restrict Islamabad from accepting financial support from other countries. Tensions between India and Pakistan have escalated since February’s bomb attack in the disputed Kashmir region, which killed 44 paramilitary policemen was later claimed by JeM. The two countries have engaged in an ongoing conflict over the heavily disputed territory.

India has faced a rise in attacks from neighbouring Pakistan in recent months, which is said to be harbouring a range of terrorists including Pakistan-based Islamist militant group Jaish-e-Mohammad (JeM) chief Masood Azhar.

However, Pakistani finance minister Asad Umar, who resigned on Thursday, said the country had already reached an “agreement in principle” with the IMF.

Mr Umar stood down from his position following widespread criticism from business leaders and politicians over his handling of a bailout deal with the IMF.

Pakistan was forced to turn to the IMF for a bailout package, as the country’s economy continues to dwindle at a rapid rate.

Islamabad is seeking a £6billio-£9billion payout from the IMF as the country continues to face over £13.8billion of debt.

Pakistan’s inflation is at a five-year high of more than nine per cent, while the rupee’s value has dropped by 33 percent since 2017.

If the IMF bails Islamabad out, it will be the country’s 13th loan from the organisation.

Last year, Pakistan turned to countries including Saudi Arabia and China for at least £5.5billion in short-term loans instead of securing an IMF bailout package.

At the time of his departure, Mr Umar said: “It was the worst economy that we inherited. We’ve seen improvement, but we are nowhere near an ideal situation.” 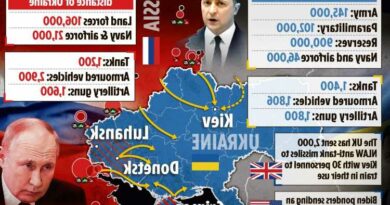 World warns Vladmir Putin to step back from brink of 'violent' Ukraine invasion as US set to rush in 50,000 troops