Beirut: Lebanon's ambassador to Germany Mustapha Adib is poised to be designated prime minister after winning the support of major parties to form a new government in the aftermath of the Beirut port explosion.

The nomination followed contacts by French President Emmanuel Macron over the last 48 hours to press Lebanese leaders to agree on a candidate, two senior Lebanese officials said, just ahead of a visit by the French leader to Lebanon this week. 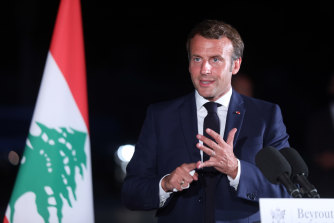 French President Emmanuel Macron is pushing ahead with demands for Lebanon rulers’ to reform. Credit:Bloomberg

Macron has taken centre stage in international efforts to get Lebanon's fractious leaders to start addressing a financial crisis that had devastated the economy even before the August 4 port blast that killed some 190 people.

A French presidency source said Macron had been in contact by phone with the main protagonists on Saturday and Sunday. "The President is informed of the negotiations underway in Beirut," the source said.

Last week Lebanon's various sectarian leaders were deadlocked over the choice of a new prime minister. One of the two senior Lebanese sources said Macron's role had been essential in clinching the agreement on Adib.

The previous government led by Hassan Diab quit on August 10 over the port blast in which a massive amount of unsafely stored chemicals detonated.

Adib has a doctorate in law and political science and previously served as an adviser to Najib Mikati, a former prime minister. He has served as ambassador to Germany since 2013.

The post of prime minister must go to a Sunni Muslim in Lebanon's sectarian system. Adib's candidacy won vital political backing on Sunday from former prime ministers including Saad al-Hariri, who heads the biggest Sunni party, the Future Movement.

President Michel Aoun, a Maronite Christian, is due to meet parliamentary blocs on Monday in the official consultations to designate the new prime minister. He is required to nominate the candidate with biggest level of support among MPs.

The Christian Free Patriotic Movement (FPM), a political ally of Hezbollah which was founded by Aoun and is led today by his son-in-law Gebran Bassil, will do the same, Bassil told Reuters.

Once designated, the process of forming a new government will get underway. Until a new administration is agreed, the Diab government continues in a caretaker capacity.

Lebanon's financial crisis has sunk the currency by as much as 80 per cent since October, locked savers out their deposits in a paralysed banking system and fuelled poverty and unemployment.

Lebanon launched talks with the International Monetary Fund in May, after defaulting on its huge debt, aiming to secure financial support but these have stalled amid divisions on the Lebanese side over the scale of losses in the financial system.

Get our Morning & Evening Edition newsletters

The most important news, analysis and insights delivered to your inbox at the start and end of each day. Sign up to The Sydney Morning Herald’s newsletter here,  The Age’s newsletter here, Brisbane Times‘ here and WAtoday‘s here.

Girl, 15, killed by train while ‘listening to music and reading texts’