Malaysia’s opposition leader Anwar Ibrahim met the Southeast Asian nation’s king on Tuesday morning in an attempt to prove he has the parliamentary support needed to replace Prime Minister Muhyiddin Yassin who took power in March.

Anwar added a fresh twist to the country’s political drama last month after he declared that he had secured a “strong majority” from federal politicians to form a new government.

The renewed struggle for power comes as Malaysia faces a new wave of coronavirus cases that have prompted the authorities to impose a two-week lockdown in Kuala Lumpur and the neighbouring state of Selangor, the country’s richest state, with effect from midnight (16:00 GMT) on Tuesday.

Should Anwar succeed in securing the post, it would be the culmination of a decades-long quest, during which he spent nearly 10 years in jail. He would also become Malaysia’s third prime minister this year.

Muhyiddin emerged as leader in March after a week of political turmoil when several disgruntled members of the then-ruling Pakatan Harapan coalition joined forces with parties that had lost power in 2018.

The move led to the resignation of 95-year-old Mahathir Mohamad as prime minister and scuppered a promise that Anwar would become prime minister two years after the Harapan victory.

No main party has offered a clear declaration of support for Anwar although one party, which is a member of the ruling coalition, has said some of its MPs support him.

“Should the meeting fail to translate into an actionable outcome, his credibility will be affected and this may push the opposition bloc to find another PM candidate,” Shazwan Mustafa Kamal, senior associate at political consultancy Vriens & Part the Reuters news agency.

King Sultan Abdullah Sultan Ahmad Shah plays a largely ceremonial role but he can appoint a prime minister who in his view is likely to command a majority in parliament. He also has the power to dissolve parliament and trigger elections on the premier’s advice.

It was not clear whether the outcome of the meeting would be known on Tuesday.

Local media reported Anwar’s car arrived at the palace at about 10.25am (02:25 GMT). He left after about an hour, smiling and waving to supporters and the media who had gathered at the palace gates. He is expected to hold a press conference at 2pm (06:00 GMT).

On Monday, police said they had opened an investigation into Anwar’s claim of a majority, after a list of his alleged backers spread on social media.

Muhyiddin, who was previously part of the Pakatan Harapan coalition, is under pressure over his administration’s handling of COVID-19. The country had largely brought the virus to heel, but an attempt to topple the Pakatan-friendly government in the state of Sabah coincided with an outbreak of the virus in the Borneo state, Malaysia’s poorest.

If you are not angry at the recent declaration to impose #CMCO in the Klang Valley, you are either privileged (T20, etc) or not paying attention. #PKPB

The harm that this will cause beyond the disease itself. I really don’t know what to say.

The MCO was supposed to buy us time to prepare the health care system for future outbreaks, NOT to eradicate the virus. What did we do for the past 6 months since MCO in March? Are you saying we didn’t prepare enough?

After an election was called to resolve the issue, politicians and campaign staff travelled back and forth between Borneo and the peninsula and sometimes did not follow the protocols on mask wearing and social distancing.

Officials said those returning to Kuala Lumpur from Sabah would also not be required to go into quarantine if they tested negative when arriving at the airport, despite strict centralised quarantines for all arrivals from overseas.

The virus has now spread across Sabah and seeded outbreaks in every state in the country.

Politicians, including Malaysia’s religious affairs minister and Sabah’s new chief minister, have been among those diagnosed with COVID-19. The entire cabinet is currently in the midst of a 14-day isolation period. 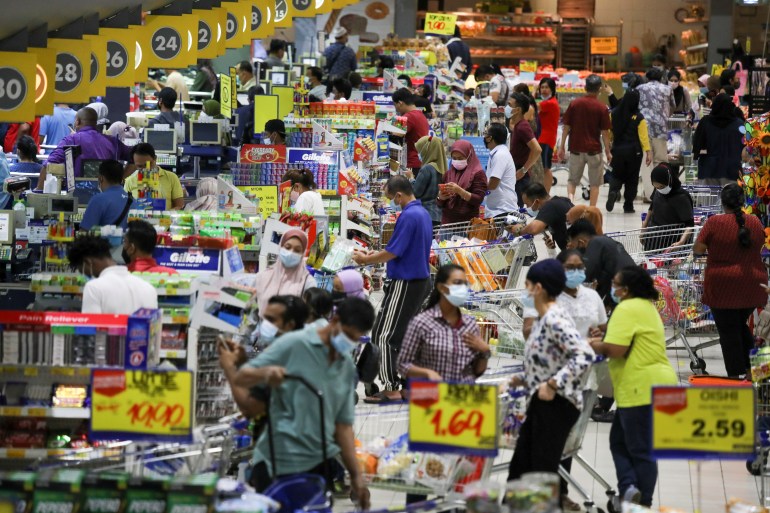 News of the movement restrictions, known as a CMCO in Malaysia, prompted big queues at some supermarkets in the capital and its neighbouring suburbs [Lim Huey Teng/Reuters]There were 563 new cases reported on Monday, bringing the total since the start of the pandemic to 16,220.

The decision to impose a lockdown in Kuala Lumpur was greeted with anger by many residents who questioned the need for such a broad-based response.

Noor Hisham Abdullah, the director-general of the health ministry, said the move reflected not only the actual number of cases in an area but the pattern of transmission.

“If the transmission of the infection has spread to every district throughout the state and records new cases every day, it means transmission can no longer be effectively curbed,” he wrote in a series of tweets on Tuesday morning.

BTC hash rate slumps amid seasonal miner migration in China
We and our partners use cookies on this site to improve our service, perform analytics, personalize advertising, measure advertising performance, and remember website preferences.Ok