Thousands of demonstrators clash with police after defying lockdown to mark religious festival. 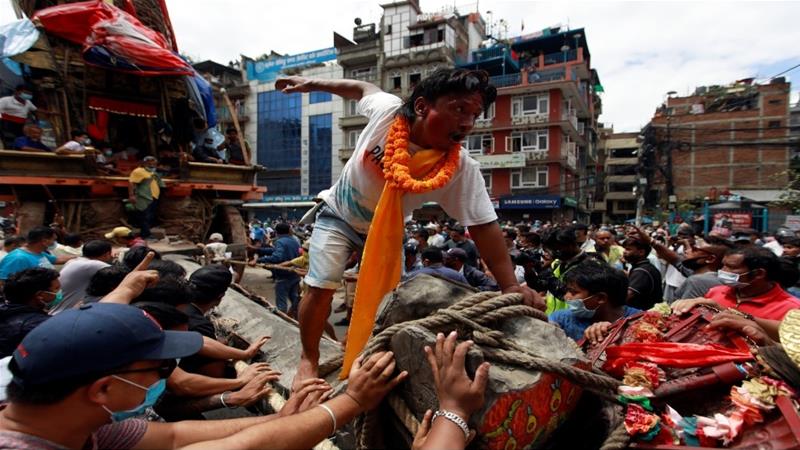 Police in Nepal used tear gas and water cannon to break up a religious rally that defied a government ban on public gatherings imposed to stop the flow of the coronavirus.

Despite the ban, some 2,000 residents poured into a major thoroughfare of Lalitpur, near Nepal’s capital Kathmandu, on Thursday to pull a chariot of the rain God, Rato Machhindranath, a ritual that has been celebrated for generations.

Temporary curbs were imposed in Kathmandu and surrounding areas in August to help contain coronavirus contagion and residents were asked to observe festivals at home.

Witnesses said the demonstrators, wearing protective face masks against the virus, threw rocks at baton-wielding police and set a police motorcycle on fire.

An injured person was carried away by police, they said.

Despite the ban, participants said they must be allowed to carry on with the tradition of rain God worship, which has been practised for centuries.

Some participants carried placards reading: “We oppose efforts by the administration to interfere in our culture and festivals.”

Rato Machindranath – a deity whose statue is made from clay and covered in red paint with eyes wide open – is pulled around the city for a month in the belief that it will please gods so they can provide for a generous rainfall, a good harvest and prosperity.

On Thursday, Nepali Health Ministry spokesman Jageshwor Gautam said the number of coronavirus infections in the Himalayan nation had increased to 42,877, with 257 deaths.

Temple-studded Kathmandu Valley recorded 445 new cases, a jump of about 7 percent from the previous day.

Death toll rises to 13 as Turkey hit by 2nd avalanche