North Korea's first vice foreign minister, Choe Son Hui, said that if Trump deliberately stoked "the atmosphere of confrontation" once again, then that "must really be diagnosed as the relapse of the dotage of a dotard".

Choe issued her statement, which was carried by the official Korean Central News Agency, in response to remarks Trump made in London on Tuesday, on the sidelines of his meetings with NATO leaders. 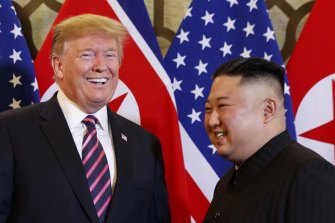 Old insults have been revived between the US President and North Korean leader.Credit:AP

"We're by far the most powerful country in the world," Trump said, urging North Korea's leader, Kim Jong Un, to honour his promise to denuclearise. "And, hopefully, we don't have to use it, but if we do, we'll use it."

Although he said he still had "a good relationship" and "confidence" in Kim, Trump also ​employed the mocking nickname he had used against the North Korean leader when he and K​im traded threats of war and personal insults two years ago.

"He definitely likes sending rockets up, doesn't he?" Trump said, referring to the ​recent ​series of short-range ballistic and rocket tests​ by North Korea​. "That's why I call him 'Rocket Man.'"

On Wednesday, the North Korean military vowed to retaliate if the United States used military force. But Thursday, Choe said her government was more upset by Trump's name-calling against its leader than his threat to use military force.

She warned that ​North Korea could resume a war of insults against Trump.

"If Trump's remarks on use of force and metaphor were a mistake, it would be a relief, but if they were a calculated provocation intended against us, that makes things different," Choe said.

In his UN speech in September 2017, Trump threatened to "totally destroy" North Korea and famously called Kim a "Rocket Man" on "a suicide mission​."

Trump issued his 2017 threat after North Korea flight-tested two intercontinental ballistic missiles and detonat​ed what it called a hydrogen bomb in its sixth and most powerful underground nuclear test. 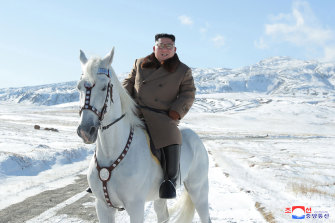 "A frightened dog barks louder," Kim said, referring to Trump. "I will surely and definitely tame the mentally deranged U.S. dotard with fire."

In a dramatic shift, ​however, ​ Kim and Trump started engaging in diplomacy in 2018, with Trump going so far as to say that he and Kim "fell in love."

In June 2018, they held their first summit meeting in Singapore, during which Kim promised to "work toward complete denuclearisation of the Korean Peninsula" in return for "new" relations and security guarantees from Washington.

But subsequent negotiations have stalled over how to implement the broadly worded agreement, and North Korea has sounded increasingly frustrated about negotiating with Washington in recent months.

It has resumed short-range missile tests this year, warning that it would formally end diplomacy unless the United States made more concessions by the end of December.

Climate change: Sight of Victoria Falls cut to a trickle is heartbreaking