Paris is to be placed on maximum COVID-19 alert, meaning bars will be forced to close for two weeks from Tuesday and restaurants will have to put in place new sanitary protocols to stay open, the prime minister’s office said.

Prime Minister Jean Castex’s office said there had been no improvement in the Paris region since the capital passed all three of the government’s criteria for being put on the highest level of alert mid last week.

Working from home should be prioritised “now more than ever” in the Paris area and university lecture halls should be no more than half full, Castex’s office said in a statement.

The reinforced restrictions will take effect from Tuesday.

“These measures, indispensable in the fight to curb the virus’ spread, will apply to Paris and the three departments immediately surrounding it, for a duration of two weeks,” it said.

For a city to be placed on maximum alert, the incidence rate must exceed 100 infections per 100,000 among elderly inhabitants and 250 per 100,000 among the general public, while at least 30% of intensive care beds are reserved for coronavirus patients.

Figures from the regional health agency ARS show new coronavirus cases remaining above 250 per 100,000 people in Paris, a threshold triggering the maximum alert protocol which has already hit the southern cities of Aix-en-Provence and Marseille and their surroundings, as well as the French overseas territory of Guadeloupe.

“There is no justification for denial,” Aurelien Rousseau, ARS director for the Paris region, said on Sunday. “The numbers are what they are, and they are weighing heavily,” he wrote on Twitter.

On Saturday, France reported a total of 16,972 new coronavirus cases, the highest daily number since the country began widespread testing, with overall infections now standing at 629,509. It also registered 49 more fatalities, bringing its total death toll from COVID-19 to 32,198. 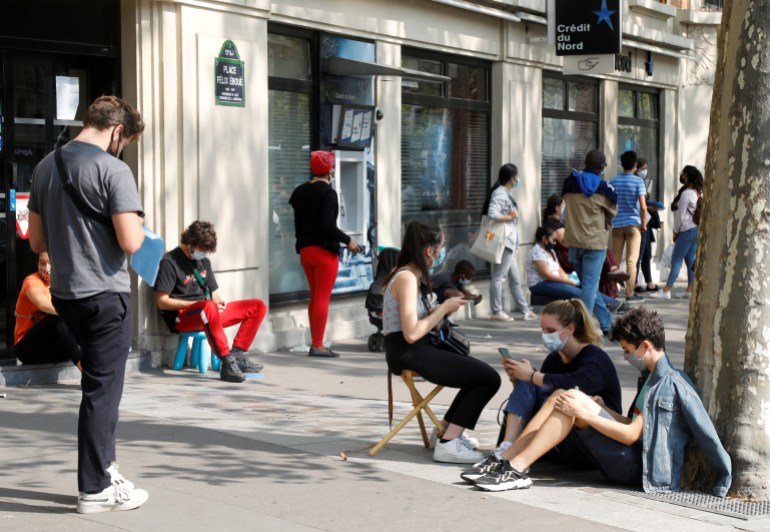 Interior Minister Gerald Darmanin acknowledged the closure of bars and cafes would be “tough” for everyone concerned.

A poll published on Sunday by BFM television showed that 61 percent of people living in Paris and its suburbs were in favour of complete closure of bars, which had been authorised to remain open until 10pm.

The health authorities are evaluating a proposal submitted by restaurants for voluntary restrictions – including registering the home addresses of their clients and limiting the number of people at each table – before submitting their recommendations to the government.

Other large French cities including Lille, Lyon, Grenoble and Toulouse are also hovering near the maximum alert threshold and could also face similar measures as in the capital.

Employer organisation UMIH, which represents cafes, hotels, restaurants, brasseries and discos, has warned that 15 percent of France’s 220,000 establishments in the sector is threatened with bankruptcy because of coronavirus restrictions, with up to 250,000 staff facing unemployment.

The government has said it will take every precaution necessary to avoid a new state of emergency that would require a generalised lockdown such as the one imposed at the height of the outbreak, from mid-March to mid-May.