Commuters would receive real-time information about crowding on public transport under a trial of new technology designed to encourage social distancing and boost confidence in Victoria's network.

A group of 50 commuters – largely essential workers currently using the system – will participate in the first phase of a Transport Department trial being rolled out across Melbourne's trains and several bus routes this week. 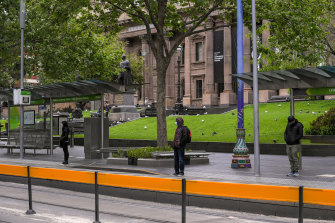 Passengers socially distance while waiting for a tram on Swanston Street on Monday. Credit:Eddie Jim

The participants will have access to real-time information about passenger density on buses, trains and train platforms. This will be derived from a predictive model that uses data from the Myki system, bus passenger counters and Bluetooth sensors across the rail network.

The trial is set to be expanded in coming months and if deemed successful, would be rolled out to all commuters on the PTV app soon after that – but possibly not until early next year.

Similar technology is being rolled out in the Netherlands, Spain and China as transport operators across the globe face dramatic drops in patronage due to infection fears and working-from-home arrangements.

Victoria's public transport use dwindled to 9 per cent of normal levels at the height of the second lockdown, with the Andrews government understood to have paid Metro $56 million as part of a COVID-19 rescue package.

Monash University's chair of public transport, Graham Currie, welcomed the trial, saying it was in line with international practice in managing public transport use during the pandemic.

"This is about building confidence in the network to make people feel reassured that they can avoid crowding," Professor Currie said.

Commuters would be more able to make an informed decision about whether they wish to use public transport if they can access the network's crowding levels, he said.

Public Transport Minister Ben Carroll said the trial would meet the needs of commuters looking to use the network as restrictions ease.

“The coronavirus pandemic has presented an opportunity for us to rethink how we travel around the state – we want these passenger modelling trials to help people travel more reliably and safely," Mr Carroll said.

The state's PTV app was revamped on Monday, enabling users to manage their Myki cards through the app rather than queuing for over-the-counter transactions or top-up machines. It would also provide instant updates about disruptions as well as bus and train locations.

The Andrews government has separately said that it will spend $26 million on life extension works for A and Z-Class trams, as part of a $328 million investment in critical transport maintenance and upgrades announced earlier this year.

The works would maintain electrical, braking and traction systems on the trams running on 17 routes across Melbourne and making up a third of the city's fleet. 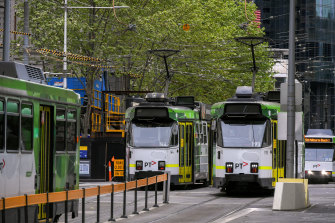 The high-floor A and Z-Class trams were built by Comeng in the 1980s and can fit 105 and 112 passengers respectively, compared with 210 on the newer E-Class trams.

The Z class trams built in the 1970s – the Class 1 and 2 vehicles – have been retired, leaving 111 Z-Class 3 trams on the network. Victoria is currently running 69 A-Class trams.

But fresh orders for more low-floor, accessible and air-conditioned trams were needed to boost the quality of service while also providing more space for commuters to socially distance, Mr Bowen said.

"The challenge with public transport over the coming months is to make sure there will be enough capacity for people to stay physically distanced as they travel," he said.