The Morrison government's push to "ring fence" suburbs with coronavirus outbreaks has been labelled dangerous by the New Zealand government, with its Health Minister describing the Melbourne's postcode lockdown a failure.

New Zealand Health Minister Chris Hipkins said postcode lockdowns had failed in Melbourne and contributed to its "protracted and prolonged stage four-style lockdown". His critical assessment comes as the Australian government pushes for the states to agree to a similar "hotspot" strategy, which "ring fences" suburbs with positive cases and possibly neighbouring postcodes. 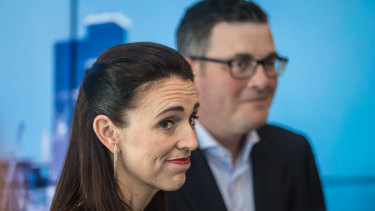 Victoria released its plan on the weekend for Melbourne exiting its stage four lockdowns based on reducing case infections to "very low numbers", raising questions whether the state was now pursuing an elimination strategy.

New Zealand's second wave outbreak began on August 11 after 102 days of no community transmission. The 173-person cluster is the largest the country has seen, though case numbers are now declining.

The outbreak prompted Ardern to put Auckland into a level three lockdown and the rest of the country at level two just one day after cases were detected, in stark contrast to the Victorian government's move to a postcode lockdown on July 1, then a stage three lockdown for Melbourne on July 8 and stage four on August 2. 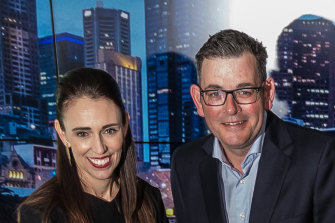 The investigation into a Melbourne link, which has since been ruled out, led to a series of phone calls between Ardern and Andrews. However, it wasn't the first time the pair had spoken – they struck up a friendship when Ardern visited Melbourne in July 2019.

The two leaders regularly compare notes on the virus, despite Victoria's stated aim of suppression rather than aiming to eliminate COVID-19. They also talk political strategy, according to people familiar with the discussions.

Ardern's political views are far closer to Andrews than Australian Prime Minister Scott Morrison. Both are relatively young (he's 48 and she is 40), progressive, active on social media and lead jurisdictions of similar sizes (Victoria is home to 6.3 million people and New Zealand about 5 million).

Both went hard and early when the pandemic first arrived. During the first meetings of the national cabinet, Andrews was one of the premiers pushing hardest for tougher restrictions while Ardern moved her country to strict level 4 restrictions on March 26.

Professor Tony Blakely, an epidemiologist who co-authored Victoria's coronavirus modelling, said he had backed the decision to lockdown 10 Melbourne postcodes from July 1 – but now concedes that move had been the wrong call.

He said the lesson New Zealand had learned from Melbourne's postcode lockdown attempt. He said "you have to make the hotspot wide" to succeed.

Blakely said it was understandable the Morrison government was pushing for a hotspot or postcode strategy to underpin the opening of state borders because "how else would you open the borders if you have the virus circulating"?

The difficulty, he said, would be in working out details as virus-free states would want tough rules in place for potential visitors from New South Wales and Victoria, "whereas Victoria may not be as concerned for example".