Screening travellers for Covid-19 at the border ‘could slow transmission’ of the virus, finds review of scientific evidence

Screening people for coronavirus at airports and train stations could ‘slightly’ slow down the spread of the disease, according to a review of scientific studies.

Whether to test people at airports or to quarantine travellers returning from certain destinations has been a sticking point for politicians around the world.

Britain is currently forcing travellers to self-isolate for two weeks if they come into the country from somewhere with a high infection rate – currently included on the list are France, Spain and Portugal – but there is no testing or screening in place.

Bosses at Heathrow have set up a facility capable of testing 13,000 people per day, but aren’t yet using it.

Now a review of the existing evidence surrounding coronavirus in travellers suggests screening them at the border – asking them whether they have had symptoms – could slow down the spread of the virus.

The review, by the Cochrane Library group of international scientists, looked at 22 past studies and found there was weak evidence in favour of screening.

It could push back a local outbreak by eight days if there were 10 infected people arriving per day, researchers found, without any other measures in place.

Systems would catch some infected people but would also miss others carrying the virus and wrongly diagnose some people, the scientists said. 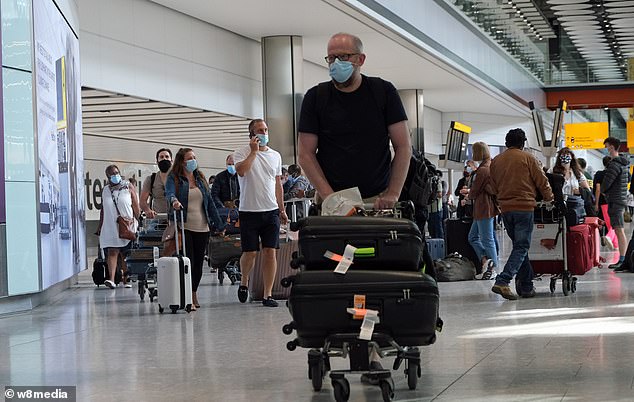 In Britain travellers are currently required to self-isolate for two weeks if coming home from places where the coronavirus infection rate is high, such as France, Spain and Portugal

Researchers wrote in the Cochrane Review: ‘One study suggests that symptom screening at travel hubs, such as airports, may slightly slow but not stop the importation of infected cases (assuming 10 or 100 infected travellers per week reduced the delay in a local outbreak to 8 days or 1 day, respectively).’

Border screening would involve asking people about their health to find out whether they have had any symptoms of Covid-19.

It could also involve taking their temperature in a bid to spot those with a fever, which is one of the most common signs of the illness.

Officials at airports all over the world have been doing this throughout the pandemic but it was never adopted in the UK.

The Cochrane experts said the evidence they found was of low quality, meaning the scientific papers it was published in were not particularly well done studies.

Britons travelling to the European Union could soon face quarantine on arrival in any nation as countries consider whether to adopt a standardised threshold for imposing self-isolation rules.

The European Commission is pushing member states to adopt its recently published ‘traffic light’ quarantine system so that the entire bloc uses the same criteria for restricting travel.

The EU’s system would see quarantine measures applied to all arrivals from countries which have more than 50 coronavirus cases per 100,000 people over the previous two weeks and a positive test rate above three per cent.

A recent surge in cases means the UK currently has an infection rate of 51.1 per 100,000 and a positive test rate of six per cent – both above the EU’s threshold. 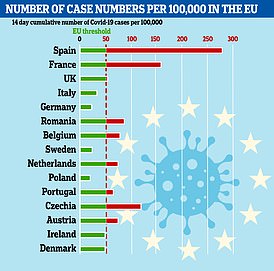 The Telegraph said France, Spain, Germany and the Netherlands are all in favour of a standardised system.

However, it is thought they would want to retain the ability to act unilaterally on quarantine so they could alter restrictions when they see fit.

The expected move by Ireland comes as Finland moves to roll out updated quarantine measures from this weekend.

Its system will see arrivals from countries with 25 cases per 100,000 having to quarantine and get tested.

Looking at 12 specific papers they found that one-off screening procedures could catch between 0 and 60 per cent of people with the virus.

And they would wrongly single out between 0 and 44 per cent of people who were actually healthy.

Measuring someone’s temperature and asking them about their travel history and social contact could be up to 23 per cent accurate at weeding out infected people, the study said.

While temperature screening and assessment of symptoms was more accurate at between 12 and 69 per cent.

Both carried a risk of about one in 10 people being wrongly thought to have Covid-19.

The researchers wrote: ‘Low‐certainty evidence suggests that screening at travel hubs may slightly slow the importation of infected cases…

‘Given the poor sensitivity of existing approaches, our findings point to the need for greater emphasis on other ways that may prevent transmission such as face coverings, physical distancing, quarantine, and adequate personal protective equipment for frontline workers.’

The aviation industry is pleading with the UK Government to change its policy on quarantine rules for people flying into Britain saying it threatens to strangle the sector.

The west London airport registered an 82 per cent fall in passenger numbers in August compared to last year, as it repeats its call for Boris Johnson to introduce testing as an alternative to Britain’s 14-day quarantine rule.

Heathrow, which before the Covid-19 pandemic was the busiest airport in Europe, said that North American passenger numbers were down 95 per cent compared to last year as the coronavirus quarantine rule deters long-haul travel.

Just 1.4million people travelled through the major London airport in August, compared with 7.7million during the same month in 2019.

A spokesman for Heathrow Airport said that Covid-19 has ‘decimated the aviation industry’, caused an ‘unprecedented drop in passenger numbers at Heathrow’, and cost the airport over £1billion since March.

It comes as the coronavirus crisis takes a sledgehammer to the travel industry in its gravest ever crisis, with airlines forced to cut thousands of jobs and slash the number of flights they provide as demand for international travel falls.

John Holland-Kaye, Heathrow’s boss, has said over 30 airports worldwide are using testing of travellers as a way of reducing quarantine requirements – with one of those, Germany’s Frankfurt, having overtaken Heathrow in passenger numbers.