What the PECK! Ravenous seagulls try to gobble up a chip tossed onto car’s dashboard by driver… but can’t get their beaks on it due to WINDSCREEN

This is the hilarious moment a flock of hungry seagulls peck at a car’s front window in an attempt to get a chip on the dashboard.

Footage taken on October 4 shows the swarm of animals descending on the car in the attempt to retrieve the chip at Owhiro beach, Wellington.

Georgina Grey, from Wellington, New Zealand, was eating fish and chips in the vehicle with her boyfriend as the birds watched from outside. 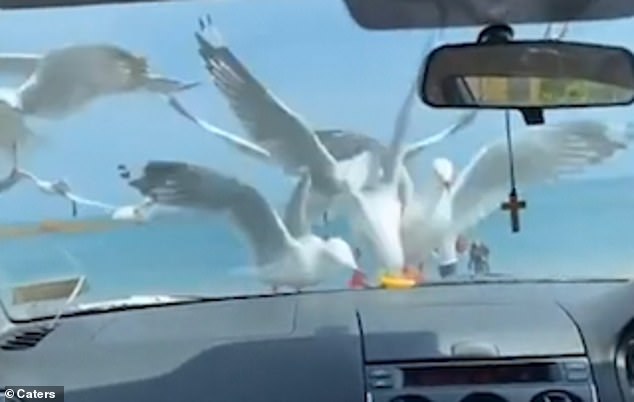 Two seagulls were standing on the bonnet of a car, and to trick the greedy animals, she threw a chip against the front windscreen.

Their beaks hit off the glass as they peck at the chip, not realising they are unable to get it as it sits on top of the dashboard.

Suddenly a flock of seagulls join the other birds in a frenzy to try and get a taste of the food.

The video went viral online with over 600,000 views, as users commented on the hilarious clip.

One user commented: ‘Fun and games till they crack ur window’.

Another referenced the Adele song Hello playing on the car radio and joked: ‘Hello from the other side’.

It’s not the first-time seagulls have made headlines for their love of chips.

In August, a startled mother was attacked by a flock of the seaside menaces at Brighton beach who stole all her fries in seconds.