Washington: US President Donald Trump has launched a fresh attack on the mental acuity of his political rival Joe Biden, claiming without evidence the Democratic nominee uses drugs to improve his debate performances.

In excerpts from a Fox News interview set to be aired in the US this weekend, Trump again claims that Biden “possibly” requires pharmaceutical assistance to get through debates, and that he hears the candidate may have used them to improve his performance during the Democratic primaries. 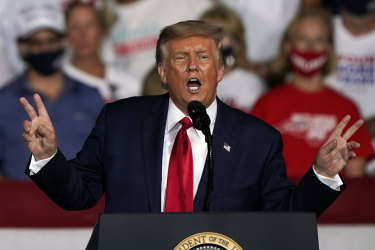 Donald Trump is stepping up his attacks against Joe Biden’s mental acuity.Credit:AP

"I mean, there's possibly drugs. I don't know how you can go from being so bad where you can't even get out a sentence.”

The comments come as both candidates prepare to go head-to-head in the first of the presidential debates on September 29 and as Trump supporters continue to circulate unproven claims about Biden's health on social media.

Last week, the Department of Homeland Security was forced to defend its decision to withhold an intelligence report warning that Russia was trying to portray Biden as mentally unstable.

It is not the only time that Trump has claimed that Biden uses enhancement drugs, nor is it the only time he has questioned the mental capacity and stamina of the former vice-president. 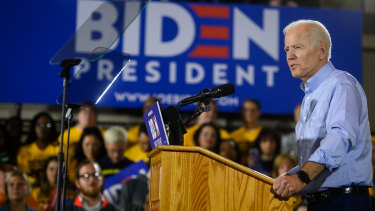 Joe Biden has previously laughed off Trump’s attacks about his mental fitness.Credit:Bloomberg

In July, in a one-on-one interview with respected journalist Chris Wallace, Trump challenged Wallace to "let Biden sit through an interview like this – he’ll be on the ground crying for mommy.”

Biden has previously laughed off Trump’s attacks but the issue is nonetheless sensitive for the Democrats as the election race tightens.

After a 47-year career in politics, some supporters are concerned that Biden, now 77, does not appear as sharp as he once was and has not matched the gruelling travel schedule of Trump, who is three years younger.

Until last week, most of his campaign had been "virtual" and mainly from his home in Delaware due to coronavirus concerns, or at stage-managed events where staffers have restricted journalists from asking questions.

Doubts also reignited last week when Biden attended a virtual Q&A session with union workers in the key battleground state of Pennsylvania, and appeared to be reading his answers off a teleprompter. Campaign strategists later sought to avoid answering questions about the matter.

Biden has acknowledged he has been affected by a stutter since childhood.

Audiences will soon be able to judge how Trump and Biden verbally spar against each another, when Wallace hosts the first of the debates later this month, in which coronavirus – along with the economy and race relations – will be front and centre. 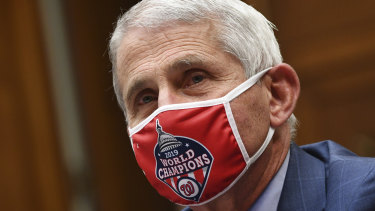 Dr Anthony Fauci, director of the National Institute for Allergy and Infectious DiseasesCredit:AP

Trump has said in recent days that a COVID-19 vaccine could be developed by the end of the year, and possibly even before the November 3 election.

On Saturday (AEST), however, the nation’s top infectious diseases expert, Dr Anthony Fauci, warned that even if a vaccine was developed soon it would not be available immediately, and might only be about 75 per cent effective, unlike the measles vaccine, which is up to 98 per cent effective.

As the US heads into autumn and winter over the next few months, Fauci also highlighted Australia's efforts as he urged people to get a flu shot while hunkering down and social distancing in the colder months. This, he said, might help people avoid both coronavirus and the seasonal flu.

“We have some suggestions that this might be the case, because Australia, which has their winter from April to September had their smallest and less impactful flu season in memory,” he told CNN.

“They had almost a non existent flu season, likely because they were wearing masks, they were keeping physical distance, and they were avoiding crowds. So let's hope that if we do that, we'll avoid the double whammy of having influenza overlapping with COVID-19.”

The global pandemic and its impact on jobs will remain a critical issue for voters in the final stretch of the campaign. According to the latest figures from Johns Hopkins University, COVID-19 has infected 6.43 million Americans and killed more than 190,000.

About 100 Uniqlo stores re-open in virus-hit China this week, 250 shut