Two pet turtles have died and completely dried up after their student owner left them in his dorm in China for nearly five months due to a coronavirus lockdown.

The second-year undergraduate, known by his surname Liu, told local media that he thought the lockdown would only last for a short while and the reptiles would survive.

Footage shows the two dead turtles’ bone-dry bodies discovered by Liu when he was recently allowed to return to the campus. 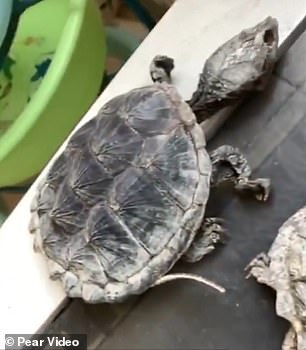 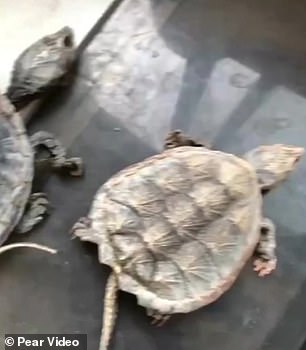 A shocked Chinese student has found his two pet turtles have died and completely dried up after he left the animals in his dorm when the university shuts nearly five months ago due to the coronavirus outbreak. The pictures above show screenshots of the footage filmed by Liu

The devastated pet owner said that he wanted to preserve the animals’ corpses as specimens.

‘I was so shocked when I saw the turtles. I was so upset,’ the university student told Pear Video.

‘I didn’t think the outbreak would last thing long, so I didn’t bring them home because they would be fine without being fed.’

The pet owner said that he had kept the turtles for years and treated them with care.

Another video clip filmed by Liu before the campus closure shows his beloved pets resting in a water tank with fish swimming around.

‘I always fed them with live fish,’ he added.

The story was revealed by Pear Video on Monday. But it remains unclear where the incident took place.

While some Chinese web users found the video amusing, others were horrified by the incident and called for a ban on students keeping pets in their university residence.

One commenter wrote: ‘This is not funny, it is devastating. We should stop students from having pets in dorms.’

Another said: ‘If you can’t afford to keep them, don’t. The turtles literally died of thirst and hunger. What’s funny about that? Speechless.’ 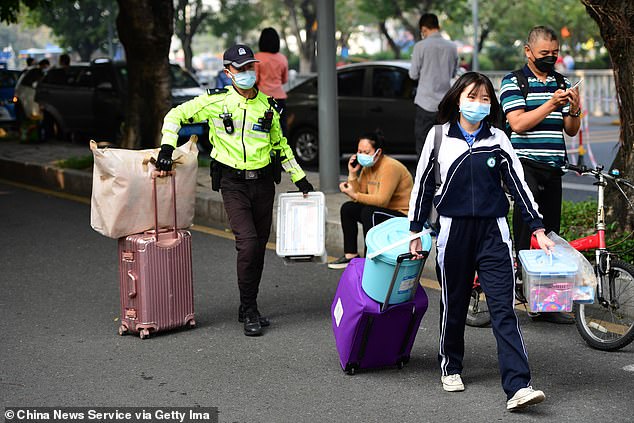 Although Chinese schools and universities forbidden pupils from having animals in residence halls, many students still attempt to keep them discreetly. Pictured, a student takes her luggage as she moves in the student residence at Shenzhen Futian High School on April 27 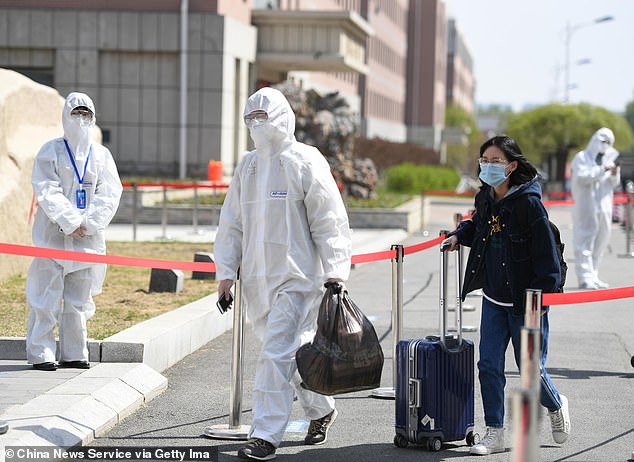 Tens of millions of Chinese students have been returning to their campus recently after China appears to have largely contained the coronavirus outbreak, A student wearing face mask is pictured on May 7 arriving at changchun University of Chinese Medicine after it reopens

Tens of millions of students across China have been returning to their campus recently after the country where the pandemic began appears to have largely contained the coronavirus outbreak.

Although Chinese schools and universities forbid pupils from having animals in residence halls, many students still attempt to keep them discreetly.

A similar incident happened to another Chinese student, Duan, who discovered his dead pet turtle at his dorm when he returned to his university in May, Chinese media reported.

The final year student from Baoshan University in Yunnan province of south-western China was left heartbroken when his pet reptile of four years had died during the coronavirus lockdown.

He said in a social media post on May 18 that he adopted the turtle after spotting it on campus.

‘My son is gone,’ Duan wrote. ‘He accompanied me for four years.’

Eerie sight of thousands of freshly dug graves in Johannesburg