It’s almost impossible to walk with single-minded purpose down Main Street in Flushing, Queens. Everything entices: a cart selling hot roasted chestnuts still in their shells; a poster promising dried sea cucumbers, dark and warty; a bakery where spider-cracked tea eggs steep in inky broth in a rice cooker on the counter.

Resist temptation, and keep heading south, where you’ll find Nurlan, next to the Super Halal Meat Depot and across from the Queens Botanical Garden. It’s one of the rare restaurants in New York City to specialize in the food of the Uighurs, a historically suppressed Turkic and Muslim minority in China, who for centuries have made their home in the Xinjiang region in the country’s northwest.

Foremost on the menu is laghman, hand-pulled noodles traditionally made by swinging a thick rope of dough in arcs, then bringing the ends together at the top with a slap, so the dough hanging below spirals in on itself. This is done repeatedly until the strands are thin enough to stretch out horizontally on a flat surface, where they’re brushed through drifts of flour or glossed with oil as they grow skinnier still, trussing the noodlemaker’s hands like a skein of yarn.

The noodles are long enough that when they arrive at your table after a brief boil, you can lift them with your chopsticks and keep lifting until your arm is fully extended over your head. They bend but do not break, and are distinctly earthy and chewy; I wanted to eat each one down to the very end. 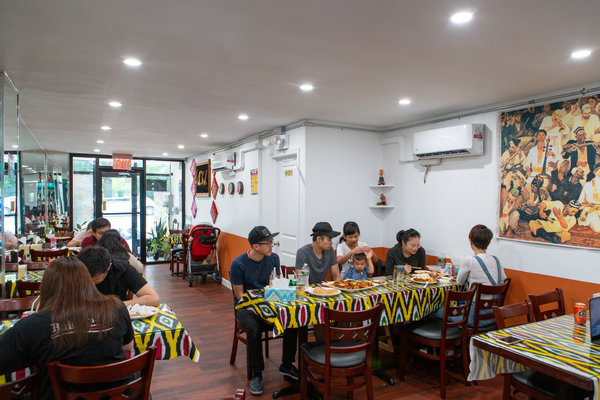 Elsewhere in Central Asia, laghman is often submerged in broth, but here the noodles are cooked on their own and then given a ladling of beef stew. “Soup is soup; laghman is laghman,” said Adil Nurdun, who grew up in Toksun County, south of Xinjiang’s capital, Urumqi, and runs the restaurant with Arkin Ali, a native of Aksu Prefecture to the west, bordering Kyrgyzstan.

Two accompanying stews are on offer, but when asked to explain the difference, Mr. Nurdun demurred. “I cannot say one is better,” he said. Clipped long beans and curls of red bell pepper in one give way to crushed tomatoes and floppy wood-ear mushrooms in the other, but in both the crucial note is black vinegar, underscored by chiles in a righteous fury.

The hand-pulled noodles, made daily, are also hacked into little stubs to make ding-ding noodles, a dish I’ve encountered at only one other restaurant in New York, the Hand-Pulled Noodle in Harlem. Other laghman ingredients are reprised at the same small scale, so that each is present for a single vivid bite.

Beyond the noodles, the menu is more approximate in its pleasures. On a recent evening, lamb kebabs refused to yield, and their coat of cumin registered less as seasoning than decoration. (This didn’t stop another diner from joyfully tearing the meat right off the swordlike skewer with her teeth.)

In Xinjiang, the Uighur bread called nan is shoveled out of a tandoor in great smoky rounds with raised, bumpy edges and a surface pricked with curlicues. The version I tried here, delivered to the restaurant by an Uzbek baker in Brooklyn, was closer to an overgrown bagel.

But I would return any day for the noodles, along with a dish widely known by its Chinese name, dapanji, translated as big plate chicken. The meat is cut to order, which means you will wait and wait. It will be worth it, for the throb of fermented black bean sauce and the raving chiles, and for the flesh still clinging to nubs of bone.

The dining room is narrow and spare, with wood floors and tables dressed in bright yellow prints from heirloom Uighur silk atlas (a form of ikat). Miniature stringed instruments hang on the wall: fretted lutes like a giraffe-necked tembur and a rawap with ornamental goat horns.

The population of Uighurs in New York is small, but love for the cuisine goes past borders. Many of the diners at Nurlan are Han Chinese with roots in different parts of the country. “They know we’re serious about our food,” Mr. Nurdun said.

He is a generous host, ever ready with a glass of tea. We talk of food, its memories and comforts, and for a moment we pass over in silence the troubles of the outside world.

F.W. Johnson Collegiate placed in secure-the-building mode after report of nearby shooting