THE UK's coronavirus death toll has risen to 41,501 today after another two people died with the deadly bug.

And the number of people who have tested positive for the virus overnight remains well above the Government's 1,000-a-day threshold, with 1,406 new cases. 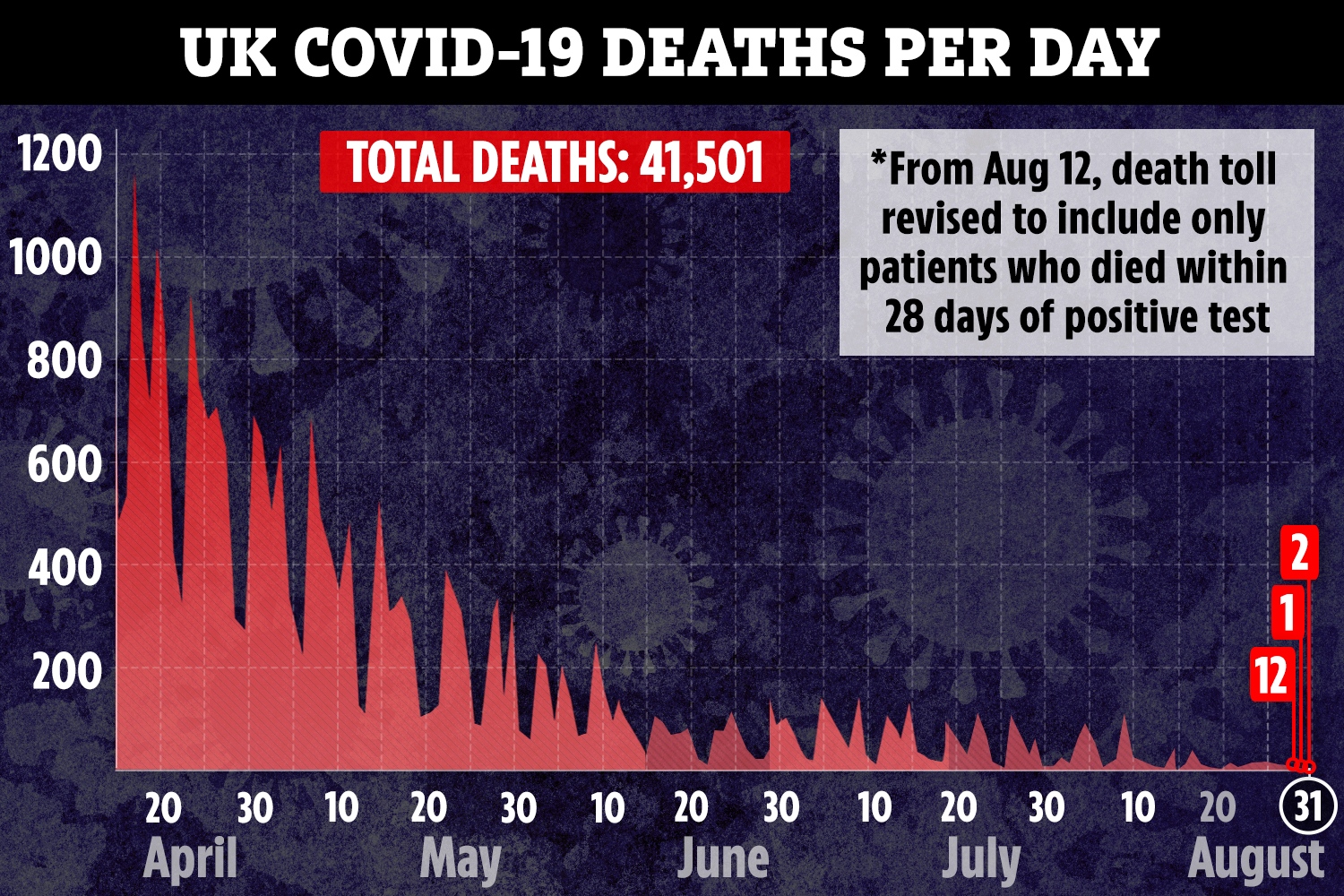 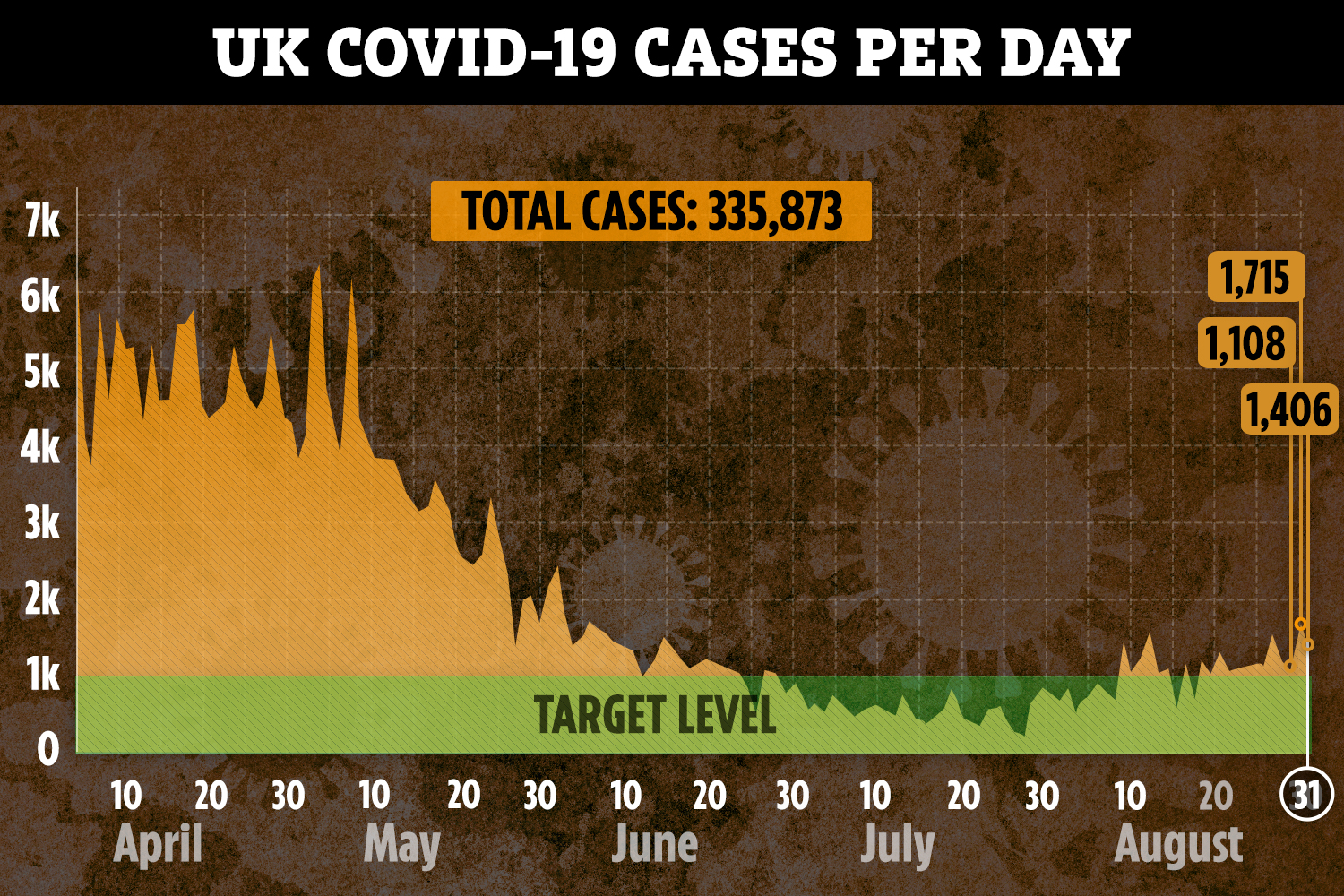 In England, four more people died in hospital with the virus.

The patients were between 58 and 75. All had known underlying health conditions.

In both Wales and Scotland, there have been no more fatalities recorded.

Figures for Ireland haven't yet been released.

The discrepancy in the figures is based on when they were recorded.

All deaths in England happened between June 16 and August 29 and were registered as coronavirus-related deaths within the past 24 hours.

The Department for Health figure for the UK also takes into account deaths that occurred outside hospitals, for example in care homes and other settings, in the past day.

The new total was reported after one person lost their life to the virus yesterday – the lowest daily total since the crisis took hold in the UK.

It's raised hopes that Britain may soon see its first day without a fatality since early March.

The first Brit to die from the illness lost his life on a cruise ship off the coast of Japan.

The man was the sixth passenger on-board the Diamond Princess cruise ship to die from the illness.

By that point, 20 people in the UK had been diagnosed with the illness.

The first death – that of a woman in her 70s, who died at the Royal Berkshire Hospital in Reading – was reported on March 5, although she died on March 3.

Britain went into lockdown on March 23. 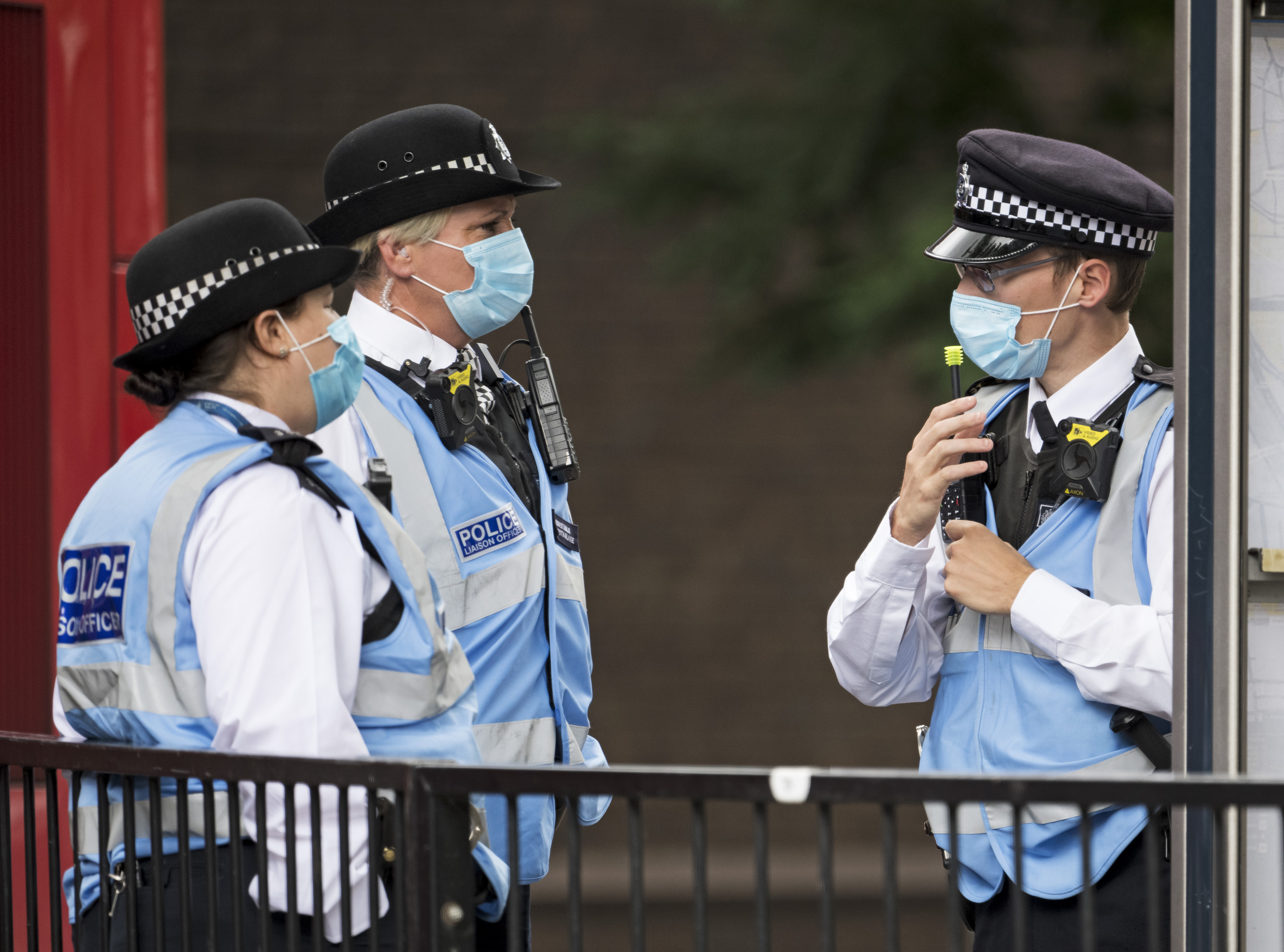 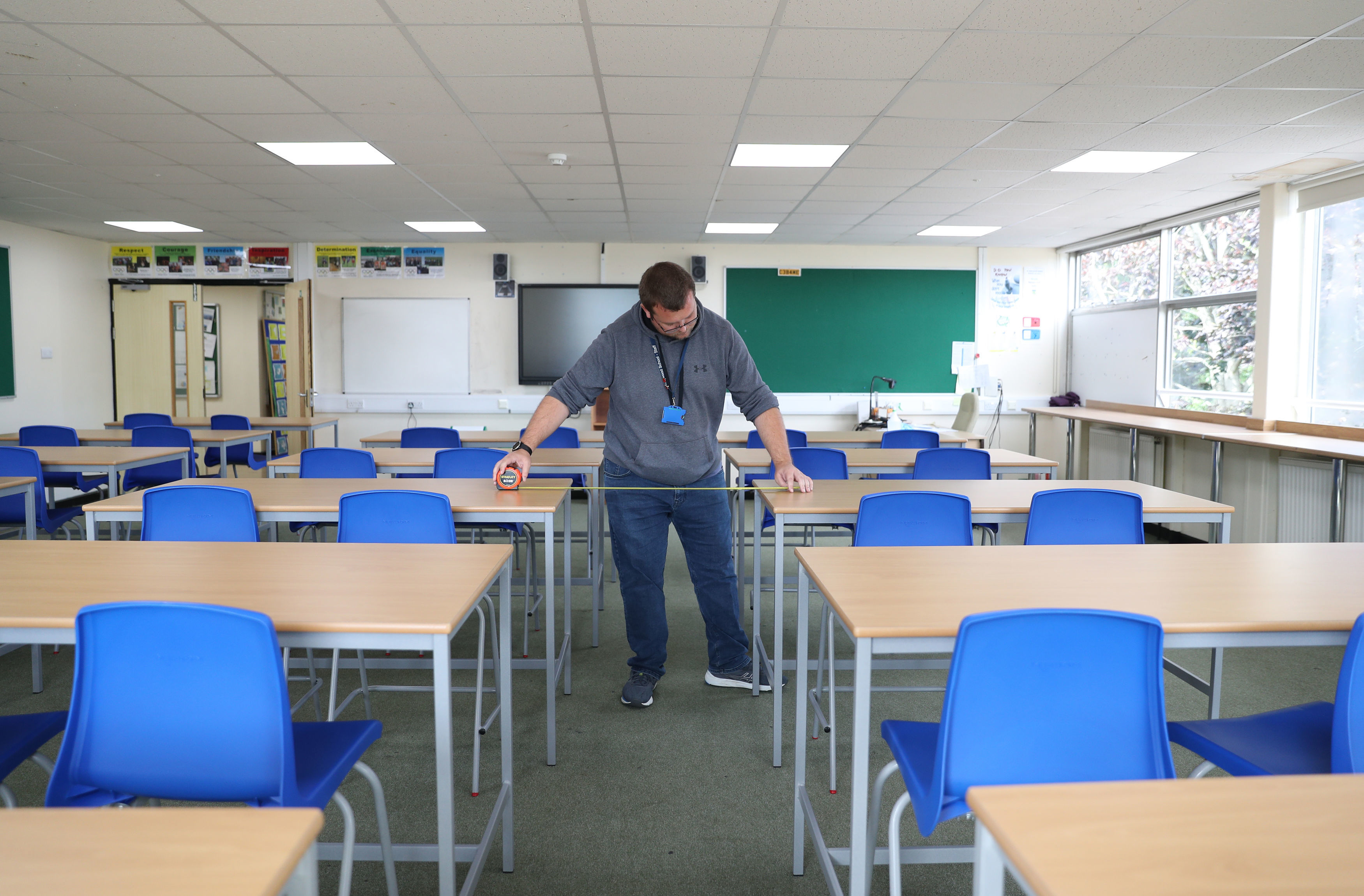 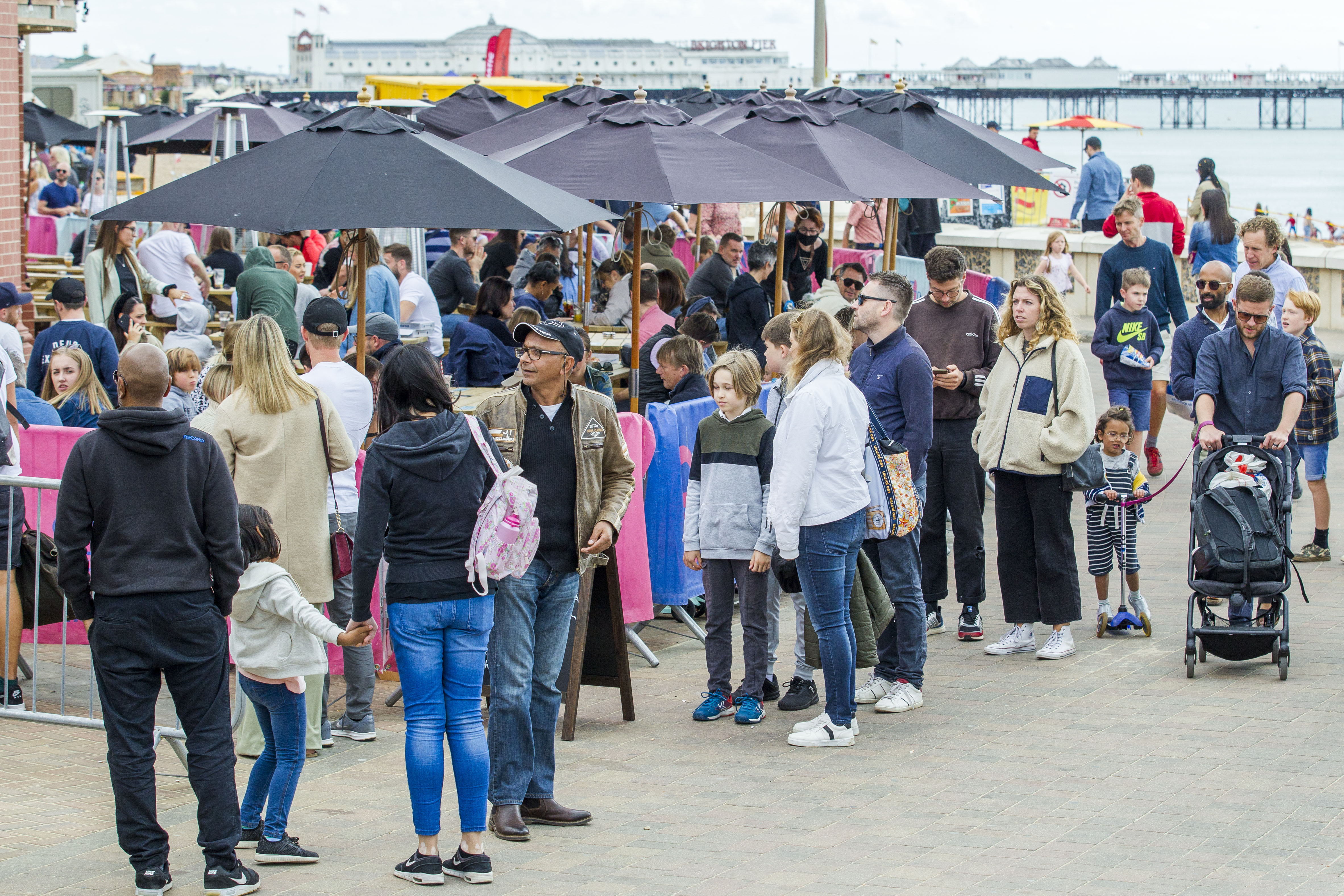 Today's death toll comes as schools prepare to reopen to all pupils next week as Brits take more steps towards economic recovery.

When children return to class, it will free hundreds of thousands of workers to head back to their offices for the first time in six months.

However, there's a warning next year's GCSE and A-level exams have a '50:50' chance of being scrapped – because kids won't have time to catch up.

And it's today been reported that pupils could be sent home for 'joke coughing' – because detention classes can't be socially distanced.

Children could also be disciplined for using the wrong toilets in the new policies introduced as schools across the country are set to reopen.

Meanwhile, Brits have been warned that Covid-19 hasn't gone away after a plane-load of people returning home from their holidays were told to self-isolate.

Everyone who travelled on-board Tui flight 6215, which arrived in the Welsh capital on August 25, must stay at home for two weeks and get a test, health chiefs say.

One passenger now says the jet was "full of covidiots" who failed to wear masks and respect social distancing rules.

And a curry house in West Yorkshire has shut after seven employees tested positive for the virus.

The cases at Akbar’s in Bradford have been reported in the past three weeks, with the last known case reported on August 20.

It's also the last day for the Eat Out to Help Out scheme – but Chancellor Rishi Sunak has urged Brits to keep going for dinner to kick-start the economy.

Despite the end of the Government-backed scheme — which saw bills reduced by half, up to a £10 per person limit — several restaurants and pub groups have decided to continue with their own deals.

UK cinemas could reopen with strict social distancing by mid-July