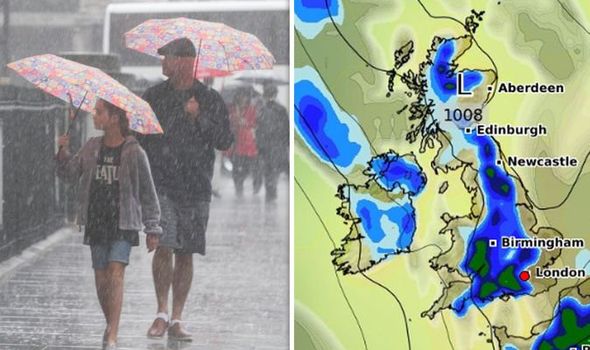 For many across the country it was a dreary and grey day yesterday and for many, it could be the same on Saturday. The Met Office has warned that there could well be “heavy and prolonged” periods of wet weather across the country. In one small glimmer of hope for Britons across the nation, where there are patches of sunshine temperatures could hit as high as 19C.

Commenting on this weekend’s weather, Net Office Meteorologist, Helen Roberts said: “It will be a cloudy start to Saturday morning with a few showery outbreaks of rain elsewhere.

“There’ll be a lot of cloud and rain across Scotland.

“Across the bulk of England and Wales, it will be mostly cloudy with a few outbreaks of rain.”

Unfortunately for many in Scotland, the wet weather will continue into the afternoon with temperatures just getting up to 12C. 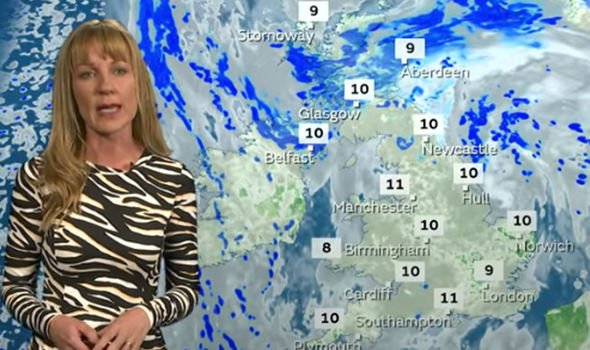 Moreover, as the wet weather begins to push southwards, Ms Roberts also revealed there will be “some showers” across England.

In the few areas where there are pockets of sunshine, however, it will “feel pleasant”.

Outside of those areas, there is the chance of showers which will be “slow moving” and could be on the heavy side.

For areas in the south-east of England, there could be temperatures in the high teens although it will mostly be cloudy. 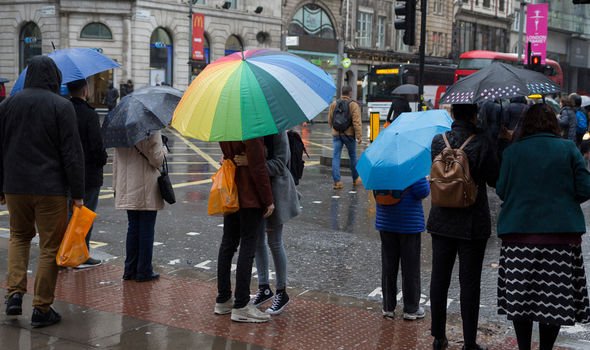 Ms Roberts added: “Through this evening any showers will start to fade away across England and Wales.

“The cloud though will persist across more northern and western parts of the UK.

“There will also be thick cloud and fog pushing in from the North Sea that will be a feature of the weather this weekend.”

Going into Sunday, Ms Roberts confirmed that it will be much the same as today – patches of sunshine but mostly cloudy with chances of heavy rain.”