A site once used to produce uranium rods for the Manhattan Project has partially collapsed into the Detroit River between Canada and the United States, officials say.

Michigan authorities say they are investigating the release of an unknown amount of construction aggregate material into the Detroit River, just across the water from Windsor, Ont. The spill happened on Nov. 26 at Detroit Bulk Storage on the western bank of the river, according to Nick Assendelft, a spokesperson for the Michigan Department of Environment, Great Lakes and Energy.

“There was some material that ended up in the river,” Assendelft told The Associated Press on Thursday.

He said a dock appeared to have collapsed on the shoreline.

Part of the riverbank also appears to have crumbled into the water under the weight of the construction material, according to reports in the Windsor Star and the Detroit Free Press. The Windsor Star first reported the spill on Thursday, more than a week after it happened over U.S. Thanksgiving.

Detroit Bulk Storage currently leases the site, which is directly beside historic Fort Wayne. The spot has a long history of environmental concerns dating back to the 1940s, when it was used by Revere Copper and Brass.

Revere Copper produced uranium rods and helped the U.S. build the first nuclear bomb as part of the top-secret Manhattan Project. The company continued to produce rods into the 1950s. The plant remained open until the 1980s, when it closed and was torn down. The land was vacant until recently, when Detroit Bulk Storage leased it.

The storage company’s owner, Noel Frye, says he didn’t know the site’s nuclear history but his understanding is that regulators have deemed it safe.

“As far as I’m concerned, this place has a clean bill of health,” Frye told the Windsor Star.

U.S. authorities have been monitoring the site for decades, but have not deemed the residual radiation levels to be high enough for a full cleanup, the Wall Street Journal previously reported.

The spill has sparked fears about Detroit’s water supply, because the intake pipes are downriver from the spill. It’s also prompted concerns on the Canadian side of the water. 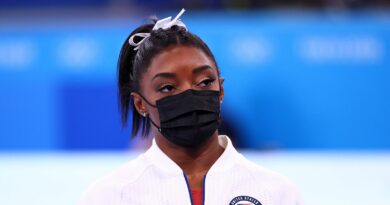 Tokyo Olympics: Simone Biles to compete in balance beam final after pulling out of other events over mental health concerns