Los Angeles: A federal appeals court has ruled the Trump administration acted within its authority in terminating legal protections that have allowed hundreds of thousands of immigrants to live and work legally in the United States, sometimes for decades, after fleeing conflict or natural disasters in their home countries.

The 2-1 ruling by the 9th US Circuit Court of Appeals effectively strips legal immigration status from some 400,000 people, rendering them deportable if they do not voluntarily leave. The decision affects the overwhelming majority of beneficiaries of a program offering what is known as "temporary protected status", which has permitted them to remain in the US after being uprooted from their unstable homelands. 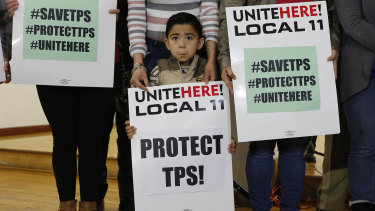 Mateo Barrera, originally from El Salvador, whose family members benefit from Temporary Protected Status is among those affected by the decision.Credit:AP

The Trump administration has argued that the emergency conditions that existed when people were invited to come to the US — earthquakes, hurricanes, civil war — had occurred long ago. The program, it said, had inadvertently conferred permanent immigration status for people from places like El Salvador, Haiti and Sudan, most of whom it said no longer needed safe haven.

The long-awaited decision does not immediately end the protections. The Trump administration has agreed to maintain them until at least March 5, 2021, for people from five of the affected countries and until November 2021 for people from El Salvador.

If President Donald Trump is not reelected, a new administration could choose to maintain the program.

The plaintiffs are almost certain to request that the decision be reconsidered by an 11-judge panel hearing the case. They could also ask the Supreme Court to take up the matter. 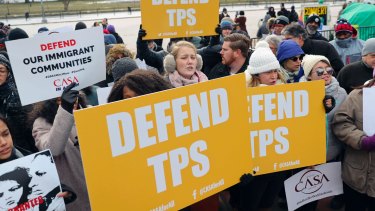 The appeal related to a Trump administration 2018 order to end Temporary Protected Status for legal migrants from countries no longer considered unsafe.Credit:AP

"It's a really devastating day for hundreds of thousands of people who have lived and worked in the country lawfully for decades," said Tom Jawetz, vice-president for immigration policy at the Centre for American Progress.

"But it's not the end of the line for them," Jawetz said. "There will be additional litigation, and ultimately the fate of these people may be decided by the outcome of the November election."

Proponents of limits on immigration hailed the decision.

"The 9th Circuit affirmed two clear aspects of TPS," said Dan Stein, president of the Federation for American Immigration Reform, said in a statement. "The first is that the T in TPS stands for temporary and that it is not intended, nor should it be, a backdoor to permanent residency."

He said the decision also made it clear that the government had discretion to determine when it was safe for immigrants given temporary protections to return home. For countries such as El Salvador, Haiti, Nicaragua and Sudan, he said, "the crises that triggered the TPS designation have long since passed."

The court's ruling could force many people who have been in the country for years, if not decades, to contemplate leaving their jobs, homes and communities to return to impoverished countries that are ill-prepared to absorb them. It also could result in the separation of families because beneficiaries have about 200,000 US-born children.

Ten countries are currently part of the temporary protected status program, signed into law by President George HW Bush in 1990. Only four were officially included in Monday's decision — El Salvador, Haiti, Nicaragua and Sudan — but nationals from two other countries, Honduras and Nepal, sued separately and a legal agreement calls for those countries to be covered by Monday's decision.

Nationals of El Salvador, the first to be offered temporary protected status, as a result of the country's civil war in the 1980s, represent about half of all recipients. Haitians received protection after the 2010 earthquake. Syria and Yemen were designated after civil wars erupted there.

Under the program, the secretary of Homeland Security decides when a country merits the designation and the status can be extended indefinitely. Bosnia and Herzegovina lost its temporary protected status after the end of its 1990s-era civil war, as did Guinea, Sierra Leone and Liberia after the Ebola crisis.

Determined to reduce immigration, Trump in 2017 began trying to scrap protection under the program for several other countries, meeting with lawsuits that temporarily blocked any cancellations.

The government extended protections under the program for beneficiaries from El Salvador, Haiti, Honduras, Nepal, Nicaragua and Sudan, who account for more than 90 per cent of the total, as the courts considered the legal challenges.

The appeal that was before the 9th Circuit argued that the government's decision to eliminate the program was motivated by Trump's animosity towards immigrants from non-white, non-European countries. Lawyers had cited his statements that were disparaging of Mexicans, Haitians and others from developing countries.

The plaintiffs also argued that maintaining the program was in the national interest because more than 100,000 holders of temporary protected status work in industries deemed "essential" during the coronavirus pandemic, including more than 11,000 healthcare workers and more than 76,000 food-related workers, according to the Centre for American Progress.

The US Chamber of Commerce said that revoking the program would adversely affect several key industries where recipients make up a significant amount of the workforce. Roughly one-fifth of construction workers in Washington, DC, are immigrants with temporary protected status, most of them Salvadorans.

The judges said the argument that the Trump administration was motivated by animus toward certain races or countries was unlikely to succeed. "Plaintiffs fail in their burden of showing a likelihood of success, or even serious questions, on the merits of their claim that racial animus toward 'non-white, non-European' populations was a motivating factor in the TPS terminations," they said in their opinion.

The panel noted that the administration extended temporary protected status for immigrants from some countries, including Somalia, South Sudan, Syria and Yemen, whose populations are also "non-European" and "non-white". Beneficiaries from those countries collectively represent less than 8000 people.

Ahilan Arulanantham, senior counsel for the American Civil Liberties Union of Southern California, who led the legal challenge, said the plaintiffs would keep pressing their argument through the courts. "The president's vile statements about TPS holders made perfectly clear that his administration acted out of racial animus," he said. "The Constitution does not permit policy to be driven by racism."

The Justice Department applauded the court's decision, which it said recognised that the government had the authority to make such decisions without judicial review. "We applaud the 9th Circuit's recognition of the plain language of the Immigration and Nationality Act and its rejection of the baseless accusations of animus behind the actions taken by the Department of Homeland Security," the Justice Department said in a statement.

The court vacated a 2018 preliminary injunction issued by Judge Edward M. Chen of the US District Court in San Francisco that had blocked the administration from terminating the program for immigrants from Haiti, El Salvador, Nicaragua and Sudan.

As part of their finding that the plaintiffs were unlikely to succeed on the merits, the judges said federal courts generally lacked the authority to review such decisions by the secretary of Homeland Security.

News of the decision caused dismay among immigrants living under the temporary protected status all across the country.

Veronica Lagunas, who came to the country 19 years ago from El Salvador and has two US-born children, said: "I am in shock. I am breathless."

Lagunas, 41, who owns a home in the outskirts of Los Angeles, said she had no ties with her home country. Her parents are also in the United States.

Two of the plaintiffs in the case are Cristina Morales, 39, who arrived from El Salvador at the age of 12, and her 16-year-old daughter, Crista Ramos, who was born in the US "I feel so much anger," said Morales, who is a teacher's aide in San Pablo, California.

Her daughter said the family would continue to pursue the case. "It's frustrating that the country could take a position like that," she said, "knowing that there are more than 200,000 children like me, born in this country, who might have to choose between going back to our parents' native countries or staying here without them."

Our weekly newsletter will deliver expert analysis of the race to the White House from our US correspondent Matthew Knott. Coming soon. Sign up now for the Herald‘s newsletter here, The Age‘s here, Brisbane Times‘ here and WAtoday‘s here.