EXCLUSIVE: Wealthy New York investment advisor who manages billions is sued for $5M by ex-girlfriend who claims he slapped her to the ground on a romantic getaway, called her a f**king b**ch and left her with a debilitating jaw disorder

A wealthy New York investment advisor is being sued for more than $5million by his ex-girlfriend who claims he assaulted and humiliated her on a trip to Jamaica earlier this year, in a violent outburst that has left her struggling with PTSD.

Yale educated Matthew Ram Shannon Lee, 45, is co-founder and partner of the Manhattan based investment advisor firm, Seven Bridges Advisors, which currently manages a staggering $5billion worth of assets.

Lee met Jenna Bickelmann, 33, a buyer for fashion store, Milly, through The League an exclusive dating app with membership plans costing up to $999 a month.

The app – whose name is a nod to Ivy League – bills itself as a ‘dating and social networking community’ whose members share the common thread of ‘ambition and a drive to succeed.’ 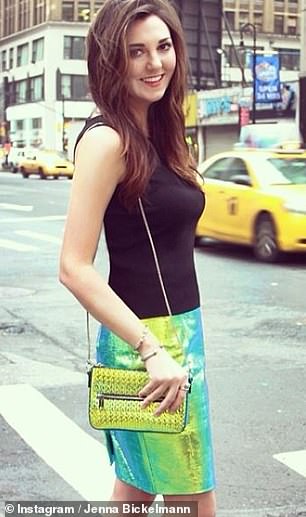 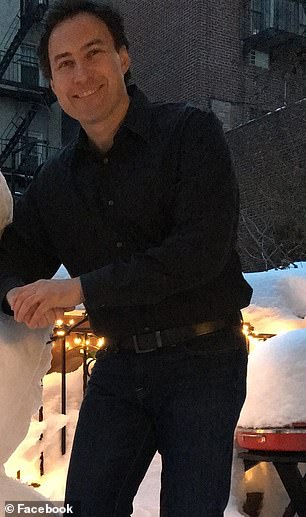 Jenna Bickelmann, 33, is suing Matthew Ram Shannon Lee, 45, for $5million over claims he physically and emotionally abused her during their months-long relationship, leaving her with PTSD 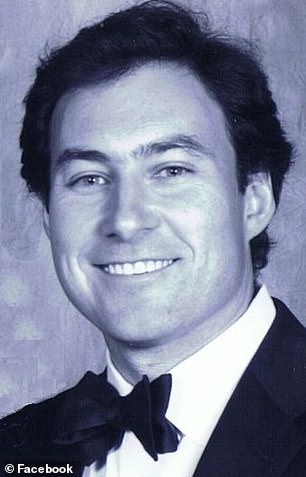 Lee is co-founder and partner of the Manhattan based investment advisor firm, Seven Bridges Advisors, which currently manages $5billion worth of assets

According to court documents obtained by DailyMail.com the couple met in person in September 2018.

Three months later, on December 29, Lee invited Bickelmann to join him on a business trip to Charleston, South Carolina where he was attending conferences at the elite, invite-only Renaissance Weekend.

The weekend was one of several organized across the country each year by an organization once co-chaired by Bill Clinton and Gerald Ford.

The weekends began almost forty years ago as a four-day house party thrown by former US Ambassador Phil Lader and his wife at their home in Hilton Head Island.

Exclusive and discrete they have been attended by Supreme Court Justices, Senators, Members of Congress and Governors, business leaders, astronauts, Olympic athletes, and Oscar, Emmy, Grammy and Nobel prizewinners.

Lee covered all of Bicklemann’s expenses including airfares so she could join him on the trip that spanned New Year’s Eve.

Guests were encouraged to enjoy Charleston’s, ‘cocoon of gentility.’

That ‘gentility’ didn’t even make it past New Year’s Day for Bickelmann and Lee who, she claims, got into ‘a heated verbal argument’ when she wanted to dine somewhere other than the restaurant he had booked.

Despite this, she agreed to join him on a trip to Jamaica later that month. The couple flew out on January 23 and stayed at The Lagoons, a gated community in Montego Bay where a two-bedroom villa can cost up to $15,000 a week. 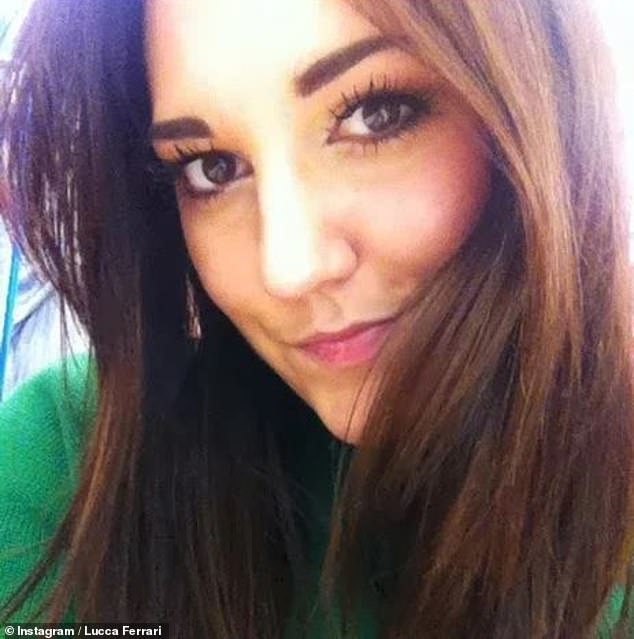 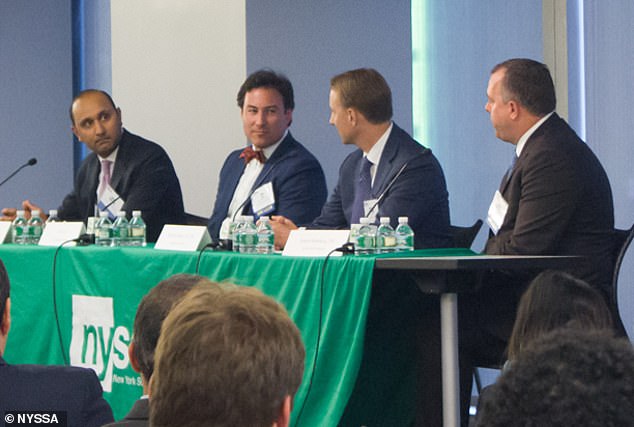 On the Jamaica trip, Lee ‘violently struck [her] on the right side of her face with the back of his right hand,’ according to court documents seen by DailyMail.com. Lee is pictured second from the left at the New York Society of Security Analysts (NYSSA) conference in 2016

As before, Lee paid for everything and, as before, things quickly descended into acrimony.

On January 25, two days after their arrival, Bicklemann claims, that Lee committed the first of two assaults against her after they got into an argument in a taxicab. 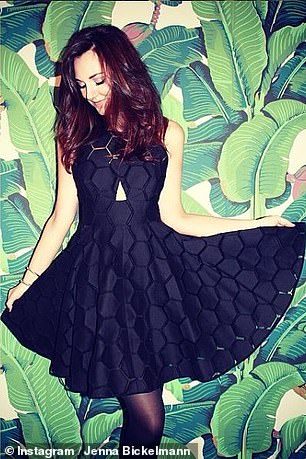 Bickelmann, who works as a buyer for fashion store Milly, is suing for damages to recover from ‘personal injuries, emotional distress, assault and battery’

According to her lawsuit, ‘Lee grabbed [her] face with his hand, shoved her backwards away from him into the seat of the taxi cab and called [her] ‘a f***ing b****.’

Shocked, Bickelmann called a male friend who advised her that Lee’s behavior was ‘abnormal and that she should leave Jamaica as soon as she could for her own safety.’

She told Lee that she wanted to return to New York and he agreed to change her departure flight from January 27 to 26 while he stayed on.

Her court filing states that Lee had planned a yacht outing at 1pm on the day of her departure and therefore told her to leave the villa and head to the airport at 12.30pm.

When she said she did not want to make the short trip – some fifteen minutes drive – so early as her flight was not until 3.30pm the couple got into an argument over the best way to lock up the villa.

Lee didn’t want to be late but nor did he want to leave the keys with Bickelmann.

According to Bickelmann the verbal argument turned violent when she attempted to leave the patio where they had been arguing and go back inside.

She claimed, ‘In the midst of removing herself from this argument with [Lee] who was continuously yelling at her in a degrading manner and cursing at her, [Lee] violently struck [her] on the right side of her face with the back of his right hand.’

The hit was so unexpected and violent, she claims, she lost her balance and fell onto a nearby patio chair. 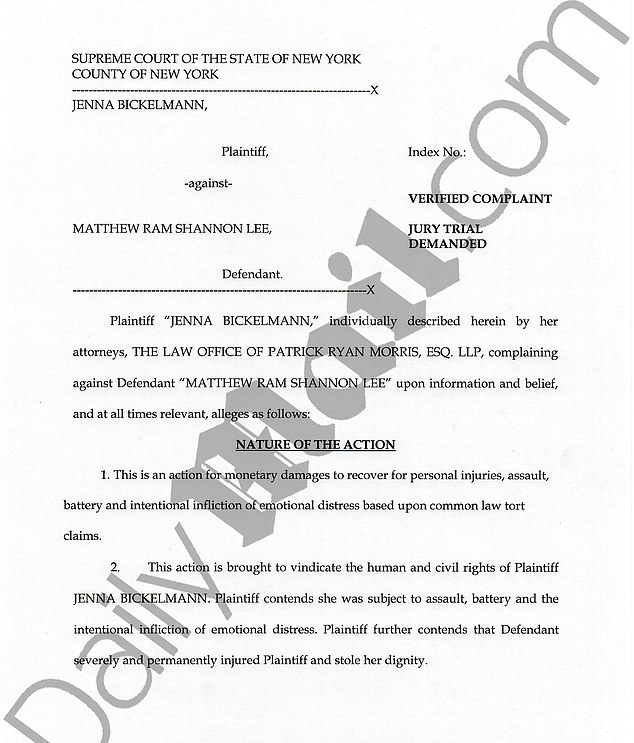 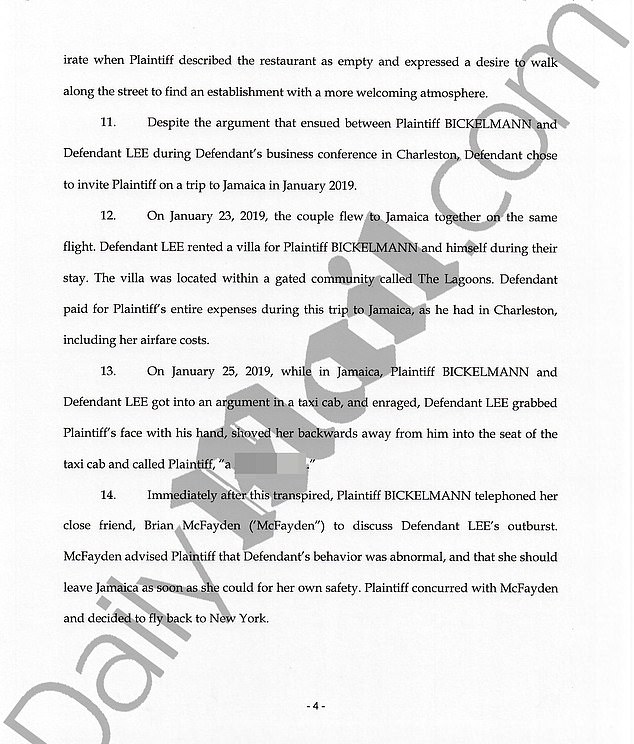 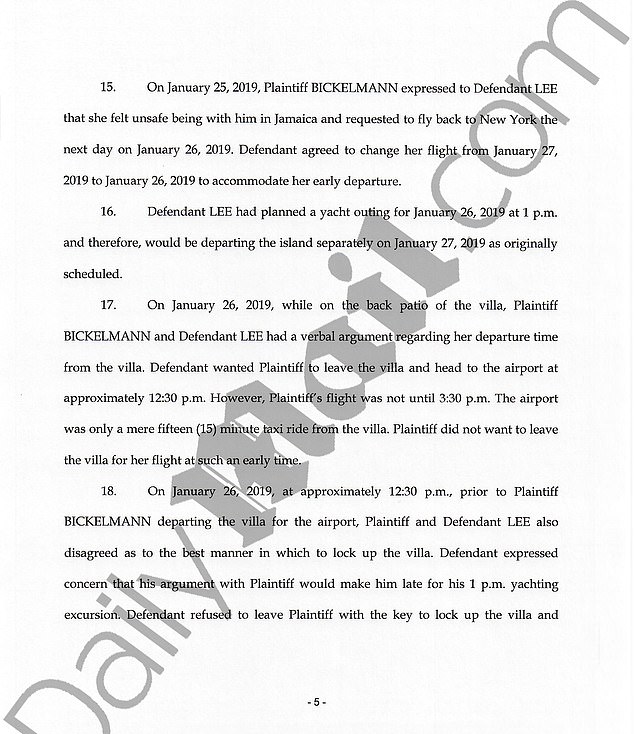 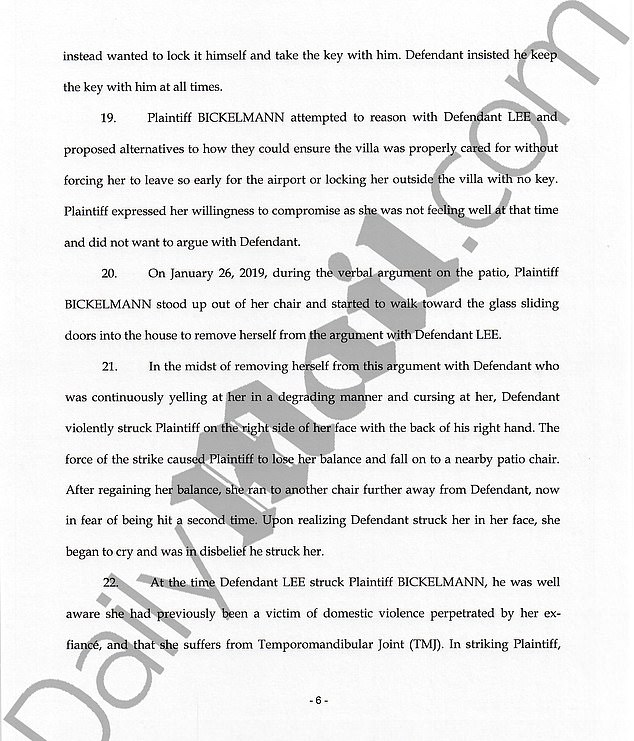 After regaining her balance, her complaint continued, ‘she ran to another chair…now in fear of being hit a second time… she began to cry and was in disbelief he struck her.’

Bickelmann claimed her face ‘began to swell and become very red,’ and that she repeatedly stated, ‘Ram you just hit me!’

Her screams and their shouting were loud enough for a concerned neighbor to call The Lagoons Security who witnessed Lee pull the weeping Bickelmann back into the villa and shut the sliding glass doors.

The alleged assault was made all the worse, Bickelmann has claimed, by the fact that Lee knew her to be a victim of domestic violence and that she suffered from Temporomandibular Joint Disorder causing her severe pain in her jaw.

She has also been diagnosed as suffering from Post Traumatic Stress Disorder as a result of the alleged assault.

DailyMail.com has requested comment from both Lee and Bicklemann’s attorney, but have not heard back.

Suspect is shot after fighting Calif. deputy for gun in encounter caught on camera