Wellington: It's the question keeping many politicos and those in New Zealand's Parliament guessing. Where is Deputy Prime Minister Winston Peters?

Peters has been missing in action for the past month, and no one – least of all the NZ First leader – is making clear when he will return. 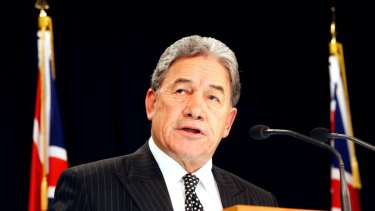 The sometimes cantankerous septuagenarian and political mainstay has only a small Twitter trail of activity as proof of life.

"Out walking the dog Beau. Both getting fit and enjoying the fresh air," he posted on Wednesday.

Last month, he posted a video thanking his medical team and supporters, saying he would be housebound "for a few days until we get the clearance to travel and all the work is coming in".

He also posted a bizarre attack on Deputy Opposition Leader Paula Bennett, who sent him flowers in hospital.

"They looked like she just picked them from a local park! Gave them away to an elderly patient. Not knowing their origin, she really appreciated them."

The government's refusal to answer basic questions on his absence has raised plenty of eyebrows.

His staff have flat-out refused, several times, to answer the date of Peters' surgery, the nature of the surgery, or when he would be back.

Peters has not given any interviews during his break from parliament, leaving Ardern to explain her deputy's absence.

"He's still waiting for clearance to fly," she said on Monday.

"He doesn't believe it will be too far away. He was in good spirits when I spoke to him, though, and work continues on. He's obviously working from home while he awaits that clearance."

Government insiders have said Peters, 74, had a minor knee operation and the prevarication of his staff can be attributed to the fact he doesn't like drawing attention to his age or frailties.

When asked why he simply wouldn't get the train to Wellington to attend Parliament, Ardern laughed off the idea.

"You should ask him that yourself. In fact, I dare you to," she said.

"Maybe he's factoring in the discomfort of that. He has had a medical event."

If there's one truism of Kiwi politics, Peters won't be held back.

Since his first election to Parliament four decades ago, rarely has this political force been missing for so long.

Peters was first elected to parliament in 1979, serving all but six years since then.