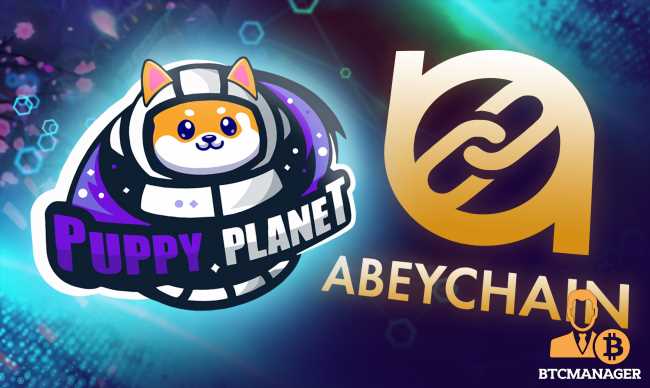 As per a press release on December 15, the play-to-earn game is a puppy Gamefi combining exciting aspects from highly successful Axie Infinity such as smart contracts and the ability of gamers to make money by participating in an in-game NFT collectible market.

As of the game’s release the PUP token was trading around $1.25, an increase of nearly 1200% for early players.

There are multiple reasons that Puppy Planet developers chose ABEYCHAIN as the blockchain to launch their game on.

In November, ABEY won the prestigious Blockchain Solution of the Year at the Europe AIBC Awards 2021. Philipp Sauerborn, the co-founder and director of the ABEY Foundation, said this recognition was a significant milestone for its team of developers.

“This prestigious recognition is the result of countless hours of hard work from our ABEY team and the developers running their apps on our blockchain. We are committed to growing the ABEY ecosystem to bring our users the best solution that we possibly can. We are grateful AIBC, and its expert panel of judges has noticed our passion and excellence.”

There are over 140k active users in ABEYCHAIN. On average, the chain has been onboarding over 20k users every week. The rapid growth has sparked Puppy Planet’s rise, and has drawn in more developers – several more exciting, immersive games are now in the pipeline.

“ABEYCHAIN is one of the fastest-growing blockchains in the world. The addresses that the blockchain is adding show how active the ABEY community is. We believe that community makes ABEYCHAIN an ideal destination for gaming developers,” reiterated Sauerborn, and adding, “We are excited to welcome Puppy Planet as the first of many games featured on this award-winning blockchain solution.”

The launch of Puppy Planet follows the platform’s successful PUP presales and “Blind Box Sale” offerings which sold out.

The plan is for 180 million PUP tokens to eventually be released, 90 million of which have been allocated to game mining and interactive play on farms and battlefields. Players can acquire the native PUP token on XSwap, the first decentralized exchange on ABEYCHAIN. Users can now trade their USDT—and other supported cryptocurrencies—for native PUP tokens.

The “Blind Box Sale” offerings in November and December allowed early-entry fans to own rare in-game assets. The two offerings sold out within 10 minutes on each occasion.

In the presales, 5,000 Puppy Planet puppies sold – 2,000 Legend Puppy Gacha and 3,000 Ancient Puppy Gacha. The 75 hatched puppy images from those blind boxes will never be reissued. It is expected that their rarity will drive the market for their value higher and higher over time. These and other in-game assets are expected to create a thriving in-game ecosystem.

Following the launch of Puppy Planet, gamers can now create and trade NFTs using PUP as the primary currency. Players can also release earnings, props, and hatch pets at a higher level than previously possible.

Another plus, Puppy Planet has indicated that half the proceeds from shop transactions would be reinvested into mining pool rewards – PUP miners can potentially earn steady income while playing, and now also from mining.