The price of Ether (ETH), the native cryptocurrency of the Ethereum blockchain network, has been soaring since the beginning of the new year. What’s more, it has outperformed Bitcoin (BTC) since Jan. 1, gaining roughly 81% compared to Bitcoin’s 26% in their respective USD pairs year-to-date. 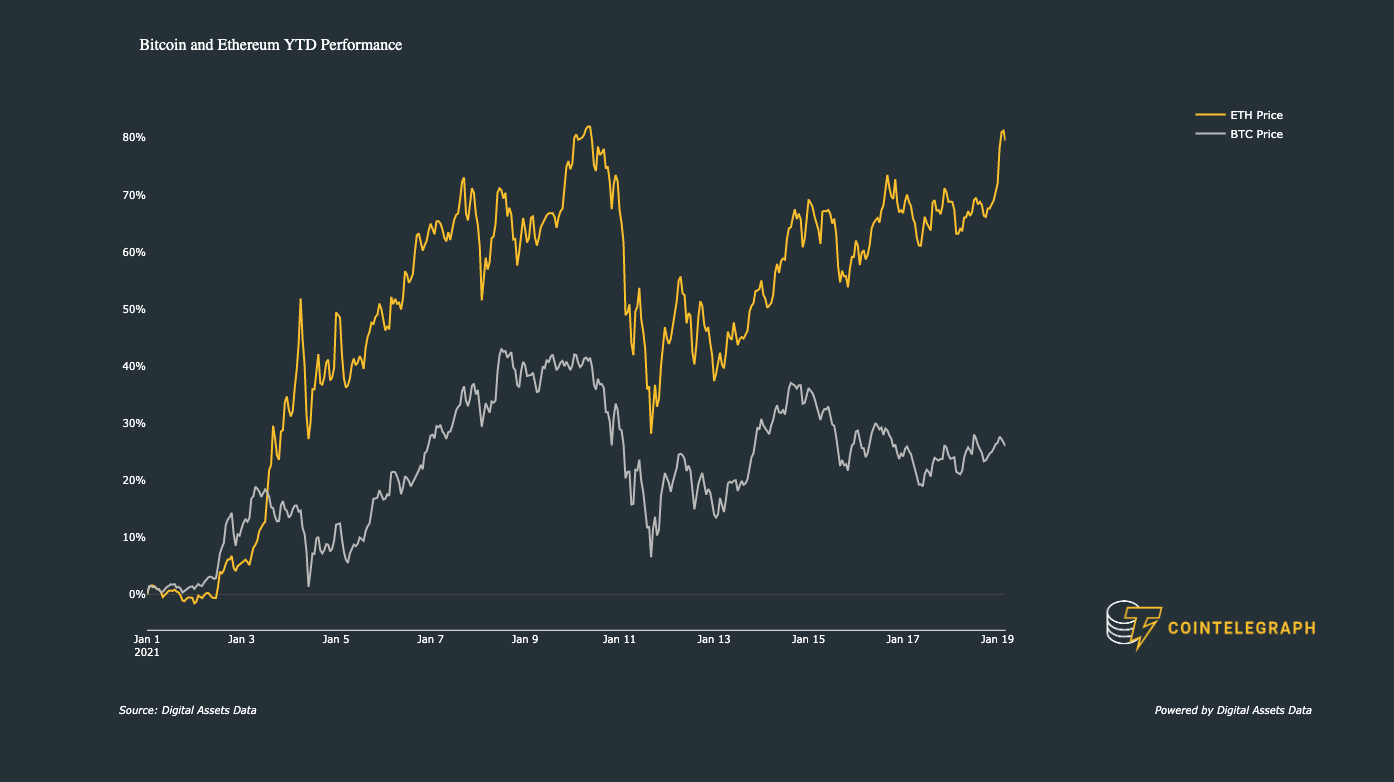 There are three main reasons why ETH has been outpacing BTC throughout the past several days. The factors are Ethereum’s accelerating growth, the improving sentiment around DeFi and BTC’s current period of relatively low volatility. 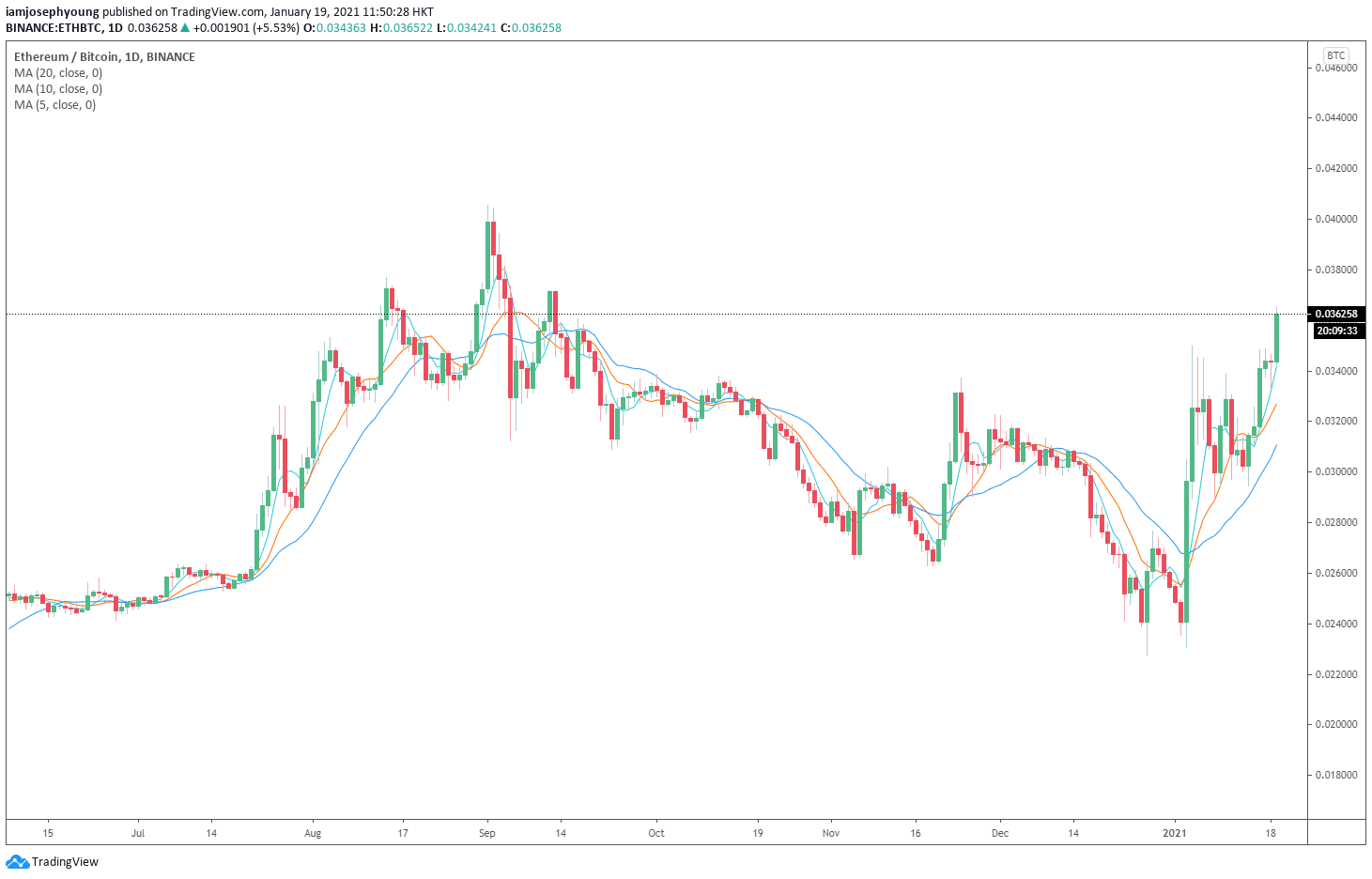 DeFi tokens have been surging rapidly as of late, led by majors such as Aave and SushiSwap, as Cointelegraph reported.

The rally of DeFi tokens is partly fueled by the fast-growing total value locked (TVL) of the DeFi market, which estimates the amount of capital deployed to DeFi protocols.

At over $24 billion, there is more capital locked across DeFi protocols than ever before, which signals massive demand. This is crucial for the momentum of Ethereum — and consequently its Ether token — because more and more apps and tokens rely on its network.

The rising number of users is shown by the massive uptick in Ethereum gas fees. Although high transaction fees are not ideal, Jacob Franek, a partner at DeFi alliance, said this is a positive factor because it shows the willingness of users to pay, indicating genuine demand. He said:

“Cumulative fees, yes. It’s the most direct measure of aggregate willingness to pay (i.e., demand) for block space. Ethereum has the most valuable block space in crypto now. Would it be better if individual tx fees were lower? Yes. That will come with L2 and other scaling efforts.” 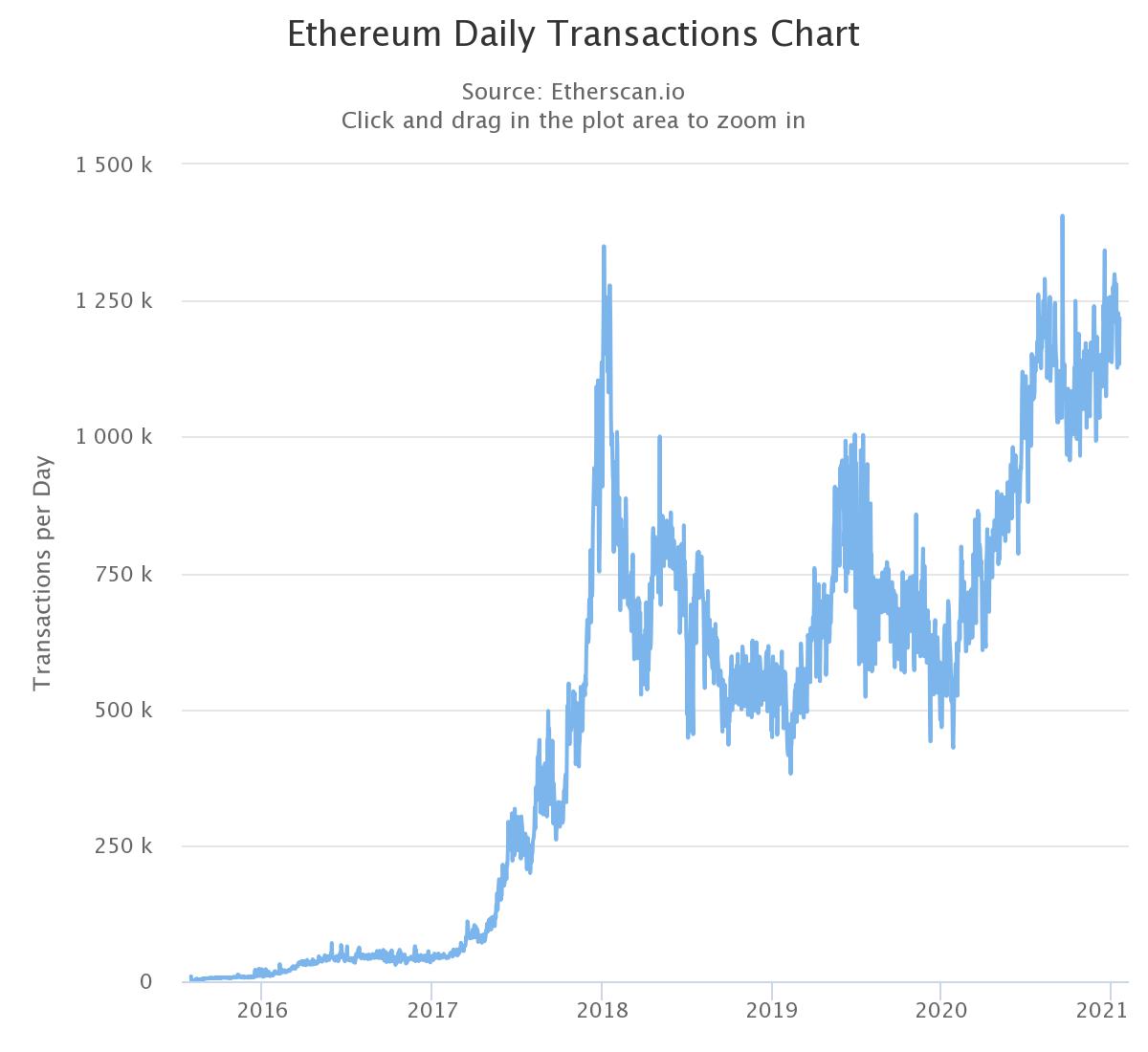 Other layer one blockchain protocols are growing with significant anticipation to compete against Ethereum, like Polkadot and Cosmos.

However, in the foreseeable future, Ethereum’s network effect and the combined value of DeFi protocols on Ethereum make it less likely that Ethereum’s dominance in the DeFi sector would be challenged in the short term.

BTC is consolidating with low volatility

Throughout the past several days, Bitcoin has been mostly consolidating with low volatility allowing many altcoins to catch up. This has led the demand for altcoins with lower volume and liquidity to increase.

The Ether price rally coincides with what traders describe as “altseason,” a period wherein many altcoins rally in tandem especially when Bitcoin sees small price movements.

This altseason — historically witnessed in the first months of the year — occurs when Bitcoin is ranging and investors seek high-risk plays. Altcoins usually see bigger price movements because their low liquidity makes them vulnerable to extreme volatility in short periods.

For retail and derivatives traders, the high volatility of the altcoin market makes smaller cryptocurrencies more appealing, at least in the near term, to trade over Bitcoin.

Meanwhile, BTC/USD remains in an uncertain position with some traders warning Bitcoin may break down from its range rather than continuing onto higher highs. If this happens, altcoins are likely to see larger losses compared to BTC. Jonny Moe, a cryptocurrency trader, said:

“Every time I start to convince myself to lean bullish, the longer I stare at this chart the more I start to get bearish again. I just really feel like this is going to breakdown and we close the weekly red, and I can’t shake that off yet.”