Bitcoin (BTC) starts a new week with a decidedly bearish move — but one that fails to shake investor confidence in the bull run.

A mixed weekend saw BTC/USD close above $47,000 only to lose all of its previous gains to challenge $45,000 support hours later.

It’s a delicate situation — not just Bitcoin, but stocks and sentiment are taking a beating as the Evergrande implosion in China unravels. What could affect the cryptocurrency market?

As analysts expect a “choppy” week for BTC price action, Cointelegraph takes a look at five factors worth considering when charting where Bitcoin might be headed in the short term.

Bitcoin spot price action is hardly inspiring for traders as the week begins.

A reversal of previous strength on Sunday was compounded overnight, and BTC/USD lost the $46,000 mark.

Amid turmoil in traditional markets, headed by the Evergrande saga in China, this week may well not end up offering profitable trades. For popular trader Pentoshi, now is the time to take stock and wait for the situation to resolve itself.

As Cointelegraph reported, $44,000 represents a support wall that Bitcoin now looks set to retest. A deeper dive could yet yield $41,000 or even $38,000, the latter forming a key Fibonacci retracement level.

Overall, however, the mood remains firmly in favor of upside returning across cryptocurrency markets into Q4.

Among those “buying the dip,” meanwhile, is the government of El Salvador, which on Monday confirmed that it had purchased another 150 BTC for total holdings of 700 BTC.

“They can never beat you if you buy the dips,” President Nayib Bukele said in a series of characteristically tongue-in-cheek tweets on his country’s Bitcoin policy. 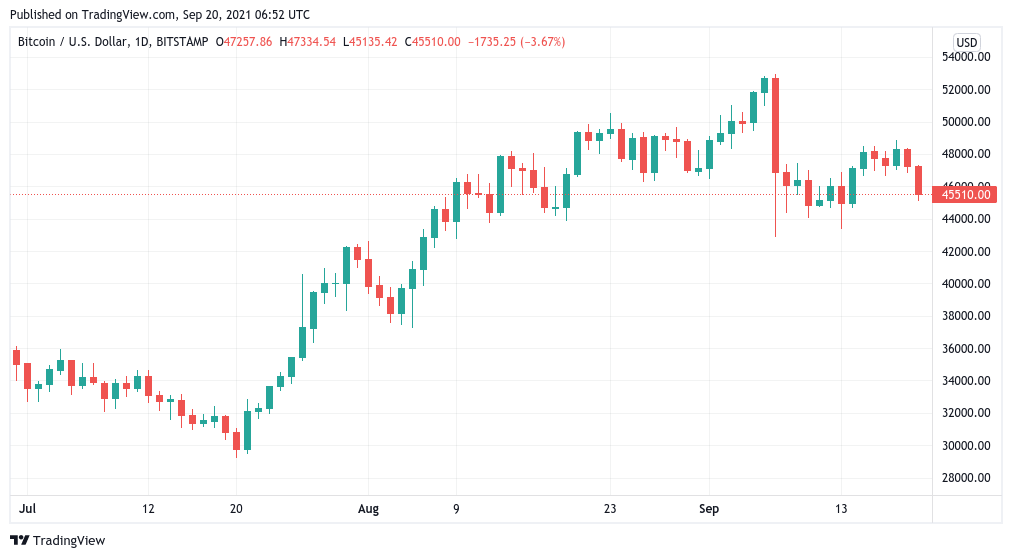 It’s a tough environment out there, and all things considered, Bitcoin is performing much better than expected, analysts say.

Whether it’s stocks or safe-haven gold, the picture is decidedly less rosy this week. The S&P 500, for example, is on track to close below its 50-day moving average for the first time since June.

Gold is heading toward its lows from April, while against the Nasdaq 100 Index, veteran trader Peter Brandt noted, the precious metal is almost at lows from 20 years ago.

“Given the dollar rise (it’s near cycle high), weakness in Stocks, plunge in metals, BTC is acting like a absolute champ as it rejects notion of moving into a deep Cycle Low. Relatively v.strong,” trader, entrepreneur and investor Bob Lukas wrote in a recent summary of the situation.

Should the status quo begin to change, the impetus for BTC to perform much more strongly is therefore clearly in place. 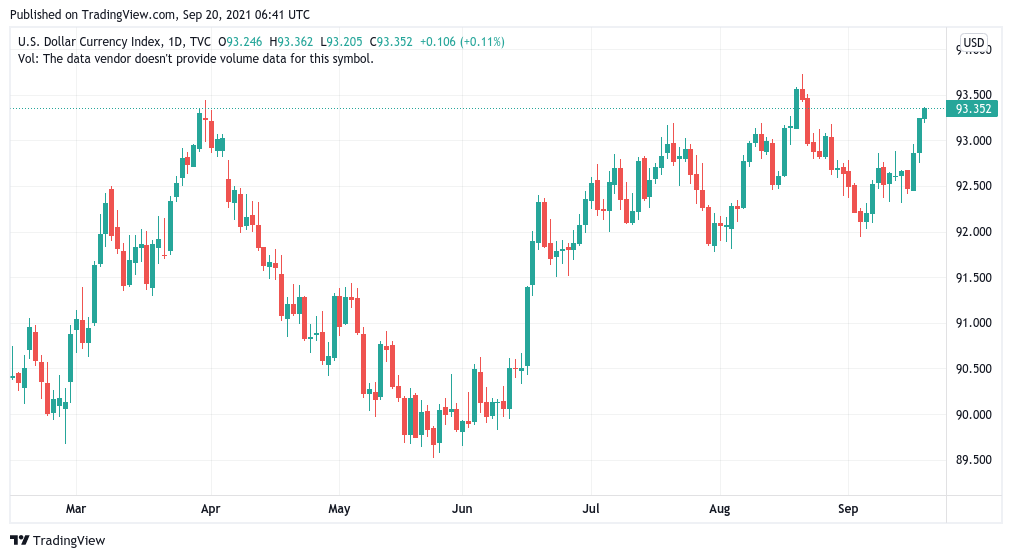 Bitcoin fundamentals have never looked better — a cliche, perhaps, but this week, the numbers speak for themselves.

Both the difficulty and hash rate are stubbornly refusing to trend downward, indicating that the underlying conviction of miners remains unwaveringly bullish.

The mining difficulty, which has been tempering the impact of May’s Chinese mining rout for months, is now due to put in its fifth consecutive increase on Tuesday.

This is a rare event — the last time that the difficulty increased five times in a row began in late 2019 before the March 2020 cross-market crash soured the mood. Even the subsequent bull market and run to $64,500 all-time highs could not replicate the achievement.

As such, for those who believe that price action must follow network fundamentals, the outlook seems more bullish than ever.

The hash rate confirms it — despite middling price performance over the past week, estimates continue to show 140 exahashes per second (EH/s) for the network, equating to just 17% below all-time highs.

For investor Vince Prince, a regulator commentator on the hash rate’s performance, the latest contrast between the metric and spot price is cause for confidence.

“This Shows a Relative Strength in Bullish Demand.” 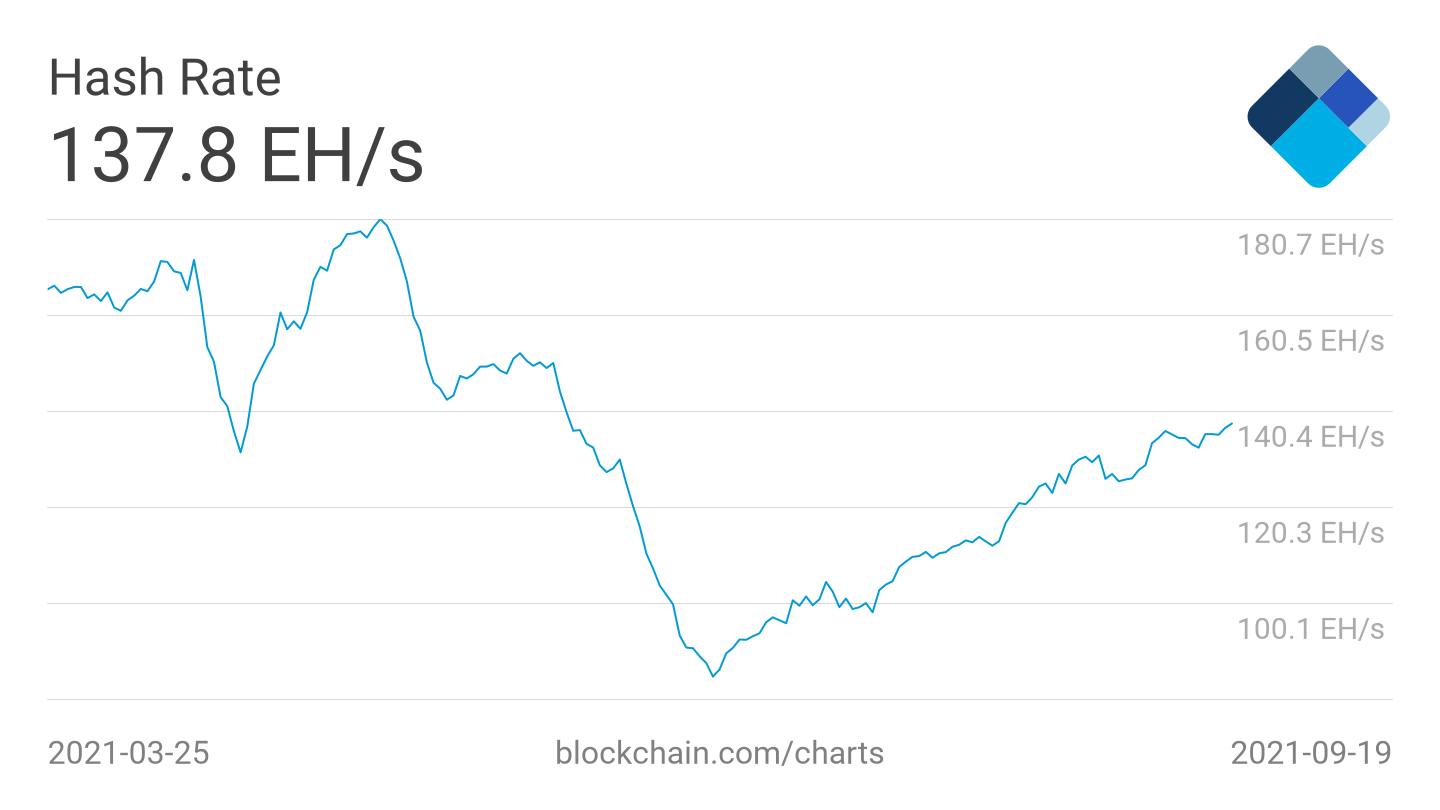 Zooming out, it’s “up only” 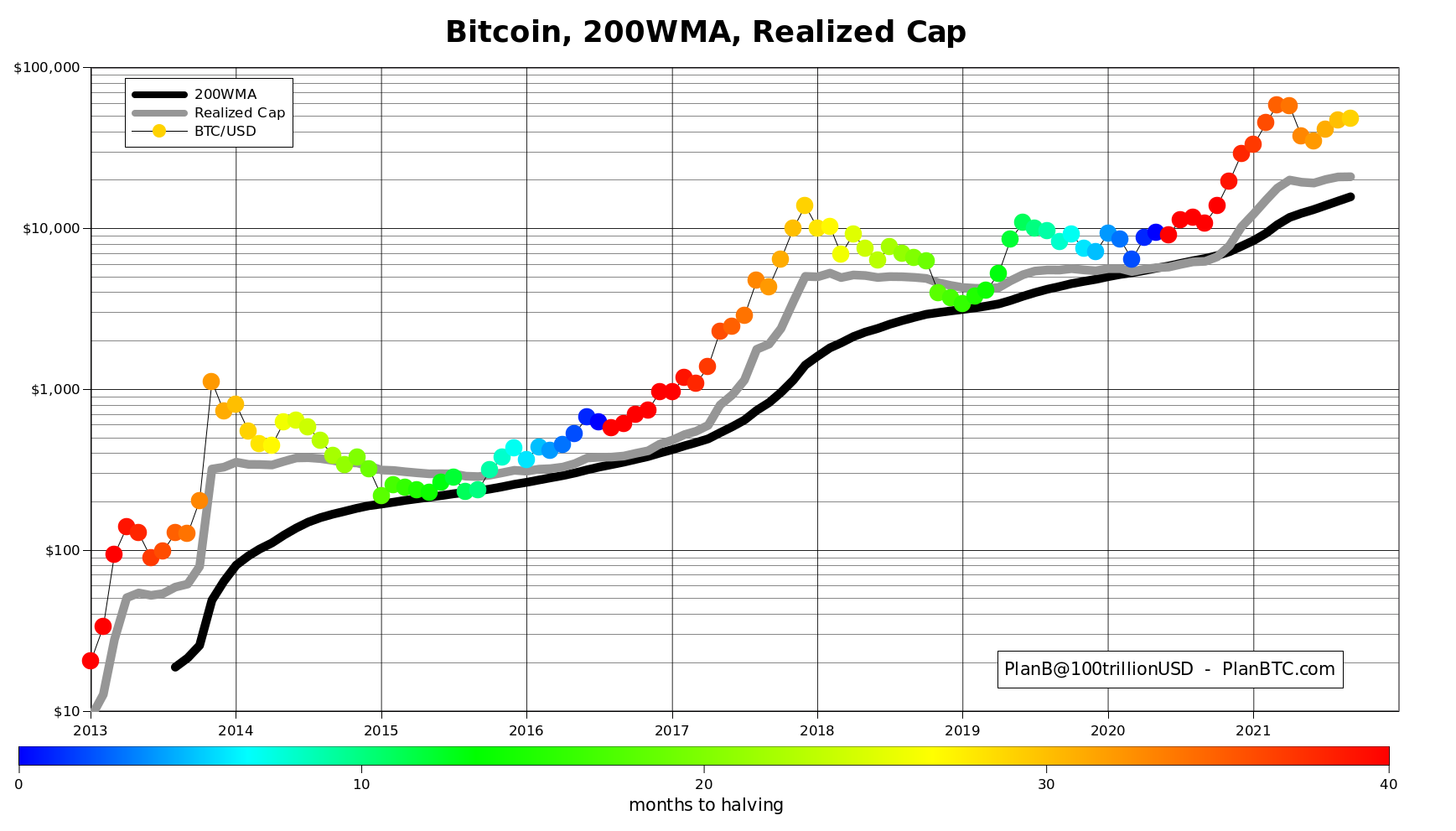 These are more than just numbers, says analyst PlanB, creator of the stock-to-flow Bitcoin price models.

The relationship between realized cap — an expression of the market capitalization based on the price at which each Bitcoin last moved — and the 200WMA is a useful gauge of market growth potential.

Previous price cycle tops, notably in late 2013 and 2017, were accompanied by a large gap between the two metrics. This time, however, the opposite is true — and the odds are on for Bitcoin being a solid “buy.”

As Cointelegraph reported, estimates call for a six-figure BTC price by the end of the year. Q4 should be the springboard, with October forming a firm foundation with a minimum monthly close of $63,000.

“The best bear market ever”

It’s a classic setup that has historically precluded major periods of bullish price action — Bitcoin is comparatively near all-time highs, but no one’s interested.

Despite trading at near $50,000, BTC/USD is a topic on fewer and fewer people’s lips this month — a trend also apparent across internet users.

Data from Google Trends shows that “Bitcoin” is just as unpopular as it was in mid-July when BTC/USD traded at just above $30,000.

Only in December 2020 was relative search interest lower, this coming before the main phase of the Bitcoin bull run really took off.

As analyst William Clemente suggests, however, such conditions are perfect for BTC price action delivering a surprise shake-up.

“Bitcoin broke out of a bull flag last night, set a higher high, funding at 0.01%, and my feed is dead silent. Excellent,” he tweeted Sunday, previously ironically describing current circumstances as the “best bear market ever.”

Investor sentiment is also ideally placed at present, with the Crypto Fear & Greed Index in “neutral” territory as Bitcoin circles final resistance before $50,000.

“Greed” has yet to return to feature significantly in crypto markets, the metric suggests, in line with the speculative trading wipe-out seen earlier in September.

New Jersey Man In Soup For Selling Bitcoin Worth $2 Million