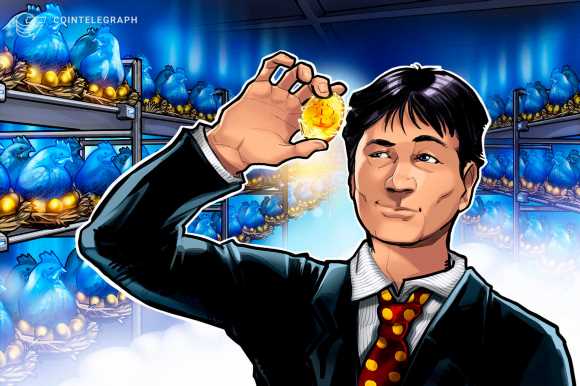 According to figures from monitoring resource Blockchain, daily revenues have surged by over 50%.

Bitcoin mining is currently in a unique state of flux — around half the hashing power is offline as miners relocate from China, and it remains unknown how quickly they will be able to come back online.

At the same time, those miners unaffected by the Chinese rout have seen half their competitors disappear overnight and profitability has gone up as a result.

With data now coming in for the past few weeks, the scale of the changes is plain to see. Daily mining revenue was around $20.7 million on July 2, the day before the difficulty adjustment. A day later, it hit $29.3 million, and by Tuesday this week $31.9 million. 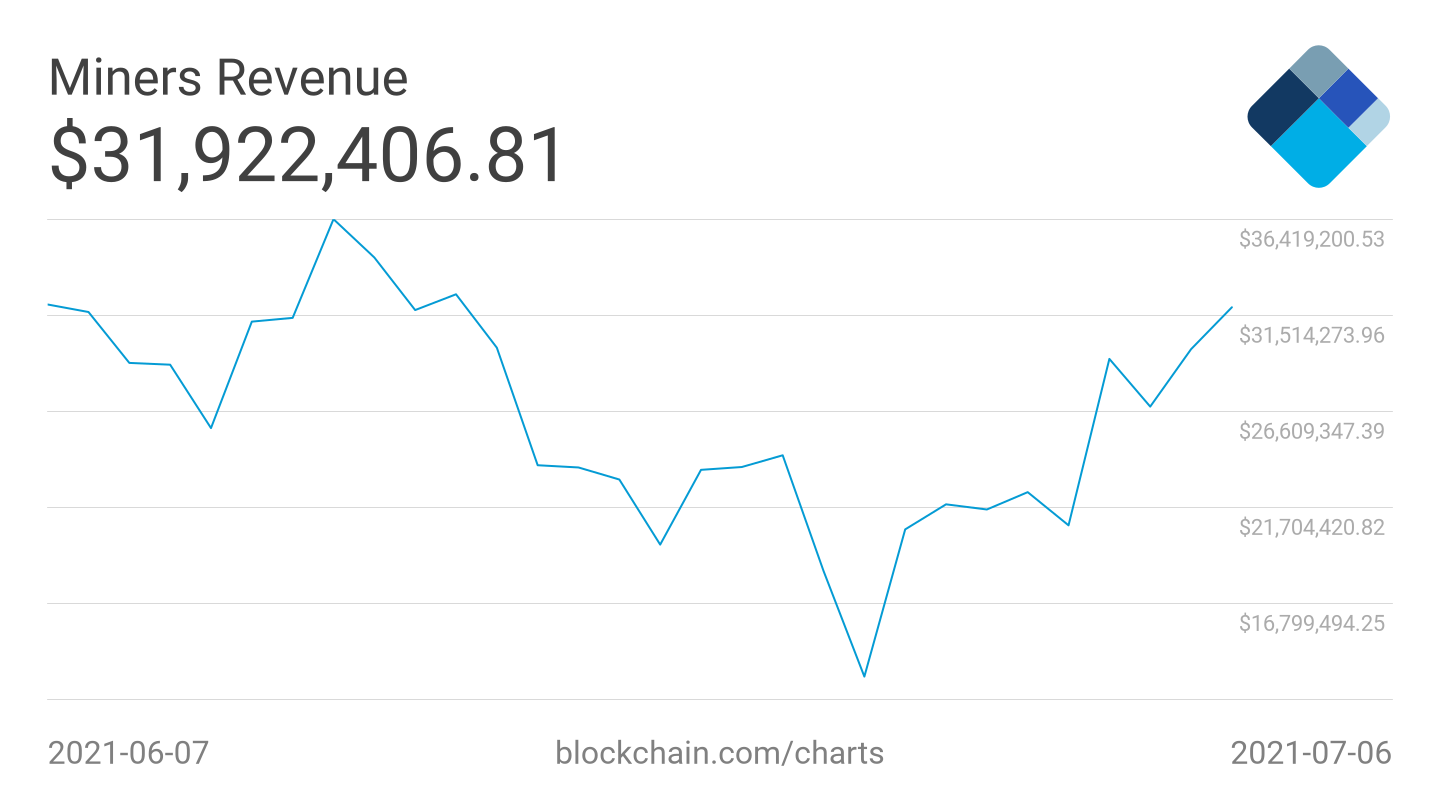 This is all a consequence of a “very interesting dynamic,” analytics firm Glassnode summarized in a video guide to this week’s edition of its newsletter, “The Week On-chain.”

“We have a very interesting dynamic where approximately 50% of the hash power is currently offline and incurring a great number of costs due to logistics and just simply not hashing, having hardware that’s not currently working, and the other 50% has essentially seen half their competition drop off the network,” it explained.

“Whilst the protocol’s now issuing the same number of coins as it regularly does, having difficulty wound down, we’re now in a situation where half the network has doubled their income and the other half of the network is essentially producing nothing.” 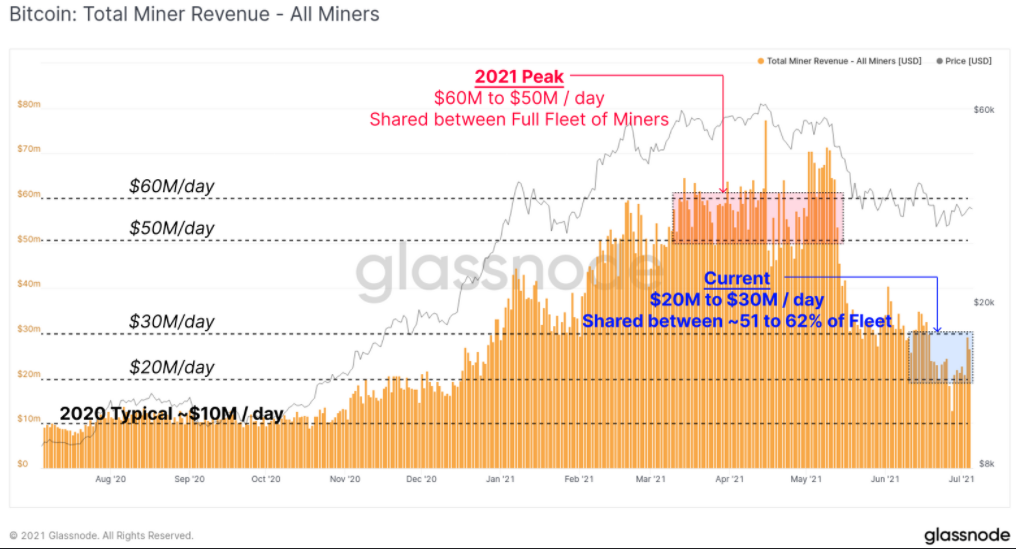 For active miners, profitability has reverted to around the levels seen when BTC/USD traded at $55,000-$60,000.

The result has been felt not just by miners. Average block times hit their highest ever over the past week, Glassnode added, beaten only during Bitcoin’s “bootstrapping” period in 2009-2010, before the cryptocurrency even had a solid price in USD. 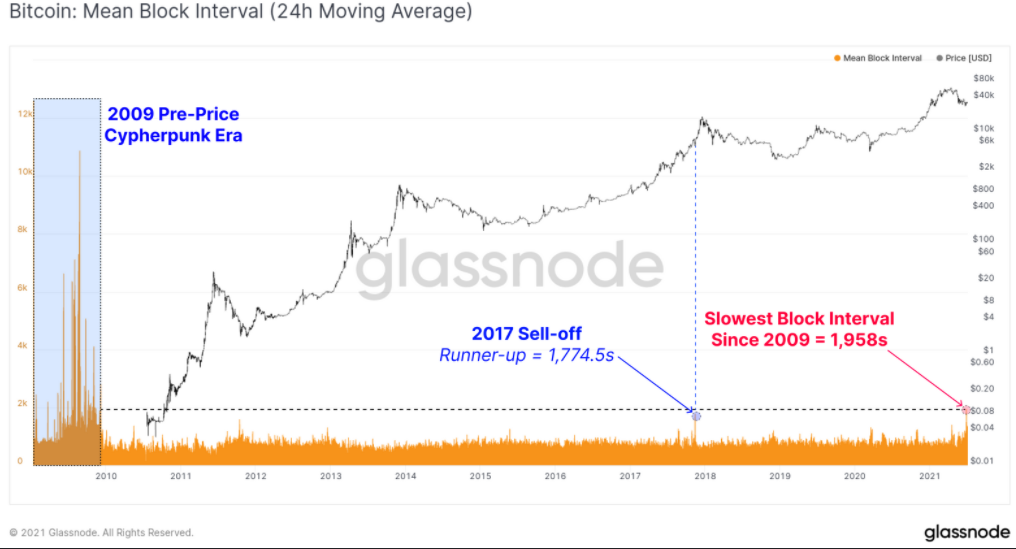 Other on-chain metrics likewise record the dichotomy between different groups of miners.

Related: An even bigger mining difficulty drop? 5 things to watch in Bitcoin this week

These show, among other things, how some are spending treasuries due to relocation costs while being unable to mine new coins and receive a share of block rewards and fees.

At the same time, others have been holding on to more BTC per block than they are spending — part of an uptrend which continues despite the drop in price which has also reached over 50%.

“This is certainly one to watch,” Glassnode advised.

Surviving on Bitcoin for a Day: Influencer Ryan Trahan Does a Test Ride