Bitcoin (BTC) is nearing the end of a consolidation period, which traders are betting will spark a fresh bullish breakout.

After consolidating in a broad range since hitting $30,000, BTC/USD is printing higher lows and lower highs on lower timeframes.

This narrowing wedge on the chart has a logical endpoint where volatility becomes practically zero — and historically, this results in a major move up or down.

“When it does, I think we break out to the upside in coming days.”

He added that a failure to break out could have the opposite effect, a nod to those already warning over a possible fresh bearish dip toward $20,000.

A look at the hourly chart, meanwhile, dictates a make-or-break moment for Bitcoin on Wednesday, at which point market trajectory in the near term should be decided.

The pattern of sideways trading following a major price move that culminates in a narrowing wedge and breakout — known as “compression” — is a classic chart phenomenon for Bitcoin. The process characterized much of 2020 in particular before the bull market truly kicked in to take BTC/USD past its 2017 all-time highs.

For Rekt Capital, meanwhile, an essential long-term chart feature is of interest following the $30,000 dip.

Bitcoin’s 50-week exponential moving average (WEMA) is back as support despite overall lower levels, and historically, this has been a key bull flag.

“In a sustained bull market, you can have a crash period which is very deep, but as long as this crash period maintains itself above this indicator of bullish momentum, the 50 WEMA, we can have that bullish momentum preserved and the price rally can actually continue afterwards,” he explained in a YouTube update on Monday.

As such, $30,000 may simply have been a “really hefty discount” rather than a bearish watershed for Bitcoin. 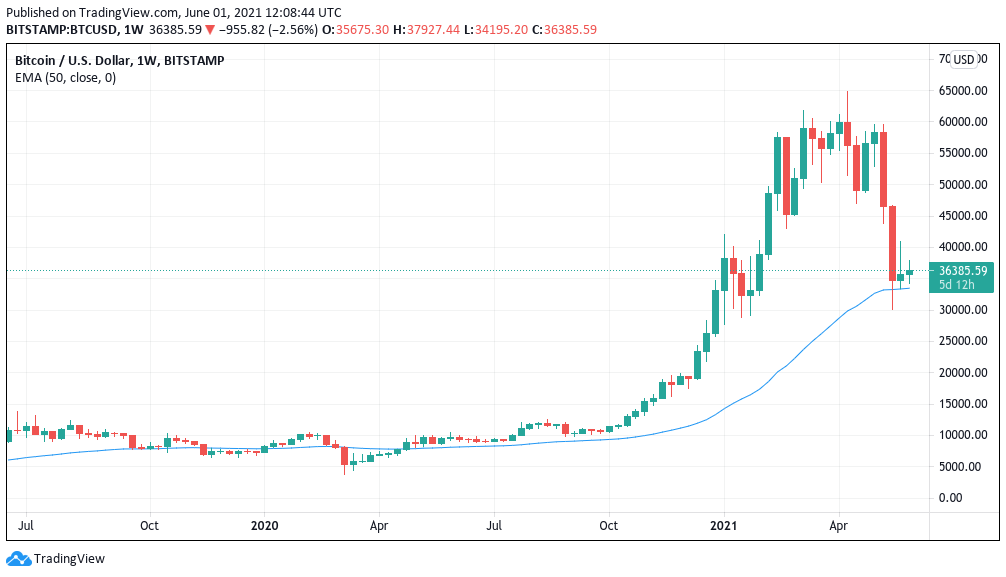