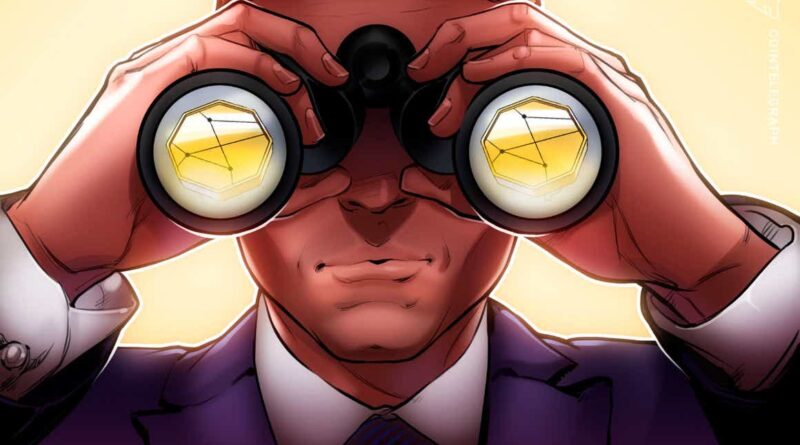 “Uptober” is over, but as Zhu Su tweeted earlier on Nov. 1, the crypto market rally could extend through “Upvember, Upcember” and beyond. The month of October was stellar for Bitcoin (BTC) and Ether (ETH), primarily because each hit new all-time highs. And even though the prices are consolidating now, traders are still wildly bullish.

The steady emergence of the Metaverse is also driving excitement within the crypto sector, as it promises to be one of the driving forces behind development in the space. The concept of a Metaverse is also impacting the “real world,” a prime example being Facebook’s recent rebrand to “Meta.”

As the market heads into the month of November and bullish expectations run hot, let’s take a look at some projects where the data hints at possible upside breakouts.

The Polkadot network is a sharding, multichain protocol designed to facilitate cross-chain transfers of any data or asset type, and the project is focused on increasing interoperability between separate networks across the blockchain ecosystem.

Data from Cointelegraph Markets Pro and TradingView shows that momentum for Polkadot’s native DOT coin has been on the rise over the past couple of months, with its price rising 95% from a low of $26.05 on Sept. 29 to a new all-time high at $51.57 on Nov. 1 as its 24-hour trading volume surged 135% to $2.93 billion. 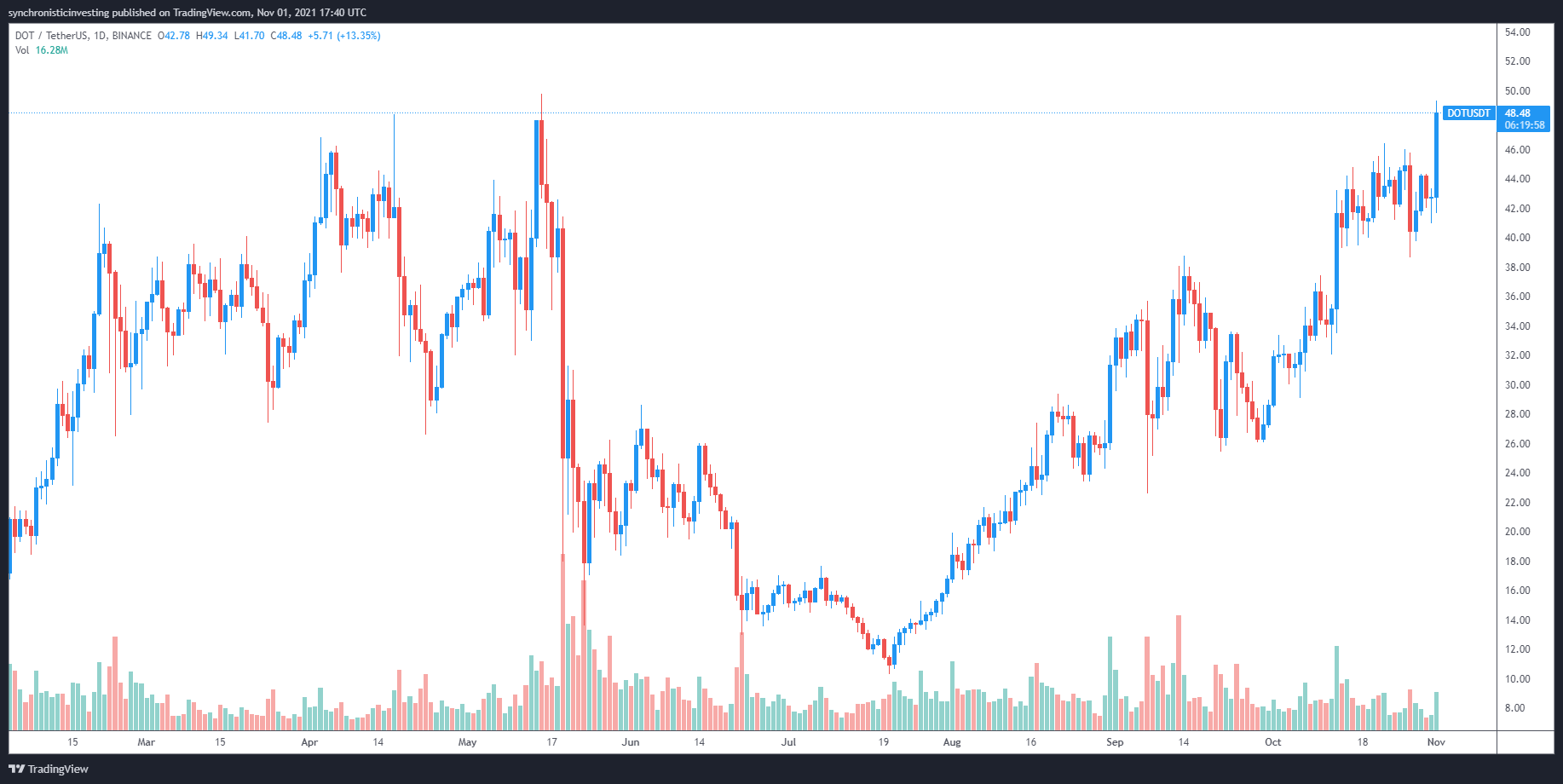 The rising strength of DOT is largely due to the upcoming launch of parachain auctions on the Polkadot protocol. It’s likely that traders are looking at the success of the parachain auctions that took place on Polkadot’s sister network, Kusama, and expecting the same to occur for Polkadot.

Polkadot’s parachain auctions have been in development throughout 2021, and the excitement surrounding their Nov. 4 launch appears to be the driving force behind DOT rallying to a new all-time high at $51.57 on Nov. 1.

VORTECS™ data from Cointelegraph Markets Pro began to detect a bullish outlook for DOT on Oct. 27, prior to the recent price rise. 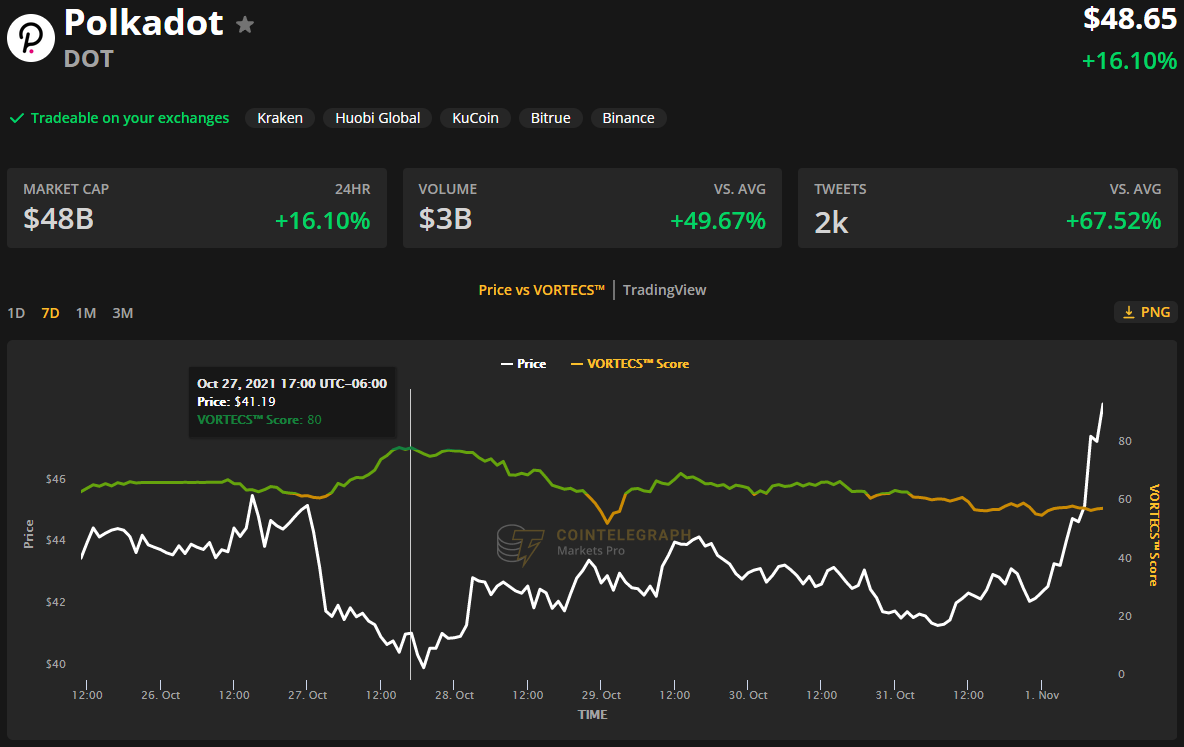 As seen in the chart above, the VORTECS™ Score for DOT began to pick up on Oct. 27 and reached a high of 80 around two hours before the price began to increase 28% over the next five days.

Chromia is a layer-one blockchain network that is Ethereum Virtual Machine-compatible and capable of enhancing layer-two performance on Ethereum and Binance Smart Chain. 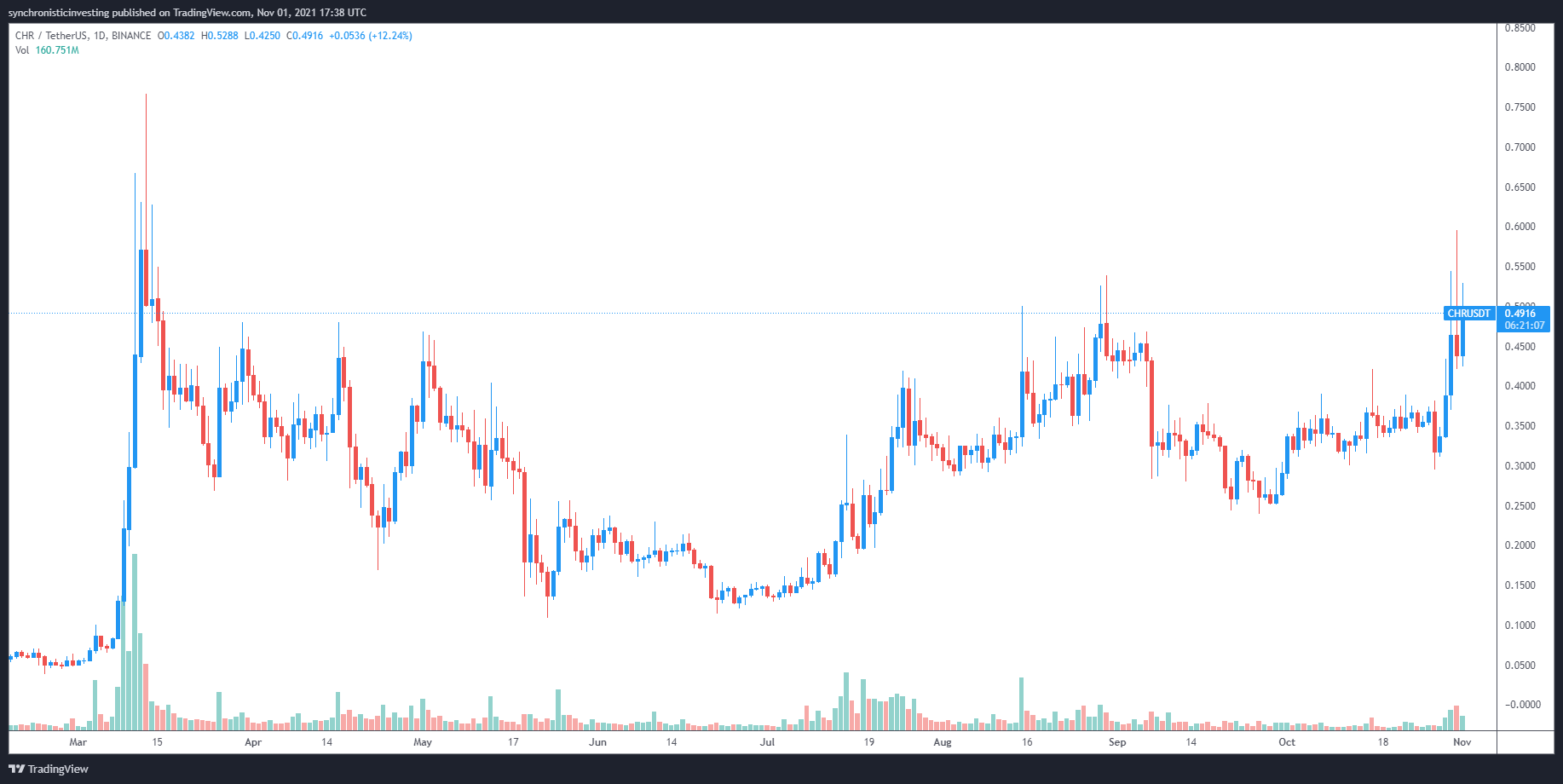 The surging price of CHR comes as the project’s gaming ecosystem has had several positive developments, including the announcement that blockchain gaming firm Revolve Games chose Chromia to build and host its play-to-earn ecosystem, as well as the listing of DAR, the token of Chromia-based Mines of Dalarnia, on Binance.

Related: ‘Uptober’ closes at record high in best month of 2021 — 5 things to watch in Bitcoin this week

Theta is a blockchain-based video streaming protocol designed to operate as a decentralized network where users are rewarded for sharing bandwidth and computing resources with others on the network.

Momentum for its eponymous THETA token has been on the rise over the past couple of months as Theta’s nonfungible token (NFT) ecosystem has expanded and is now preparing to host the launch of Katy Perry’s NFT project in December.

The token also got a boost after it was revealed that THETA stakers will be airdropped its TDROP governance token in February 2022, with the allocation each holder receives determined by the average number of THETA staked during the evaluation period.

VORTECS™ data from Cointelegraph Markets Pro began to detect a bullish outlook for THETA on Oct. 28, prior to the recent price rise. 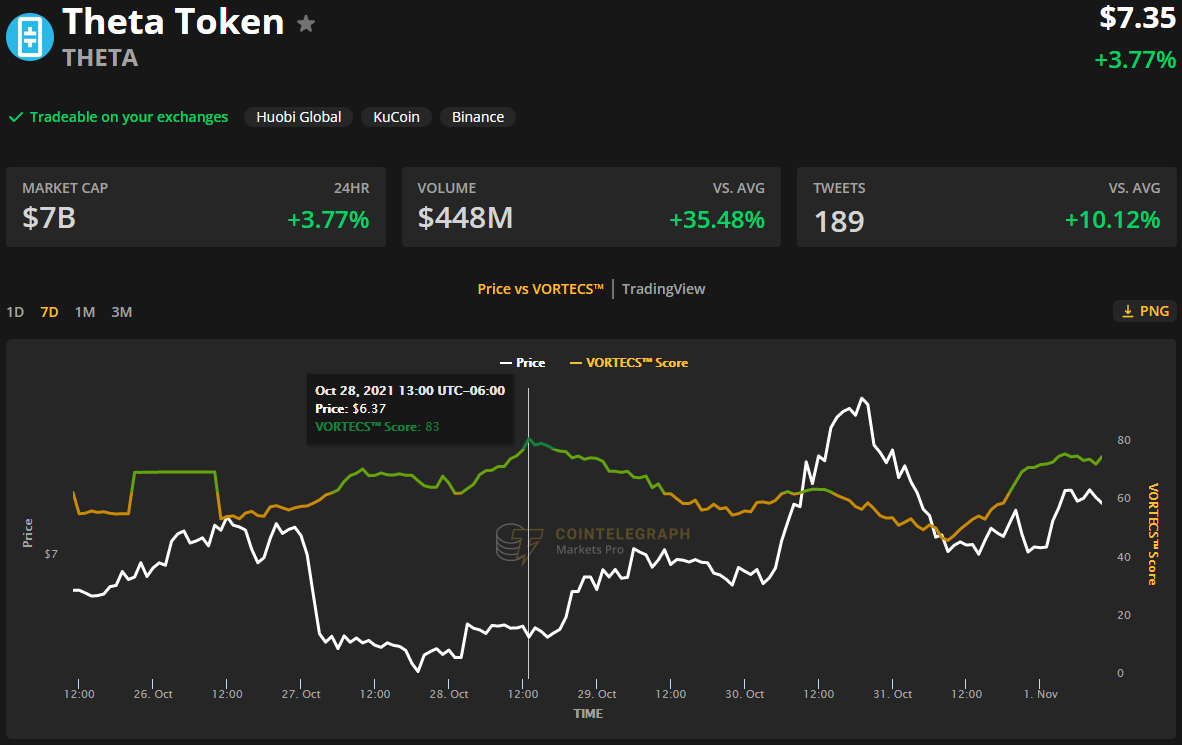 As seen in the chart above, the VORTECS™ Score for THETA climbed into the green zone on Oct. 27 and reached a high of 81 on Oct. 28 around three hours before the price began to increase 42.3% over the next three days.