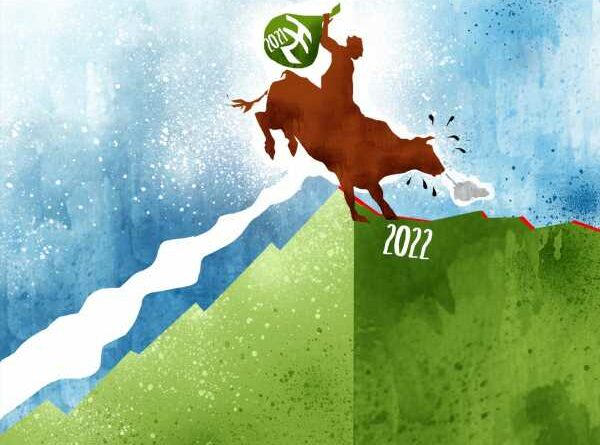 Will 2022 be a year of contrasting narratives — one filled with caution and the other with continued optimism?

The equity markets had a dream 2021. Stock prices climbed to record highs.

New trading accounts opened at a pace never seen before.

However, 2022 could be different because the buoyancy in the market — the underpinning factor — turns shaky owing to the unwinding of post-pandemic stimulus measures taken by central banks, the lingering threat of new Covid variants, and rising concern over India’s expensive valuations.

The rally in the broader market was steeper, with the Nifty Midcap 100 index climbing 58.5 per cent and the Nifty Smallcap 100 Index surging 66 per cent.

The market cap of all listed companies grew about $1 trillion (Rs 73.13 trillion) during the year to as much as $3.56 trillion.

India almost broke into the elite top-five club in terms of market cap.

In October the gap between India and the UK, which is currently in fifth place, was less than 3 per cent.

While the recent correction has eaten into the year-to-date (YTD) returns rally, India continues to be one of the best-performing equity markets globally in 2021.

Strong liquidity flows from both domestic and foreign investors provided a solid foundation for the markets through the year.

Increased retail participation was a key highlight of the year, which largely offset the $4.6 billion selloff by FPIs since October.

Domestic mutual funds pumped in Rs 76,779 crore (about $10.2 billion) into the markets this year until December 22.

Most of these flows are from domestic households.

Apart from the MF route, investors have invested directly.

According to UBS estimates, domestic household flows were $28 billion, either directly or through MFs, until September 2021.

The unique feature of this year’s IPO market was start-up IPOs.

Food-delivery company Zomato was the first off the block with its Rs 9,370 crore IPO, which received a spectacular response, paving the way for other new-age companies to tap the markets even though they lacked a profitability track record.

Nykaa, PolicyBazaar, and Paytm followed in its footsteps.

Patym’s Rs 18,300 crore offering smashed the record for the country’s biggest ever IPO.

However, the poor response to its IPO and an unprecedented 37 per cent fall in its stock price within two days of listing was probably the only blemish in what otherwise was largely a rewarding year for IPO investors.

Demat accounts saw their biggest leap in a calendar year.

The demat accounts with CDSL and NDSL as on November 30 stood at 77.2 million against 49.8 million at the end of last year, a jump of 55 per cent.

Most of these accounts were opened by first-time investors, who were attracted by the rally in the secondary market and listing-day gains of IPOs.

Until October and except for the period when the second wave hit the country, the markets saw little volatility, enriching the experience of new investors.

The ride has turned turbulent since then.

At the end of October, a slew of foreign brokerages either downgraded the Indian markets or raised concern about India’s relative valuation to other emerging markets. The jury is out whether 2022 will be a year of moderation or a negative turn.

For Indian equities, HSBC sees 2022 as a year of contrasting narratives — one filled with caution and the other with continued optimism.

The factors behind the caution are the rotation of flows from India to other Asian markets amid concern about valuation and headwinds in the form of high crude oil prices, US tapering, economic growth anxieties, and uncertainty about the spread of the new Covid variant.

Reasons for optimism are the positive macro data, prospects of a new investment cycle, continued momentum of investment in new-age companies, and successful listings and an earnings growth outlook for FY22 and FY23.

‘On the balance, we don’t see a case for any deep correction; the market has already corrected 7 per cent from its recent peak, but we don’t rule out another similar correction from current levels, before the market may turn to its own structural bullish momentum,’ Amit Sachdeva, India equity strategist, HSBC, said in a note on December 6.

The earnings of the Nifty companies have grown at a tepid pace of 4 per cent annually between FY12 and FY19.

“FY12-19 saw a broad-based slowdown, with a bank balance sheet clean-up, a real estate downturn, an oversupply in global generics, and weak telecom margins, among others. Several of these trends are now reversing,” Mishra said.

“Financials remain the key to the earnings recovery and are expected to contribute nearly half the Nifty’s earnings per share (EPS) during FY19-24 (45 per cent in FY22-24),” he added.

India’s high price-to-earnings (P/E) vis-a-vis historical averages as well as other EM peers, he predicted, will cap the upside in 2022. 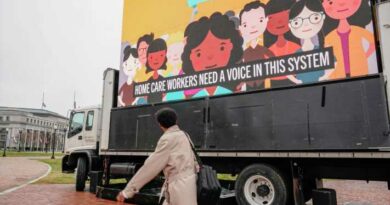 US jobless claims up to 744,000 as pandemic still forces layoffs