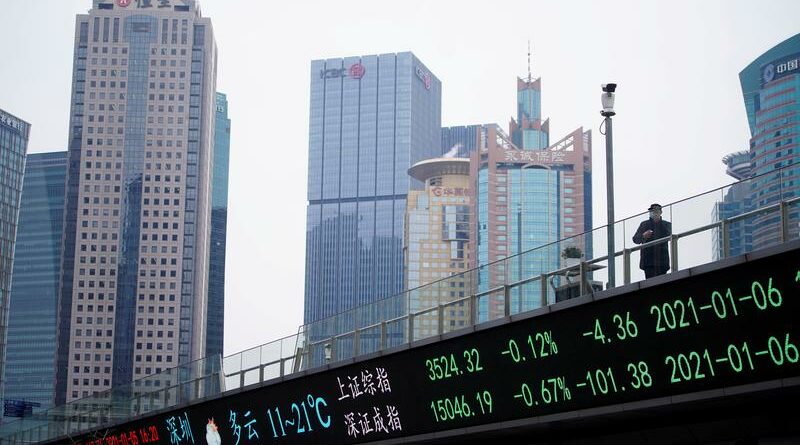 FILE PHOTO: A man stands on an overpass with an electronic board showing Shanghai and Shenzhen stock indexes, at the Lujiazui financial district in Shanghai, China January 6, 2021. REUTERS/Aly Song

Nomura and Credit Suisse are facing billions of dollars in losses and regulatory scrutiny after a U.S. investment firm, named by sources as Archegos Capital, defaulted on equity derivative bets, putting investors on edge about who else might be exposed. Shares in Nomura and Credit Suisse declined 16.3% and 13.8%, respectively, on Monday.

Michael McCarthy, chief markets strategist at CMC Markets said the worries “are very specific to a small number of hedge funds.” He said he did not expect any systemic fallout.

Still, the dollar gained on safe-haven buying, while bond prices came under pressure as the outlook for economic growth raised the specter of inflation, he added.

Benchmark 10-year yields rose to a session high of 1.728% in the U.S. after the state of New York on Monday announced people aged 30 and older could get coronavirus vaccinations starting March 30.

Crude prices inched up on a report that Russia would back broadly stable oil output when the Organization of the Petroleum Exporting Countries and allies meet this week.

Futures had earlier fallen on news that a container ship in the Suez Canal blocking traffic for nearly a week had been refloated, bringing some relief to concerns about a supply blockage.

Optimism about speedy vaccinations, the record U.S. stimulus, and robust estimates for upcoming earnings, drove the Dow and the S&P 500 to record closing highs last week.

“There’s still chatter as to whether or not, and which, American banks may be affected,” said Quincy Krosby, chief market strategist at Prudential Financial in Newark, New Jersey. “That is a question that’s lurking. But so far the market has taken (the news) in stride essentially.”

How Kawhi Leonard, Clippers look to keep his body ready for NBA rigors