Asian stock markets are mixed on Tuesday amid cautious trading and positive cues overnight from Wall Street. Investors continue to be optimistic about the opening of the global economy as vaccination drives gather pace along with falling bond yields, which is generating buying interest in high-growth companies. Asian stocks ended mixed on Monday.

The Australian stock market is modestly higher on Tuesday, extending gains from the previous session, with the benchmark S&P/ASX 200 just below the 6,800 level, following the positive cues overnight from Wall Street.

Among the major miners, Rio Tinto is gaining almost 1 percent, while BHP Group and OZ Minerals are adding more than 1 percent each. Fortescue Metals is edging down 0.1 percent.

Among the big four banks, ANZ Banking and Westpac are losing 0.5 percent, while National Australia Bank is edging down 0.2 percent. Commonwealth Bank is adding 0.3 percent.

Gold miners are mixed. Newcrest Mining is edging down 0.2 percent and Evolution Mining is flat, while Northern Star Resources is declining 0.4 percent.

Shares in Sigma Healthcare are gaining more than 4 percent after the Amcal pharmacy owner topped its 2021 earnings guidance and reported a $59 million net profit after tax for the year, compared to a $12.3 million loss in 2020.

Outdoors retailer Kathmandu has resumed paying dividends after reporting a surge in sales and profits in the first half, boosted by more than $20 million in government grants and wage subsidies. Shares are soaring more than 7 percent.

Shares in New Hope were up more than 2 percent after the coal mined announced the resumption of dividend payments, despite swinging to a $55.4 million first-half loss, compare to a profit of $69.8 million last year.

The U.S. FDA has approved the wheezo device and app of medtech firm Respiri for sale. Wheezo is a device designed to analyse breath sounds and wheezing to track and treat asthma and integrates with an app for doctors and patients to track lung health. Its shares are surging almost 9 percent.

In the currency market, the Aussie dollar is trading at $0.771 on Tuesday.

The Japanese stock market is modestly higher on Tuesday, giving up some of the early gains, with the benchmark Nikkei index above the 29,200 level, following the positive cues overnight from Wall Street. Investors continue to be optimistic about the opening of the economy as vaccination drives gather pace and after the lifting of the state of emergency in the Tokyo region.

Market heavyweight SoftBank Group is gaining almost 1 percent and Uniqlo operator Fast Retailing is edging up 0.2 percent. Among automakers, Honda is edging down 0.3 percent, while Toyota is gaining more than 1 percent.

The major exporters mostly mixed, with Canon and Sony gaining more than 2 percent each, while Mitsubishi Electric is edging up 0.2 percent. Panasonic is gaining almost 2 percent.

Among the other major gainers, Nikon Japan Exchange Group, M3, Toyobo are all gaining more than 3 percent each, while Alps Alpine, Seven & I Holdings, Screen Holdings and NSK are all rising almost 3 percent each.

Conversely, Kaeasaki Kisen Kaisha is losing almost 6 percent and ANA Holdings is down almost 4 percent. Rakuten and Mitsui OSK Lines are down more than 3 percent, while Mitsui E&S Holdings is declining nearly 3 percent.

In the currency market, the U.S. dollar is trading in the higher 108 yen-range on Tuesday.

Elsewhere in Asia, South Korea, Hong Kong, China and Malaysia are lower by 0.3 to 0.8 percent, while New Zealand, Taiwan, Indonesia and Singapore are higher by between 0.2 and 0.5 percent.

On Wall Street, stocks moved mostly higher during trading on Monday following the mixed performance seen last Friday. The major averages all moved to the upside, with the tech-heavy Nasdaq showing a particularly strong advance.

Meanwhile, the major European markets also ended the day mixed. While the French CAC 40 Index fell by 0.5 percent, the U.K.’s FTSE 100 Index and the German DAX Index both rose by 0.5 percent. 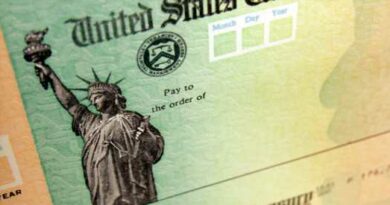 Stimulus check for less than expected? The I.R.S. says some delays are tied to spousal debts.