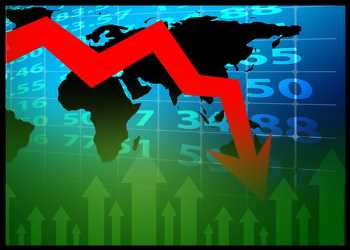 Asian stock markets are trading mixed on Friday, following the broadly negative cues overnight from Wall Street on downbeat US labor data and continued slump in U.S. treasury yields. Traders remain concerns about the outlook for the global economy amid considerable weakness in most markets due to the fresh wave of the highly infectious coronavirus variant. Asian markets ended mostly lower on Thursday.

Australian stock market is sharply lower on Friday, after gains in the previous two sessions, with the benchmark S&P/ASX 200 just falling below the 7,300 level, following the broadly negative cues overnight from Wall Street, as financial and technology stocks are taking a beating. Traders also remain concerned amid the rapid spread of highly contagious coronavirus variants is Sydney, with residents bracing for a fresh spike of COVID cases. New South Wales recorded 44 new COVID cases.

Among major miners, BHP Group and Fortescue Metals are edging down 0.4 percent each, while Rio Tinto and Mineral Resources are losing more than 1 percent each. OZ Minerals is down more than 3 percent.

Among the big four banks, National Australia Bank is losing almost 1 percent, while ANZ Banking and Westpac are down more than 1 percent each. Commonwealth Bank is declining almost 2 percent.

Gold miners are mixed. Evolution Mining and Newcrest Mining are edging up 0.3 percent each, while Resolute Mining is adding almost 2 percent. Northern Star Resources and Gold Road Resources are down almost 1 percent each.

In the currency market, the Aussie dollar is trading at $0.742 on Friday.

The Japanese stock market is sharply lower on Friday, extending the significant losses of the previous two sessions, with the benchmark Nikkei 225 losing nearly 700 points to be just above the 27,400 level, following the broadly negative cues overnight from Wall Street. Traders are spooked after reports of plans to reintroduce a state of emergency to contain a resurgence of a fresh wave of COVID-19 infections.

Japan has already declared a new state of emergency for Tokyo until August 22 to combat a recent surge in infections ahead of the Olympic Games in the city in two weeks. The Tokyo metropolitan government reported 920 new infections on Wednesday, the highest figure since mid-May.

Japan’s minister for the Tokyo Olympic and Paralympic Games also announced that no spectators will be allowed at Olympic venues in Tokyo and the three surrounding prefectures of Saitama, Chiba and Kanagawa.

Market heavyweight SoftBank Group is losing almost 3 percent and Uniqlo operator Fast Retailing is down more than 1 percent. Among automakers, Honda is losing more than 2 percent and Toyota is down almost 2 percent.

Among major exporters, Mitsubishi Electric is losing almost 3 percent, while Canon and Sony are down almost 1 percent each. Panasonic is declining more than 2 percent.

Conversely, Eisai and Hitachi Zosen are gaining more than 1 percent each.

In the currency market, the U.S. dollar is trading in the higher 109 yen-range on Friday.

Elsewhere in Asia, South Korea is plunging 1.7 percent, Taiwan is down 1.1 percent, New Zealand is declining 0.9 percent and China is lower by 0.4 percent. Indonesia, Malaysia, Hong Kong and South Korea are all higher by between 0.1 and 0.6 percent each.

On Wall Street, stocks climbed well off their worst levels after an early sell-off but still ended Thursday’s trading firmly in negative territory. With the drop on the day, the Nasdaq and the S&P 500 pulled back off yesterday’s record closing highs.

The major European markets showed even more substantial moves to the downside on the day. While the French CAC 40 Index plunged by 2 percent, the German DAX Index and the U.K.’s FTSE 100 Index both tumbled by 1.7 percent.

Crude oil futures settled higher Thursday after data showed a bigger than expected decline in crude inventories in the U.S. last week. West Texas Intermediate Crude oil futures for August ended up by $0.74 or 1 percent at $72.94 a barrel.

Johnny Nash Dies: ‘I Can See Clearly Now’ Singer-Songwriter Was 80