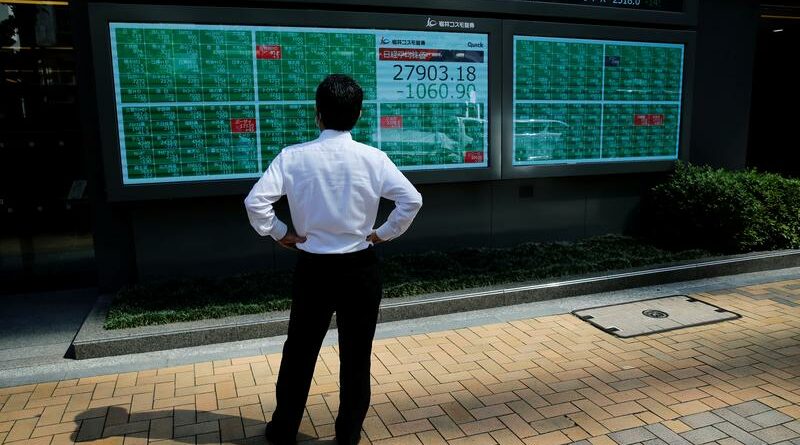 FILE PHOTO: A man watches an electric board showing Nikkei index outside a brokerage at a business district in Tokyo, Japan, June 21, 2021. REUTERS/Kim Kyung-Hoon

Trading in shares of debt-laden China Evergrande was suspended pending an announcement about a major transaction. That comes a few days after the distressed developer missed a key interest payment on its offshore debt obligation for the second time.

Chinese media reported on Monday Evergrande will sell a half-stake in its property management unit for more than $5 billion, however, that news did little to sooth sentiment.

“The biggest problem is not a default by Evergrande but the environment that has led to its downfall. Authorities are regulating housing loans and lending to property firms. Markets are looking for a next Evergrande already,” said Kazutaka Kubo, senior economist at Okasan Securities.

“There is rising risk Evergrande’s woes will spread to the entire Chinese property sector.”

Hong Kong’s Hang Seng index dropped as much as 2.7% to edge near its one-year low touched last month while Japan’s Nikkei stood 1.1% lower at one-month lows.

Chinese mainland markets will be closed until Thursday for the National Day holiday while South Korean markets were also shut on Monday.

European shares are expected to rise slightly in a catch-up to a late Wall Street rally on Friday, with Euro Stoxx futures and Britain’s FTSE futures trading 0.3-0.4% higher.

Investor sentiment got a lift after Merck & Co said an experimental oral antiviral treatment could halve the chances of dying or being hospitalised for those most at risk of contracting severe COVID-19.

Investors fear global inflation could persist for longer than expected, given a continued rise in commodity prices and ongoing supply disruptions in many parts of the world, despite Federal Reserve Chair Jerome Powell’s insistence that high inflation is transitory.

The core U.S. PCE price index, the Federal Reserve’s preferred inflation measure for its flexible 2% target, increased 3.6% in August from a year earlier, its biggest rise in three decades and matching July’s gain.

“Although Powell has stuck to his script that inflation will be transitory, he is also recently starting to hedge his comments too, leading investors to suspect he, too, is worried about inflation,” said Norihiro Fujito, chief investment strategist at Mitsubishi UFJ Morgan Stanley Securities.

Biden administration officials say China has not met its Phase 1 trade deal obligations and that they intend to hold it to its commitments. 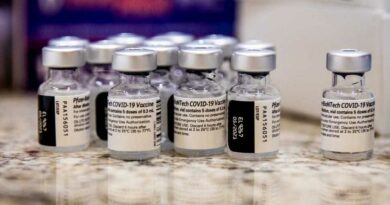