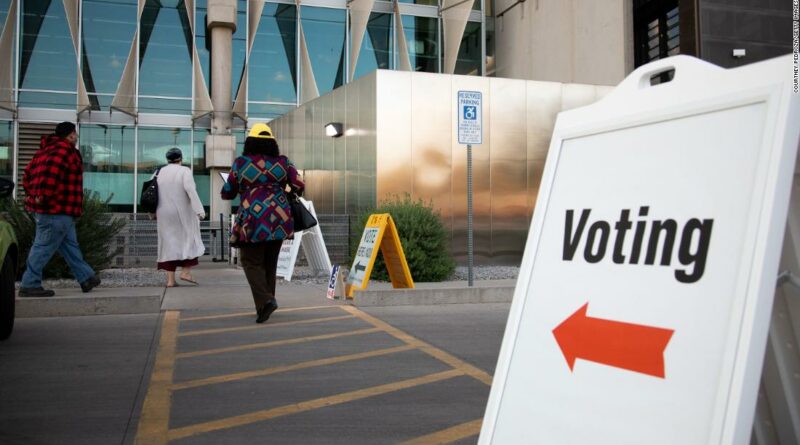 This story originally ran on March 16, 2021, and has been updated with additional developments.

(CNN)Republicans at the state level have moved swiftly to either roll back some easy access to voting or put new obstacles in the way of voters following losses in the 2020 presidential and US Senate elections.

More than 250 bills to curb or complicate access to polls had been introduced in 43 state legislatures as of February 19, according to the Brennan Center for Justice, which is tracking the bills — and bills have since been introduced in at least two more states, North Carolina and Wisconsin, according to CNN reporting.
Here’s what to know about the battle over voting rights happening right now.

What are the key states to watch?

Florida, Arizona and Georgia were all battleground states in 2020 and host US Senate races in 2022. Republican legislative majorities and GOP governors are moving to make it more difficult to vote in these states, with Georgia becoming the first of them to enact new restrictions this year.

What exactly are the curbs on voting rights and access we’re talking about?

They vary from state to state.
In Georgia, the GOP-led legislature sped a bill to Republican Gov. Brian Kemp on March 25. It imposes new voter identification requirements for absentee ballots, empowers state officials to take over local elections boards, limits the use of ballot drop boxes and makes it a crime to approach voters in line to give them food and water.
In Arizona, one bill would repeal the state’s permanent early voting list, by which voters can automatically be sent an absentee ballot. The state, where Republicans lost both Senate seats in recent years, but retain the state government, has the most suggested changes. The list is long, indeed — see it here.
In Florida, Republican Gov. Ron DeSantis is pushing a proposal to cut down on the mailing of mail-in ballots to voters and cut access to ballot drop boxes.
Many states are considering changing from signature verification to require voters to include a copy of their driver’s license or other paperwork with a mail-in ballot.
Others are considering proposals to remove a voter’s registration if they don’t vote in four consecutive years.
In Texas, there are more than a dozen suggested bills and Republican Gov. Greg Abbott said they’re needed because Harris County, recently a Democratic stronghold, made changes at the local level to increase turnout during the pandemic.
“We must pass laws to prevent election officials from jeopardizing the election process,” Abbott said, somehow arguing that more people voting jeopardizes the process.

Could these changes alter the outcome of future elections, if passed?

Absolutely. In 2020, at the national level, President Joe Biden got many millions more votes than former President Donald Trump, and he decisively won the Electoral College. But he won multiple states by slim margins. Changes that marginally affect turnout in Georgia, Arizona plus any one other state could be decisive in 2024.

Why are Republicans pushing changes now, instead of before the 2020 election?

Why not just have everyone vote at the same time and in the same way?

Election Day is the first Tuesday after the first Monday in November. (It’s been that way for a long time.) But the US is a country of 50 states and more than 330 million people of varying degrees of education and engagement. There’s something to be said for flexibility. Many people work odd hours. They work multiple jobs. And the Constitution puts states in charge of their elections, although Congress can regulate them.
The difficulty is making sure everyone has the same access to the polls while also maintaining the necessary amount of security. A complication is that when there are normal voting hours, it’s often people in cramped urban areas that end up waiting for hours. Early voting and voting by mail are alternatives to remove that barrier.

Can’t everyone over 18 in the US vote? How can states restrict access?

Yes! It took a long time to get from white landowners voting in the first presidential election to the 24th Amendment, enacted in 1964, which says:
“The right of citizens of the United States to vote in any primary or other election for President or Vice President for electors for President or Vice President, or for Senator or Representative in Congress, shall not be denied or abridged by the United States or any State by reason of failure to pay any poll tax or other tax.”
That did away with poll taxes and, paired with the Voting Rights Act, ended many of the Jim Crow-era tricks that kept many Black Americans from voting.

But not everyone over the age of 18 can vote — noncitizens and felons, in most places, although there are efforts to re-enfranchise felons. Notably, they can vote in Florida after voters there approved a ballot initiative in 2018.
States have the power to govern their own elections, but Congress has the power to place rules on them. And the courts often get involved.
Nearly every state requires some kind of voter registration and many require an ID to vote and there are many different versions of absentee voting and the hours during which people in different states can vote early or on Election Day.

What’s the history of rules about who can vote in US elections?

Voter registration is relatively unique to the US and has a long history of racism. It started in New England in the 1800s, was a key element of Jim Crow in the South, and then saw a huge uptick in the early 1900s as states tried to make it more difficult for immigrants and Jewish and Black Americans from voting.

What do other countries do?

Rather than put up roadblocks to voting, some countries, such as Australia, require it. People who don’t vote face a small fine.
Most countries in the world either automatically register voters or require voters to register, according to a Pew analysis.

The government makes people pay taxes, why can’t it just register them to vote?

Is there an effort in Congress to change things at the national level?

Yes. House Democrats have passed a sweeping bill that includes a number of voting reforms, including automatic national voter registration. Currently, 18 states and Washington, DC, have automatic registration. Expanding that requirement nationwide could enfranchise 50 million Americans, according to the Brennan Center.
The bill would do a lot more, including putting an end to partisan gerrymandering, by which parties draw congressional lines to protect their incumbents, mandating a two-week early voting period and more.
But it would require a supermajority — 60 votes — to overcome a promised GOP filibuster in the Senate. Democrats have suggested changing Senate rules specifically for this bill, but it’s not clear all Democrats would support the rule change.

Clearly, Democrats are trying to make it easier for people to vote and Republicans are generally trying to make it harder. That tells you a lot about the political calculus here. But it’s also true that Republicans did not lose every Senate race or any state legislatures in 2020 when turnout was through the roof.
A 538 analysis suggests expanding access does not necessarily help one party or the other. But most of that comes from before Trump spewed election fraud fantasies and questioned vote by mail for the entire 2020 election, turning Republicans off to the practice — though he himself requested an absentee ballot in Florida again this year.