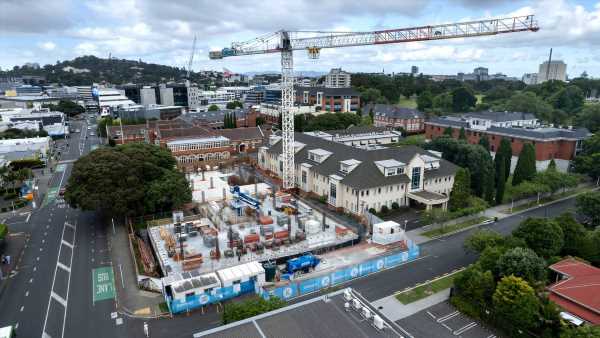 Kalmar Construction has the first level up of a $300 million-$400m Auckland retirement apartment project where price records were set of just under $4m per unit last year.

A tower crane is up on the site of The Foundation Parnell, going up on the corner of Parnell Rd and Maunsell Rd, developed by Graham Wilkinson’s privately-owned Generus Living Group.

Retirement apartments are pre-selling for the highest price in New Zealand there.

The new building is within a few metres of the national headquarters of Blind Low Vision NZ, previously called the Blind Foundation.

That national headquarters is due to be demolished later this year.

Wilkinson said licences sold were the highest price for any retirement village or apartment homes in New Zealand.

The development is a joint venture between his Generus and Blind Low Vision NZ, which owns historic buildings on the site with some surplus land and has been there for many decades.

Wilkinson said that towards the end of last year, deposits had been taken on 80 per cent of apartments in the first of three blocks.

On the sales of just under $4m per apartments, Generus will keep a 30 per cent deferred management fee. So people who will pay $3m-$4m for an apartment will forgo around $1m on each licence purchase under that arrangement once they leave.

Ryman takes only a 20 per cent deferred management fee but the higher 30 per cent is charged by most other retirement village operators.

Fletcher Residential is planning to undercut the market by keeping only 15 per cent – half what Generus will charge in Parnell, for example.

Last month, Fletcher Building released further details about Vivid Living, aiming to undercut the sector by keeping only about half the capital people pay to buy into villages compared with other operators.

But to make the offer more financially attractive, facilities such as hospitals and extensive recreational amenities won’t be built, so the entry will be a pared-back version of competitors’ offerings.

Steve Evans, Fletcher Residential and Development chief executive, said Vivid’s first villages would both be in Auckland: one near Manukau, the other on the North Shore.

Retirement village properties are not sold outright by most owner/operators. Only licences to occupy are sold, so buyers don’t get a property title but a contract to live in the place as long as the terms of that are not breached.

Wilkinson said The Foundation was modelled on London’s Chelsea Barracks on the site of a historic former military base in Belgravia, one of the world’s wealthiest districts. Places there go for millions of pounds each, he said.

Kalmar is due to be finished in Parnell by 2023.

Generus has also restored the heritage building Ranfurly House at Mt Eden, making it a community centre with a library, meeting areas, dining and movie theatre for the Ranfurly Village, 539 Mt Albert Rd.

In both cases, Wilkinson established joint ventures with charities – war veterans at Ranfurly and Blind and Low-vision in Parnell.

He has also joined with iwi at Pacific Coast Village, Mt Maunganui. That is a joint venture between Generus and Mangatawa Papamoa Blocks, a Māori incorporation.

The Generus business is unusual in New Zealand because it is owned by Wilkinson, therefore a private business.

Most of the other six big retirement businesses are owned by shareholders and listed on the NZX.

What’s the best way to ask for a job promotion? Ask HR 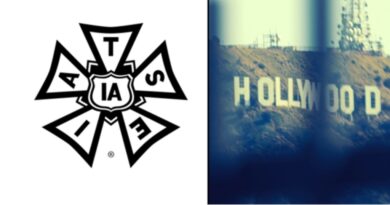 Back From The Brink: How Crippling IATSE Strike Was Averted (For Now)