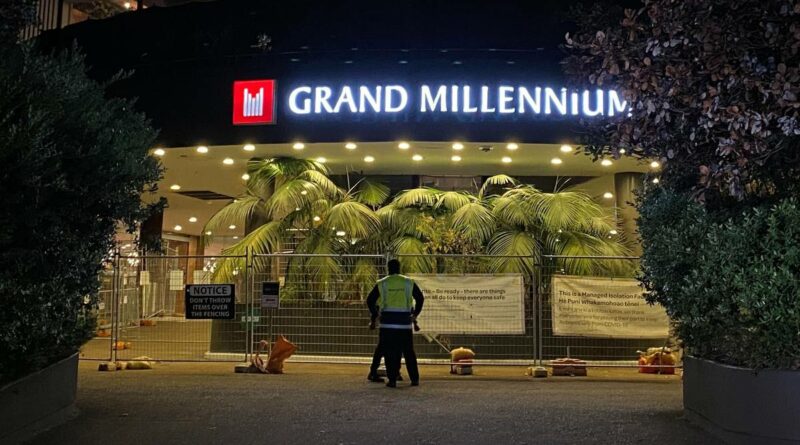 During the Covid pandemic, the public has heard a lot about the precautionary principle. The Prime Minister referred to it when announcing every lockdown.

Most recently, Auckland was placed at alert level 3 in February because of the Government’s precautionary approach. The uncertainty created by three community cases in Papatoetoe was enough to lock up the country’s largest city for a third time.

The fears that prompted Auckland’s move to alert level 3 proved unfounded. Yet few questioned the Government’s approach. The public has become conditioned to the precautionary principle’s safety-first procedures.

The public has heard less about the closely related and broader cautionary principle. Judging by last week’s revelations about “case B”, a Grand Millennium MIQ security guard infected with Covid-19 who had evaded testing for Covid-19 for more than six months, nor have health officials or the Minister of Health.

Most readers subconsciously follow the cautionary principle in their everyday lives. Modern wiring and electric lighting mean the risk of a house catching fire nowadays is small. Yet, because the consequences of a fire are so severe, homeowners and communities adopt a series of fail-safes. Smoke alarms and household extinguishers, on-call emergency services, building codes, and fire insurance all guard against the risk of everything going up in smoke.

Regulatory regimes also routinely adopt the cautionary approach. Food safety standards policed by the Ministry for Primary Industries make sure food is safe to consume. Aircraft safety regulations policed by the Civil Aviation Authority make sure air travel is safe and reliable. To make sure roads are as safe as they can be, the police enforce the road code. And the New Zealand Transport Authority ensures vehicles are regularly warranted for fitness.

Each of these regimes has detailed checks and balances. The goal is to reduce the risk of human error, human oversight, or even willful non-compliance. The approach is justified under the cautionary principle. The risk of mistakes is judged too important to leave to the vagaries of individual conduct.

New Zealand’s biggest risk is not an outbreak of salmonella or a car with faulty brakes. It is another Covid-incursion – especially with new, more virulent coronavirus strains now circulating around the world.

Covid can only enter the country through our border. And all Kiwis know the cost of a Covid-incursion is high. The price is measured not simply in the loss of personal freedom from lockdowns, but in lives and livelihoods.

Yet, according to the Prime Minister, the Grand Millennium security guard was able to evade the border security system simply by “lying.” If that is so, the Ministry of Health’s regulatory regime has unforgivable flaws. A system that can be undone by a border worker not telling the truth is no system at all.

When the costs of failure are so calamitous, the cautionary principle required the Ministry to have designed, implemented, and enforced the most fail-safe system possible to ensure that workers at risk of coming in to contact with Covid-19 are regularly tested for the virus.

If the Ministry did not have the necessary resources, Covid-19 Response Minister

Chris Hipkins should have ensured they were made available.

And if the ministry was unable to implement a robust system in the nine months since the minister promised that all border workers would be routinely tested, organisations supplying border workers should at least be subjected to regular process audits and spot checks. After all, it is another well-known principle of regulatory design that when detection of breaches is difficult, enforcement action must be strict.

On Television New Zealand’s Q&A on Sunday, Hipkins acknowledged that the Government “could have moved earlier when it came to making the border worker testing register mandatory.” But he suggested this conclusion was easy to reach with the benefit of “hindsight.”

Yet it did not require hindsight to work out that mandatory systems were needed to reduce the risk of the biggest danger the country faces.

No New Zealander should find these comments satisfactory.

If the register is so ineffective that it cannot even do the job that NZTA routinely does with Warrants of Fitness (by telling owners when their vehicles are due their next check-up), then the minister needs to ensure that other steps are taken to make sure workers are being tested. Spot checks by enforcement officers – followed by hefty fines for non-compliance – are an obvious approach.

To excuse the ministry’s failings, Hipkins attempted to draw an analogy between Covid-19 and a speeding driver. He said, “If somebody drives their car too fast and causes an accident that injures, or even kills someone; to say that that’s the Government’s fault because we didn’t have a speed camera on every street would be somewhat of a high threshold to set.”

Hipkins is right to infer that frontline companies and their workers need to take personal responsibility. But the Government has a critical role to play too. Unlike New Zealand’s extensive road network, the country’s border risks arise at a comparatively small number of locations. All those locations can be policed.

More importantly, unlike the speeding driver, the careless or wilfully disobedient border worker risks not just harming themselves and others on the road but harming all of us.

In response to these revelations, director-general of health Dr Ashley Bloomfield was reported as stating “he would have hoped” the workers had been vaccinated by now. Yet none of this should be left to “hope”.

The ministry has had the luxury of following other nations when designing its vaccination programme. Countries like the United States, the United Kingdom, Singapore and Israel started vaccinating their citizens in December last year. This gave New Zealand two months of lead time.

In February, the Ministry of Health announced it expected to have vaccinated all “frontline staff” within two or three weeks. A chart released a few weeks later by the Ministry set that date as the end of March. The Herald’s investigations have since revealed the chart was nothing more than a graphic designer imagining what a robust vaccination programme might achieve. Just like New Zealand’s Covid testing regime, the chart had a semblance of rigour but in reality was just thin air.

In response to “chartgate,” late last week the Ministry of Health released target vaccination data. The targets are ambitious. After a slow start in the first half of the year, the Ministry expects more than half a million doses to be administered weekly during September and October. The targets suggest 90 per cent of New Zealand’s adult population will be vaccinated in the second half of the year.

Yet few countries in the world have managed to vaccinate 10 per cent of their populations in a week – and none of them have populations as large as New Zealand’s. More troublingly, the targets were released without detailed plans explaining how they are to be met. Based on the evidence to date, the targets may be little more concrete than the projections from the Ministry’s graphic designer.

When the risk of omission is catastrophic, the cautionary principle requires more from the Ministry of Health than hope and imaginary plans. So do all New Zealanders.

• Roger Partridge is chairman of The New Zealand Initiative.

Oil falls for fifth day as coronavirus spreads outside of China