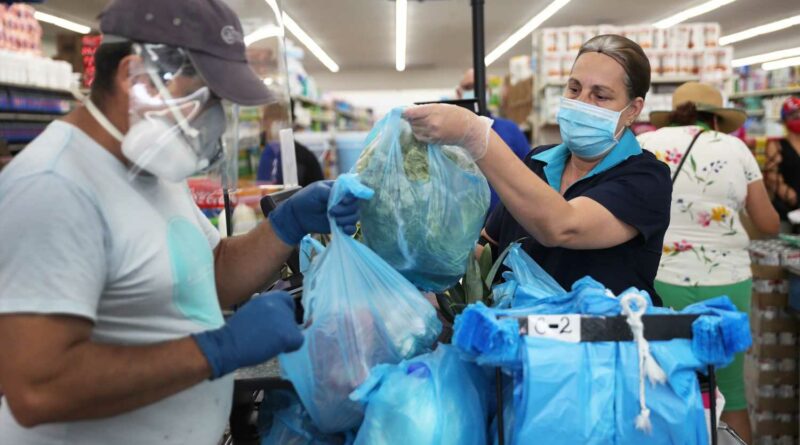 At the start of 2020, Giant Eagle kicked off a company-wide mission to phase out all single-use plastic bags. The Pittsburgh-based grocery chain stopped offering thin, throwaway bags at the checkout area in roughly 40 stores. It posted signs in parking lots reminding shoppers to bring reusable bags and offered discounts for those who did.

The efforts cut down on 20 million single-use plastic bags, the company said, which can litter parks, get stuck in trees or wind up in landfills.

"We fully recognized we took a step back — as did other retailers," said Dan Donovan, the company's senior director of corporate communications and a member of the team advancing the grocer's environmental efforts. He said safety took priority as employees and customers worried about Covid and scientists sought to better understand how the virus spread.

Similar patterns have played out across the country. The pandemic not only disrupted the daily rhythm of work, school and life. It complicated efforts for retailers to reduce use of non-recyclable plastics, from grocery bags to plastic forks. It also inspired behavior changes that fueled greater consumption of packaging as more people shopped online, bought disposable protective gear like masks and gloves and gravitated toward bagged or wrapped produce and other grocery items at the store.

One year later, single-use plastics remain a ubiquitous part of retail — even as major players like Walmart, Target, Kroger and CVS Health pledge to transition to more sustainable alternatives.

"For many of us, the pandemic has changed our relationship with single-use plastic in uncomfortable ways," said John Hocevar, oceans campaign director for Greenpeace USA, an environmental nonprofit organization. "The new types of useless plastic packaging piling up in our homes and filling our trash cans are leading many people — including policymakers and corporate executives — to think more about reuse."

Plastic is a major driver of climate change worldwide. Though companies that produce and sell plastic tout recycling as a solution, less than 10% of American plastic waste is recycled. Research also shows the U.S. generates more plastic waste than any other country in the world.

Hard-fought plastic bag bans were rolled back or suspended early in the health crisis. Maine and Oregon postponed statewide bans. California Gov. Gavin Newsom suspended a ban in his state that had been in effect since 2016. And in New York, Covid-19 cases spiked soon after the state's ban of single-use plastic bags went into effect on March 1 — delaying enforcement for about seven months and slowing efforts to change deep-seated habits.

Consulting firm Wood Mackenzie estimated that U.S. demand for flexible packaging, most of which is single-use plastic, increased by 4% to 5% compared with the year prior following the panic buying of the early Covid lockdowns. The firm expects demand to grow by 4.5% annually over the next five years.

"These companies should be putting plans in motion now on what a world beyond single-use plastics will look like," Hocevar said. "The pandemic cannot be an excuse that worsens another public health crisis."

'Get back on the roadmap'

Over the past year, public health officials have debunked fears that Covid-19 is spreading through contaminated surfaces. The Centers for Disease Control and Prevention said that the virus is transmitted primarily from person to person. More than 125 health experts have issued guidance on how reusables can be used safely during the pandemic.

New York began enforcing the plastic bag ban in the fall. Some retailers, like Giant Eagle, say they want to resume sustainability efforts. Others, including Amazon-owned Whole Foods and Texas grocer H-E-B, are bringing back food bars where customers serve themselves instead of picking from pre-packaged plastic containers.

Donovan said Giant Eagle wants to "get back on the roadmap that we had projected to be on more than a year ago." By early summer, if not sooner, the grocer will remove single-use plastic bags from some stores again and plans to expand that to all 470 locations over time in order to fulfill a commitment to phase them out entirely by 2025.

But first, Donovan said Giant Eagle must win over shoppers — a potentially tougher sell after a year that may have ingrained germ-consciousness. When the company surveyed customers in the fall, 60% said they did not feel safe bringing reusable bags or seeing other customers bring them in.

"There's the science of what we're learning and then there's the feelings and the emotions and the fears of people, regardless of the science in some instances," said Donovan, who added the company would potentially incentivize customers with discounts on groceries or fuel at its gas stations.

When it reopens cafes and hot bars, it's also considering how to eliminate other plastics like straws or utensils. And it is working with manufacturers on more sustainable packaging for private label products.

It wants to make a fast-growing part of its business more eco-friendly, too. Online orders quadrupled during the height of the pandemic and have leveled off, but at double the pre-pandemic rate, he said. It plans to offer shoppers an option to get all paper bags — instead of plastic — when they retrieve groceries by curbside pickup or have them delivered.

About a dozen retailers including Dick's Sporting Goods, Dollar General and Kroger have signed on to an initiative called Beyond the Bag that's run by the innovation arm of an investment firm, Closed Loop Partners. Walmart, Target and CVS Health are founding members and contributed $5 million each.

Kate Daly, managing director at the Center for the Circular Economy at Closed Loop, noted many of those retailers wrote checks and joined the consortium during the global crisis.

"It was a clear indication that none of our corporate partners are putting a pause on sustainability," she said.

However, environmental groups have argued that corporate initiatives to reduce and recycle plastic waste have been insufficient, especially as plastic manufacturers increase production. Environmental advocates are pushing for legislative measures including the passage of the Break Free From Plastic Pollution Act.

"Big brands have been making promises on recycled content for decades, yet the pollution crisis worsens daily," Hocevar said. "It is time to end the greenwashing and take real steps to end our reliance on polluting single-use plastics."

Daly acknowledged that the pandemic has had its setbacks, but said it has also opened people's eyes to the need for sustainability. As people spent more time at home, they saw their trash pile up with individual food wrappers or discarded bubble wrap from online deliveries, she said. Companies saw the vulnerability of global supply chains, and heard calls for action from activist shareholders, politicians and consumers.

"We need to take the burden off of customers and not expect them to be the innovators and entrepreneurs, but rather to offer them a diversity of options that are cost-efficient, inclusive and accessible and also the most sustainable," she said. "That's what customers are expecting and increasingly demanding."

Last month, Beyond the Bag announced nine winners of a challenge to come up with alternatives to single-use bags — from compostable bags made with seaweed to a kiosk that allows customers to borrow and return reusable bags.

Daly said shoppers may see retailers testing some of those approaches in stores as early as this year.

Even outside of grocery stores, entrepreneurs see the desire for sustainability as a business opportunity that can generate profits, along with goodwill and a healthier planet.

Nate Faust sold his previous company, Jet.com, to Walmart for $3.3 billion. He co-founded the start-up with Marc Lore, who recently left the big-box retailer after leading its e-commerce strategy. Now, Faust has started a company aimed at reducing packaging.

Faust said the idea was born out of his own frustration, after seeing the amount of discarded boxes in his New Jersey neighborhood.

His new start-up, Olive, consolidates apparel purchases across brands and drops them at customers' doors in a reusable tote. It also aims to cut back on fuel and pollution by delivering orders once a week rather than numerous times per day or week. Customers can return items in the same tote.

"More and more consumers do care about the environment," he said. "It's not about making a trade. That's actually how they live their lives. As younger generations became a larger portion of consumer spending, that will become the feature in and of itself."