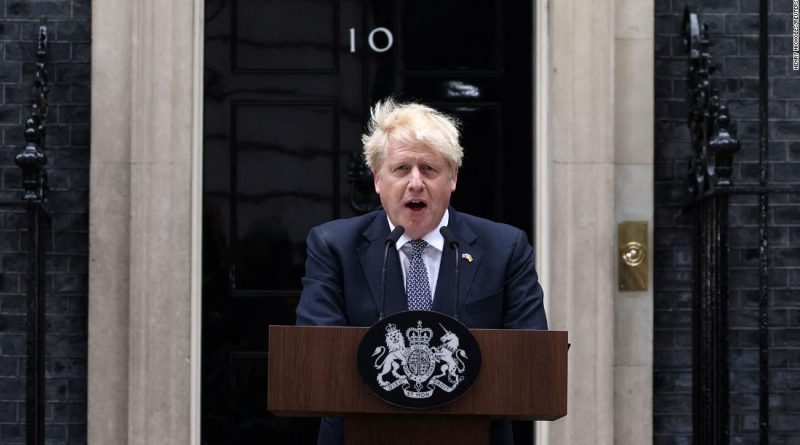 New York (CNN Business)Editor’s Note: This story is part of CNN Business’ Nightcap newsletter. To get it in your inbox, sign up for free, here.

Well, at least Boris Johnson’s tenure as UK prime minister lasted longer than Neville Chamberlain’s. So he’s got that going for him, we guess.

Johnson resigned Thursday after an unending series of ethics scandals finally set his party against him. (And the latest one is particularly gross. We’ll just drop a link here.)

Although Johnson’s tenure has been defined by scandal, one can argue (and we are) that it was Britain’s lousy economy that ultimately did him in.

The United Kingdom has the highest inflation among G7 nations — 9.1% in May and forecast to go to 11% later this year, my colleague Mark Thompson writes. The rise in food and fuel prices has created the UK’s worst cost-of-living crisis in decades: Disposable incomes are on track for the second steepest decline since records began in 1964, according to the Bank of England. And typical wages in the UK haven’t grown at all since the 2008 financial crisis, the Resolution Foundation said on on Monday.
So no wonder the public isn’t exactly bullish on Boris.

But why is the UK economy so much worse off than its peers? Let’s start with Brexit, Johnson’s “signature” achievement. Leaving the European Union:

Against that backdrop, the global economic pressures every country faces — a messed-up supply chain caused by the pandemic and surging commodity prices due to Russia’s invasion of Ukraine — have hurt the United Kingdom much more than its G7 allies.
A recession looms for whoever is unlucky enough to take over for Johnson, as the world’s fifth-biggest economy ground to a halt in February, started shrinking in March and got even worse in April. As inflation soars, British consumers are buying less, and anti-poverty campaigners say UK households have been forced to choose between “heating and eating.” Every major sector of the economy is going in reverse, according to the Office for National Statistics.
Oh, and it’s going to get worse: The UK economic outlook has “deteriorated materially,” the Bank of England said. And the Organisation for Economic Co-operation and Development forecast last month that the UK economy won’t grow at all next year — the worst expectations for any G7 economy next year.
So, yeah, the scandals weren’t great for Johnson. But political leaders all over the globe are facing immense pressure because of inflation. It turns out people really don’t like it when they can’t afford to buy the stuff they want. Johnson’s scandals were the last straw for a prime minister already on paper-thin ice.
Otherwise, Conservatives may have stuck by Johnson through thick and (mostly) thin — just as it did through the five-week prorogation of Parliament, corruption allegations, a lobbying scandal, and most of Partygate.

NUMBER OF THE DAY: 9

That’s the number of children we now know Elon Musk to have — up from the seven the world knew about before Business Insider reported on Wednesday that the world’s richest man welcomed twins last year with an executive at one of his companies, Neuralink.
Musk tweeted on May 24 saying, “USA birth rate has been below min sustainable levels for ~50 years” and pinned it to the top of his more than 100 million-follower Twitter account.

GameStop’s shares are about to get a lot cheaper.
The company’s board Wednesday approved a 4-for-1 stock split, effective July 22. For current GameStop shareholders, the overall value of their investment will stay the same, but they will own four times as many shares when all is said and done.
Depending on where GameStop’s stock is trading in a couple weeks, that should bring the stock’s price down to $30ish — about where it was before meme-stock mania sent shares surging as high as $347 in January 2021.
Shares of the meme stock darling soared following the news Thursday.
GameStop (GME), like other meme stocks, is having a rough 2022. The stock plunged earlier this year, although it has battled back a bit recently, my colleague Jordan Valinsky notes. The stock is down about 14% this year, mirroring the broader market sell off.
Hard to believe, but even at a third of its all-time high, GameStop may still be a bit pricey for individual investors. Making the stock cheaper could boost demand and create more liquidity for the company.

Although deep-pocketed institutional investors are typically unfazed by high share prices, individual investors might be turned off by sky-high price tags. The growth of zero-fee trading apps, including Robinhood, E-Trade and others, have boosted demand for meme stocks like GameStop and AMC — and helped made stock splits more attractive in recent years.
Enjoying Nightcap? Sign up and you’ll get all of this, plus some other funny stuff we liked on the internet, in your inbox every night. (OK, most nights — we believe in a four-day week around here.)
Source: Read Full Article 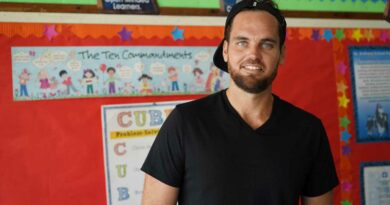 How this 38-year-old teacher earning $47,000 a year in Hawaii spends his money