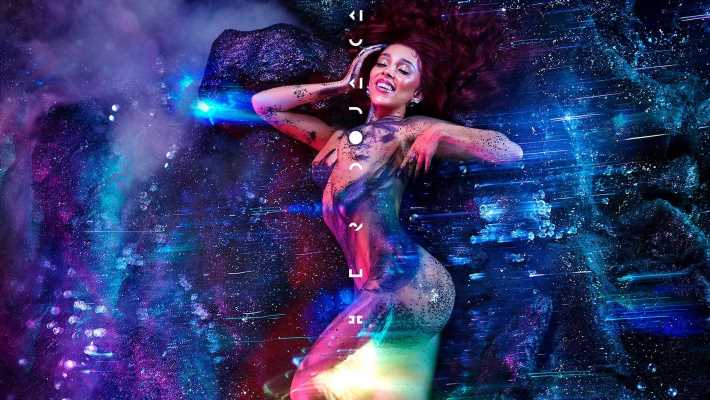 Doja Cat’s world is one where pop, rap, trap and R&B frolic together.

Within her cauldron of sterile beats and gliding synthesizers are lyrics about female dynamism, sexual fantasies and getting paid. Call it empowerment with a wink.

On her third album, “Planet Her,” the 25-year-old singer-rapper born Amala Dlamini has indeed created her own little universe, evidenced by the multi-hued art provided by subversive photographer David LaChapelle, the cast of marquee guests (Ariana Grande, Young Thug and The Weeknd among them), a vague sci-fi theme and her apparent unbridled confidence.

About half of that world is worth inhabiting.

Doja Cat’s self-assurance is earned and her follow-up to 2019’s breakthrough album “Hot Pink” is much anticipated. A trio of Grammy nominations and her intoxicating No. 1 disco bauble “Say So” – aka, the best song Gwen Stefani never wrote – introduced her to an audience beyond TikTok and purveyors of internet memes (“Mooo!”).

But rather than continue to follow that obvious musical path, Doja Cat instead ping-pongs from Afrobeat (the opening track, “Woman”) to reggaeton (“Naked”) to flute-infused trap (“Options,” with J.I.D.) to hazy pop (“Love to Dream”).

It’s an ambitious collection of 14 songs, with scattered results.

“Get Into It (Yuh)” is as much a schoolyard chant as a song, but Doja Cat’s nimble flow is an admirable standout (she also throws some love to Nicki Minaj at song’s end).

Her two highest profile collaborations – with Grande and The Weeknd – are memorable not for the name recognition of her playmates, but how well they balance Doja Cat’s unique, if not technically adept voice.

Grande is in full pillow-y princess mode as she complements Doja Cat on the airy “I Don’t Do Drugs,” a mid-tempo pop song studded with electronic touches. The Weeknd, meanwhile, dives into the head nodding “You Right,” which he co-wrote, with a patented sexy verse, leaving his mark as he urges Doja Cat to move on and into his bed (“I know your history, met him before your peak/ He’s so connected to that woman that you used to be”).

The last chunk of the album, including “Been Like This” and “Imagine,” blur into indistinguishable beats. But see it through, because the closer, “Kiss Me More” featuring SZA is the jewel of “Planet Her.”

Consider it a raunchier cousin to “Say So” with a sweet melody and a chorus that integrates elements of Olivia Newton-John’s “Physical.” Even though it was released as the lead single in April, “Kiss Me More” is both pulsing and summer breezy enough to keep it in circulation – and the prime reason to spend time on Doja Cat’s “Planet.”