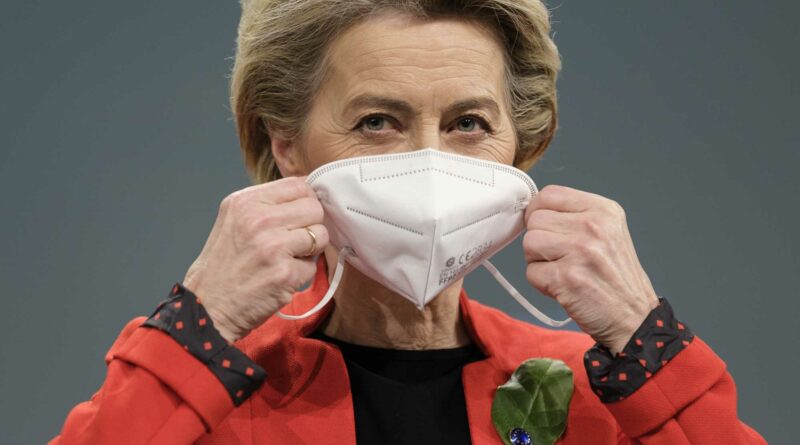 The European Union has had a bumpy Covid-19 vaccine rollout. The campaign has prompted complaints that regulators were too slow to approve the shots and led to a simmering tussle with AstraZeneca as the pharmaceutical giant repeatedly slashed its delivery commitments.

More recently, several countries briefly halted their use of the Oxford-AstraZeneca vaccine amid safety concerns, a move that baffled health experts and raised questions about future uptake.

The World Health Organization expressed concern earlier this week that the region's ongoing coronavirus crisis now appears "more worrying" than it has for several months. The warning comes as many countries introduce new measures in an attempt to curb a third wave of infections.

The health agency also described Europe's vaccination campaign as "unacceptably slow" and said it was crucial to speed up the rollout because new infections are currently increasing in every age group apart from those aged 80 years or older.

It's a messy picture, further complicated by the unique nature of European politics.

"There have been various problems with the system, and it is a complex system, so I think it's key not to point the finger to one pointed failure but recognize that it's very complex," Linda Bauld, professor of public health at the University of Edinburgh, told CNBC.

The European Commission, the executive arm of the EU, has been in charge of negotiating contracts with the pharmaceutical firms on behalf of the 27 member states. The institution is also responsible for overseeing the exports of the shots produced in the bloc.

However, health policy matters are a competence of the member states, which means the 27 capitals organize the inoculations in their own countries and can ultimately decide to buy Covid shots outside the deals struck by the commission, for example.

This juxtaposition between national and EU institutions has often hindered the reputation of the bloc in the wider vaccination efforts.

"There is issues to do with both (national and EU institutions). There clearly are politics in it and we have all heard about that in the media, but there are also issues to do with the decision-making structures, the commissions' views and the priorities of member states," Bauld told CNBC.

This was highlighted recently when 13 EU countries decided to halt the use of the Oxford-AstraZeneca shot while possible side effects were investigated.

At the time, the European Medicines Agency – the drugs regulator for the entire 27-member region — recommended that countries continue to use the vaccine even while it was reviewing data of blood clots in some vaccinated people. But some member states preferred to be cautious and used their sovereign power to stop the use of this vaccine while the EMA completed its review. The drug regulator's safety committee concluded in a preliminary review that the benefits of the vaccine continue to outweigh the risk of side effects.

It has also been the case that heads of state have used the institutions in Brussels to complain about the hiccups in the process. Earlier in March, Austrian Chancellor Sebastian Kurz said there was "secrecy" in the decision to distribute the vaccines at the commission's steering board.

The group, which is chaired by the commission, has representatives from all the member states, including Austria.

"Why do they come up with this now knowing that Austria is a member of the steering board, like the 26 other member states, and has been informed of the previous allocations like the others?" an EU official from another member state, who did not want to be named due to the sensitivity of the issue, asked during a CNBC interview in March.

The distribution of the vaccines is carried out on a pro-rata basis, depending on the size of the countries' population. But some EU nations were particularly keen to have more of the AstraZeneca shot, since it is cheaper and easier to store than the Pfizer-BioNTech vaccine.

"If a member state decides not to take up its pro rata allocation, the doses are redistributed among the other interested member states," the commission said in a statement in March.

The distribution of vaccines became an issue as a result of AstraZeneca's repeated cuts to supply deliveries.

While the EU was expecting to receive 90 million doses of the shot by the end of the first quarter, the pharmaceutical giant said it could only deliver 40 million doses in that timeframe. This was later revised down to 30 million doses.

AstraZeneca has blamed low yields in European plants for the lower deliveries. Additionally, the drugmaker has said it could only aim to deliver 70 million doses between April and June, when the EU was expecting 180 million in the same period.

"We also know that AstraZeneca has unfortunately under-produced and under-delivered. And this painfully, of course, reduced the speed of the vaccination campaign," von der Leyen said at a press conference in March.

To solve this issue, the commission proposed stricter rules on exports of shots produced in the bloc.

Since the end of January, the 27 countries can stop shipments of Covid vaccines when a company is not complying with delivery targets with the EU. This is how the Italian government stopped a shipment of AstraZeneca shots from going to Australia in March. Between the end of January and late March, the commission received 315 requests for vaccine exports, but only this one was refused.

But because EU officials are concerned about further delivery delays, the commission decided to toughen up the export regulations from late March onward.

The commission will not only be checking whether the pharma companies are delivering on schedule, but also whether the recipient country has any bans or restrictions of Covid vaccines produced there and whether this nation also has a better epidemiological situation than the EU.

"It is quite concerning at the political level the whole discussion about exports restrictions, controls or even bans," Dimitri Eynikel, coordinator at Medecins sans Frontieres, told CNBC. He added that this could lead to further obstructions, divisions and delays in vaccine distributions.

Ultimately the supply chain is international and if one nation were to stop sending raw materials to the EU, for example, then that could undermine the production of the shots within the bloc.

The EU's move to have stricter oversight on where vaccines go sparked criticisms of vaccine nationalism.

Data shared by the International Monetary Fund has shown that China, India and the EU are among the biggest exporters of Covid shots, while the U.S. and the U.K. have exported none so far.

Hopes for the second quarter

Despite several issues so far, the EU is confident that the next three months will prove to be a turning point in the vaccine program.

In total, the commission is expecting 360 million doses of Covid shots between April and June, meaning it is well placed to achieve its target of vaccinating 70% of the adult population before the end of summer.

"Despite the fact that things could have gone faster, granted, but we have had a great success. The alternative of not having procured vaccines together would be that we would be competing between European member states and possibly some of us would have not have the vaccine even at this stage," Chris Fearne, Malta's health minister, told CNBC's "Squawk Box Europe" on Tuesday.

Harvey Weinstein Claims He Was Pioneer In Making Films For And By Women; Says “My Work Has Been Forgotten”

Ford says will continue to sell diesel models in India

Some LSE investors call on Hong Kong exchange to up bid by 20%, add cash