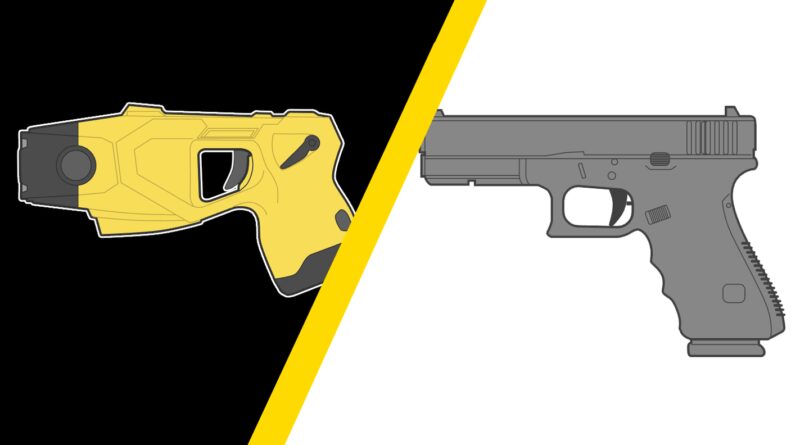 When Brooklyn Center, Minnesota, police officer Kim Potter allegedly mistook her service weapon for a stun gun and fatally shot an unarmed Black motorist Sunday, it was at least the 16th such “weapons confusion” incident in the United States since 2001.

And the victim, Daunte Wright, was at least the fourth person to have died as a result, according to data compiled by the website FatalEncounters.org and University of Colorado professor Paul Taylor, who tracks such cases.

These types of incidents are rare, experts say, although no government agency tracks the use of Taser-like devices nationwide so it’s impossible to say with certainty how many times it has occurred.

What is certain is that these scenarios are avoidable. When they do happen, it’s typically the result of inadequate or lapsed officer training, according to at least a half dozen weapons and law-enforcement experts interviewed by the USA TODAY Network.

“Police agencies only tend to train up to the manufacturer recommendation,” said Brian Higgins, a former police chief in Bergen County, New Jersey, and recognized expert in use of force and police training issues. “Training is key. You can’t train them once.”

Most Taser confusion incidents are attributed to officers holstering a stun gun on the same side as their service weapon, according to David Klinger, a former police officer in Los Angeles and Redmond, Washington, and an expert in deadly force.

It’s the reason why law enforcement agencies started changing their weapon policies requiring a weak-arm draw for Taser use, after the deadly 2009 shooting of Oscar Grant by a Bay Area Rapid Transit officer in Oakland, California.

Potter fatally shot Wright, 20, after he broke free from an attempt by another officer to handcuff him during a traffic stop. A struggle ensued, and Wright jumped back into the driver’s seat, video footage shows.

With Wright in the driver’s seat, Potter, a 26-year veteran of the police force, threatened to use her Taser against him. In the video, Potter is heard shouting, “Taser!” at least three times before shooting Wright in the chest, then saying, “Oh (expletive), I just shot him.”

20-year-old Daunte Wright was shot by a single bullet after Minnesota police say an officer accidentally pulled out a gun instead of taser. (Photo: City of Brooklyn Center via Associated Press)

The car drove away, traveling several blocks before hitting another vehicle.

Wright’s death, which set off protests and unrest Sunday and Monday nights, was ruled a homicide by the Hennepin County medical examiner. Potter, 48, resigned from the police force on Tuesday.

The Minnesota Bureau of Criminal Apprehension is investigating the incident. A spokesman said it was too soon to say whether Potter would face charges.

Before Sunday’s incident, the most recent cases occurred in 2019, when there were two. Both victims survived.

Brian Rilling, 40, of Bucks County, Pennsylvania, was shot and seriously injured during a scuffle in a holding cell in the New Hope Borough Police Department in March 2019.

The officer who shot him, Cpl. Matt Zimmerman, a 33-year veteran of the force, was trained and certified only once –11 years earlier – on how to use the Taser, despite a 2007 department policy that required annual retraining.

Zimmerman, 65, also was carrying his Taser on the same side as his service weapon, another policy violation.

Later it was learned that all but two New Hope officers had outdated Taser certifications.

Zimmerman retired from the department days before the Bucks County district attorney found the shooting was not justified but excused the officer, saying it was an honest mistake.

This video was taken in the New Hope Police Department holding cell on March 3, 2019. It shows the accidental shooting of Brian Riling, of Pipersville, by former police officer Matt Zimmerman.

Earlier this year, Rilling filed a civil suit against New Hope and Zimmerman in U.S. District Court in Philadelphia. The suit claimed police used “unreasonably deadly force” against Rilling and alleged lack of training and supervision of police.

Two months after the Pennsylvania accident, another one occurred.

Ashley Hall was shot in May 2019 by Ladue, Missouri, police Officer Julia Crews, during an incident in a Schnucks grocery store parking lot. According to media reports, the 33-year-old Hall told Crews she had been assaulted. Police also said Hall was suspected of shoplifting a grocery cart full of food and hitting a worker with a bag of stolen items.

Crews, 37, tried to handcuff Hall, while stating she was not under arrest. Hall fled.

Crews ordered Hall to stop and warned her she would use her Taser. But instead she fired her service weapon and shot Hall in the back.

Crews was charged with second-degree assault in the case. The case is pending, although the city of Ladue in October agreed to pay $2 million to settle a federal lawsuit filed by Hall.

The Brooklyn Center policy also specifically states that “mere flight from a pursuing officer without other known circumstances or factors is not good cause for the use of the Taser device to apprehend an individual.”

The USA TODAY Network has requested from the Brooklyn Center Police Department a copy of Potter’s Taser training history. It was not immediately provided.

Brooklyn Center needs to determine if this was a failure of training or an issue specific to Potter, such as inability to handle high-stress situations or going too long without training with a Taser, said Higgins, the use of force expert.

Protesters raise their hands in front of the Brooklyn Police Department a day after Daunte Wright was killed by police in Brooklyn Center, Minn. on April 12, 2021. (Photo: Harrison Hill, USA TODAY)

“This is not a rookie mistake. You and I see it. Her body camera picks it up. How does she not see it?” Higgins said. “That needs to be evaluated.”

“Is it an officer issue, and if so, how was it not identified before?” he added.

It could be both an officer issue and a training issue.

Stun guns, such as Tasers, are lighter than a service weapon and often have highly visible yellow colors. They are designed not to resemble a gun in order to avoid such confusion, said Higgins, who is also a professor in the department of Security, Fire and Emergency Management at John Jay School of Criminal Justice in New York City.

But making stun guns look and feel  different from service weapons won’t solve these mistakes, said Von Kleim, a spokesman for Force Science Institute in Minnesota and use of force expert.

“If color and weight are intended to mitigate these errors, humans aren’t going to be perceiving those factors. Those are not what we should be relying on,” he added. “The people who design the Taser need to have a serious conversation whether a design change is worth the additional mitigation of this error.”

Slip errors – where the officer has the right intention but the wrong execution – most likely occur when a police officer deviates from automatic processes like drawing a firearm, Kleim said.

“When (Potter) was focused on the threat, intended to draw the Taser, but her body reverted to the more frequent practice of drawing the firearm,” Kleim said.

Slip errors are hard to prevent and they occur in many industries, and they are highly resistant to correction. The most frequent way to prevent them is a complete redesign to generate a significantly different motor response, Kleim said.

In virtually every Taser confusion incident there is some training failure found, Higgins said, adding that most of it is cursory, substandard and bare minimum.

Axon Enterprises, which manufactures Taser, the most well known brand of conducted energy devices, recommends – but does not mandate – annual recertification for Taser users. Axon does not keep records on training for end users.

Tasers work by shooting two barbs connected to thin wires that deliver 50,000 volts of electricity into the body, temporarily paralyzing the nervous system and muscles.

People gather at the start of the curfew to protest the death of Daunte Wright who was shot and killed by a police officer in Brooklyn Center, Minnesota on April 12, 2021. A suburb of Minneapolis was under curfew early April 12, 2021 after US police fatally shot a young Black man, sparking protests not far from where a former police officer was on trial for the murder of George Floyd.Hundreds of people gathered outside the police station in Brooklyn Center, northwest of Minneapolis, with police later firing teargas and flash bangs to disperse the crowd, according to an AFP vide ojournalist. (Photo: KEREM YUCEL, AFP via Getty Images)

Despite being considered non-lethal weapons, the tools are dangerous and sometimes deadly. Yet, Taser recertification training courses typically last no more than four hours and involve reviewing guidelines, then firing one or two training cartridges at a stationary target, Higgins said.

“Training should go beyond that,” he said.

This is especially critical for officers whose initial police academy training didn’t include Taser use.

That’s the kind of training police get with their service weapons, experts said. As part of police academy training, they are drilled to draw their side arm without consciously thinking about it until it becomes an automatic response.

Under the stress of an unfolding threat situation, an officer may unconsciously rely on muscle memory and reach for the firearm because it’s the movement they have rehearsed the most often, experts said.

The best way to change that learned behavior is including stress-inducing scenarios as part of Taser training so officers are forced to make split-second decisions the same way they do with firearms recertification, Meyer said.

“You almost have to untrain that muscle memory,” Higgins added.