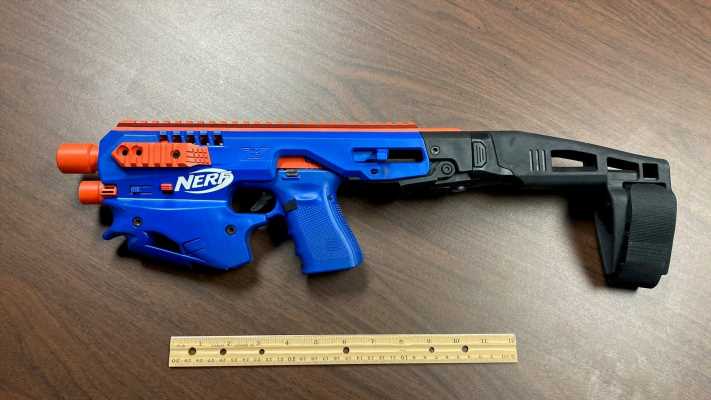 A drug raid in North Carolina turned up narcotics, cash and plenty of guns – including a semiautomatic pistol well-disguised as a toy Nerf gun.

The Glock model 19 pistol with a 50-round drum magazine was painted blue and orange and had a Nerf logo similar to the toys made by Hasbro that fire foam darts, discs or balls.

The Catawba County Sheriff’s office said in a Facebook post that while guns are routinely seized during searches involving narcotics, “firearms of this type, while not illegal to possess, are concerning to law enforcement.”

Damien Alonzo Burch, 35, was charged with felonious possession of cocaine and mushrooms and misdemeanor possession of marijuana and released on bail pending resolution of the case.

Child left in tears after mall Santa said no to Nerf guns is flooded with the toys, including from the NRA

Actual toy guns have been an issue with police in the past. In January, police in Lakewood, Colorado, held a woman and her boyfriend at gunpoint after a dispatcher received false information that someone in the couple’s car had threatened a Walmart employee with a gun.

It turned out that a child in the car had been playing with a toy gun.

“I hate to say it, but I actually played the scenario in my head of shots going off,” Celeste Lopez, who has four boys, told KDVR-TV.  “I could feel it, like, my heart started racing. I could feel the adrenaline.”