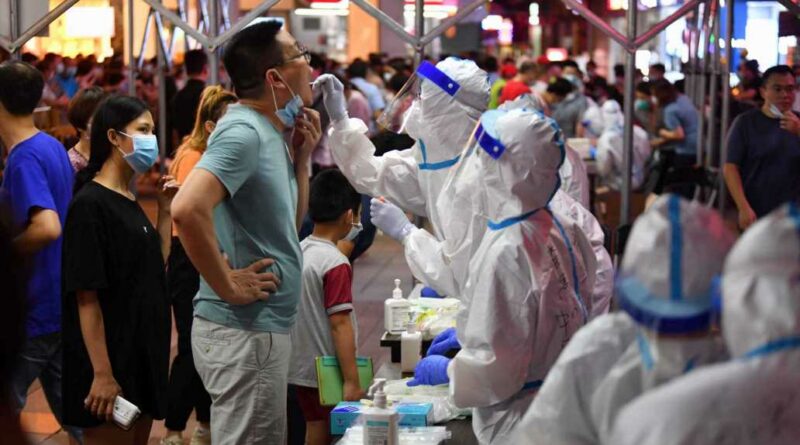 GUANGZHOU, China — Police in Guangzhou detained people who have fallen foul of Covid prevention laws, as the southern Chinese city deals with an outbreak of the Delta variant first identified in India.

Authorities in the city of over 15 million people have moved swiftly to introduce mass testing and lockdown local areas since detecting the first local case of the Delta variant in China on May 21 in Guangzhou.

Since then, Guangzhou had a total of 115 cases as of midnight on June 8 — the most out of the entire Guangdong province which also includes the technology hub of Shenzhen. It began with a 75-year-old woman who visited a restaurant.

The latest flare-up is cause for concern as the Delta variant is known to be highly transmissible.

After the coronavirus first emerged in Wuhan last year, China broadly managed to control it. Life in the world's second-largest economy has been relatively normal for over a year, but a broad spread of the Delta variant could threaten that. So far it has been contained in Guangdong.

But cases continue to show up, mainly in the hotspot of Liwan in the west of Guangzhou and Haizhu and Nansha in the south. Authorities are fighting to contain its spread.

Parts of Liwan have been locked down, which means residents cannot enter or leave a certain zone. Shops have been shut. Across various areas of the city, restaurants have been forced to stop dine-in services and instead move to outdoor dining or takeout only.

Authorities have also conducted mass testing of residents over the last two weeks. Over 27 million people have been tested since May 26.

But as the government worries about the spread of the Delta variant, authorities have urged citizens to do their part or face punishment under law.

Over the past 24 hours, official Guangzhou government channels on popular messaging app WeChat, have been posting articles reminding people of the laws.

Chen Bin, the deputy director of the Guangzhou Municipal Health Commission, said on Tuesday that if people do not cooperate with the city's attempts to to stamp out the virus, they could face "legal liability" including fines and detention.

Violations of laws include not wearing masks in public places, not co-operating when asked to take a coronavirus test, not complying when a person has been asked to isolate and quarantine and spreading false information.

Guangzhou police said they have investigated six cases related to violations of regulations on epidemic prevention and control.

One of the cases involved a man staying at a hotel in a district of Guangzhou. He was asked to take a coronavirus test but refused to do so. After an hour of persuasion, police managed to get the man out of his room, but he still refused to be tested, according to the Guangzhou Health Commission. He allegedly then stabbed a police officer with a fork. The man was detained.

Another case involved a man who concealed that he had contact with people with confirmed coronavirus cases. He has also been detained by police.