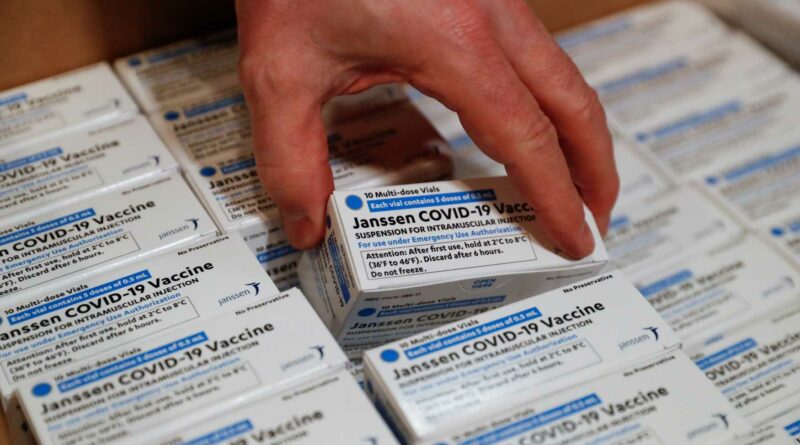 Johnson & Johnson on Tuesday reported $100 million in first-quarter sales of its Covid-19 vaccine that's on hold in the U.S. while federal health regulators investigate a rare blood-clotting issue.

Here's how J&J did compared with what Wall Street expected, according to average estimates compiled by Refinitiv:

The New Jersey-based company's share price was down slightly in premarket trading following the report.

J&J's pharmaceutical business, which developed the single-shot Covid vaccine, generated $12.19 billion in revenue, a 9.6% year-over-year increase. The results were driven by sales of the company's multiple myeloma drug Darzalex and Stelara, a treatment for Crohn's disease.

The company's consumer unit, which makes products such as Neutrogena face wash and Listerine, generated $3.5 billion in revenue, down 2.3% from a year earlier. J&J executives told investors the decline is due to an "unfavorable comparison" to last year when people were stockpiling on over-the counter- products due to the virus.

Its medical device unit generated $6.57 billion, a 7.9% increase, as the pandemic recovery improves. The unit was hit hard last year as the pandemic forced hospitals to postpone elective surgeries and Americans stayed home.

J&J Chief Financial Officer Joseph Wolk told CNBC on Tuesday that its three business segments are "healthier" than they were entering the pandemic last year.

J&J's Covid vaccine has been put on pause in the United States after six women developed a rare but potentially life-threatening blood clotting disorder. One woman died and another was in critical condition.

The six women developed the condition known as cerebral venous sinus thrombosis within about two weeks of receiving the shot, U.S. health officials said. CVST is a rare form of stroke that happens when a blood clot forms in the brain's venous sinuses. It can eventually leak blood into the brain tissues and cause a hemorrhage.

White House chief medical advisor Dr. Anthony Fauci said last week the pause would give U.S. health regulators the time they need to thoroughly investigate the cases and "find some common denominators among the women who were involved."

Vamil Divan, an analyst at Mizuho Securities, said in a note to investors Tuesday that he expects safety-related concerns of the J&J shot will drive further demand for Pfizer's mRNA-based vaccine.

During an earnings call with investors, J&J executives said the company is working to "restore the confidence in the vaccine" after the reports of rare blood clots spooked some patients.

"We hope by making people aware [of the risk,] as well as putting clear diagnostic and therapeutic guidelines in place, that we can restore the confidence in our vaccine," said J&J chief scientific officer Dr. Paul Stoffels.

Wolk told CNBC that the company is working with U.S. regulators to ensure they have all the information they need to make their decision on the use of the J&J vaccine. He said he expects the U.S. to make a decision as early as the end of this week. A key Centers for Disease Control and Prevention panel is scheduled to meet Friday to make a recommendation on the vaccine.

"We remain very confident and we're hopeful the benefit-risk profile will play out," he told CNBC's "Squawk Box," adding that the company still expects to deliver 100 million doses in the first half of this year should the U.S. investigation on the blood-clot cases "go well."