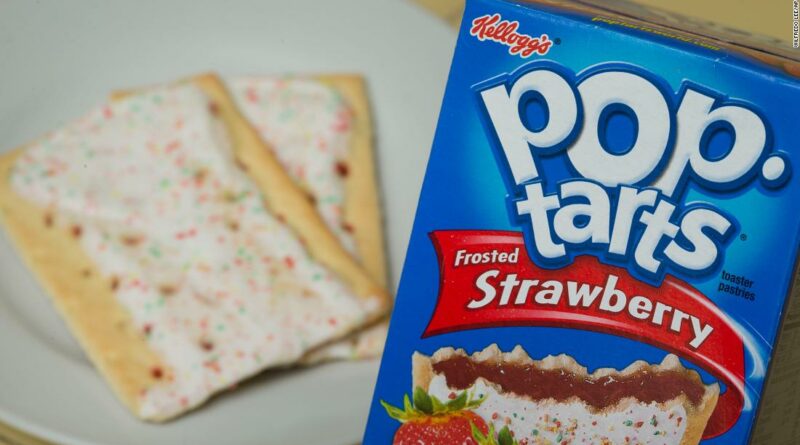 New York (CNN Business)No one would mistake Kellogg’s Pop-Tarts for a bowl of fruit — they are an indulgent treat, loaded with sugar and processed ingredients. But a new lawsuit claims Pop-Tarts are masquerading as a health food.

A class action lawsuit, filed by Illinois resident Anita Harris in August, alleges the brand’s marketing is “misleading because they give people the impression the fruit filling contains a greater relative and absolute amount of strawberries than it does.” The lawsuit also focuses on the health benefits that come from strawberries, citing a WebMD description stating that strawberries “protect your heart, increase HDL (good) cholesterol, lower your blood pressure and guard against cancer.”
The lawsuit seeks at least $5 million. Harris also alleges the product’s name, “Frosted Strawberry Toaster Pastries,” is “false, misleading, and deceptive” because the Pop-Tart filling contains a “relatively significant amount of non-strawberry fruit ingredients” including pears and apples. The plantiff said she wanted more than a “strawberry taste,” which she nevertheless “failed to receive, due to the relatively greater amount of pears and apples,” according to the lawsuit.

The lawsuit indicates that Kellogg’s “only promotes the product’s strawberry content in its labeling and marketing, such as on its website.”

Kellogg did not respond to CNN Business’ request for comment.

According to the product’s ingredients list, Pop-Tarts contain “2% or less of wheat starch, salt, dried strawberries, dried pears and dried apples” and 2% or less of other ingredients including citric acid, gelatin, modified wheat starch, yellow corn flour, caramel color palm oil, xanthan gum, cornstarch, turmeric extract color, soy lecithin, red 40, yellow 6, blue 1 and added color.
Harris’ complaint contrasts Kellogg’s (K) Pop-Tart marketing unfavorably with other “frosted strawberry” toaster pastries from companies including Walmart’s (WMT) Great Value brand and Dollar Tree (DLTR)‘s Clover Value brand. Both of those companies, the lawsuit states, use the phrase “Naturally & Artificially Flavored” on the box to tip off customers that the product has less strawberry ingredients than consumers might expect. Kellogg’s, however, does not put that language on its Pop-Tart boxes.
It’s silly, sure. But does Harris have a legal argument? Perhaps, said Edgar Dworsky, consumer lawyer and founder and editor of Consumer World.
“Food product labeling cases are hot now,” Dworsky said. “Various lawsuits recently have claimed that there is no real tuna in Subway tuna fish, that Honey Bunches of Oats is almost devoid of honey, and that Morning Star Farms Veggie Hot Dogs have almost no vegetables. How they ultimately turn out is a toss of a coin.”

The plaintiff cited the Illinois Consumer Fraud and Deceptive Business Practices Act, stating that Kellogg’s “false and deceptive representations and omissions” are likely to influence consumer purchasing decisions. “Consumers seeing defendant’s Product, which exclusively promotes strawberries, and the more ‘restrained’ or truthful labeling of competitors, will purchase defendant’s Product,” the lawsuit states.
“Some judges find that sellers have misrepresented their products, while others say if the consumer took the time to read the ingredients statement, they would know exactly what they were buying,” Dworsky said. “I don’t have a great sense that the Pop Tarts case will succeed, however.”
Source: Read Full Article

U.S. has not ruled out imposing tariffs on imported autos: Commerce chief Ross

Can you spell these 12 challenging words? Scripps National Spelling Bee finalists could

Should Analysts Be More Bullish After Tesla Deliveries?