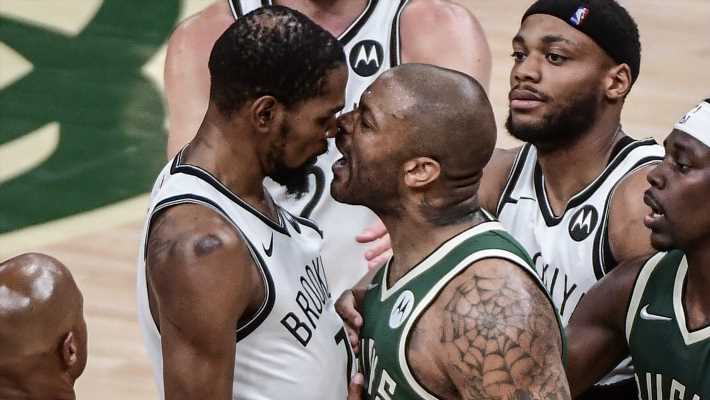 The NBA reprimanded the Brooklyn Nets security guard who aggressively knocked the Milwaukee Bucks' P.J. Tucker out of the way during an altercation involving Kevin Durant and Tucker during Game 3 in Milwaukee.

Antjuan Lambert, who is listed in the Nets media guide as director of team security, will not work any remaining games of the Eastern Conference semifinal in Milwaukee and will not be assigned to the court area in Brooklyn during the series, the NBA said.

The incident happened with 4:21 left in the third quarter Thursday. Tucker fouled Durant, and the two players began a heated face-to-face conversation. Lambert ran onto the court and forcefully bumped Tucker out of the way. Tucker took immediate objection and began yelling at Lambert. A Bucks security official got between Lambert and Tucker.

Kevin Durant and PJ Tucker got right into each other’s faces. pic.twitter.com/wB4IvtAUxv

Lambert worked in a similar position with Golden State for a season when Durant played for the Warriors, according to his LinkedIn page. Lambert at one time also served as Durant’s personal bodyguard, according to The Athletic.

"I know enough — I guess it sorted out — that it was Nets security, and in the heat of the moment you know that people are coming to try to de-escalate things and try to get things under control and not bump and escalate and have things become a bigger problem than what we’re trying to address, or de-escalate," Bucks coach Mike Budenholzer said. "And in the 24, 48 hours since, if it’s a Nets security guy and he’s bumping our player, it just doesn’t seem like that’s the protocol, and that’s what we would expect from any type of security, whether it be Bucks or Nets or Fiserv or Barclays Center or wherever you might be playing."

The Nets lead the series 2-1. Game 4 is Sunday in Milwaukee.