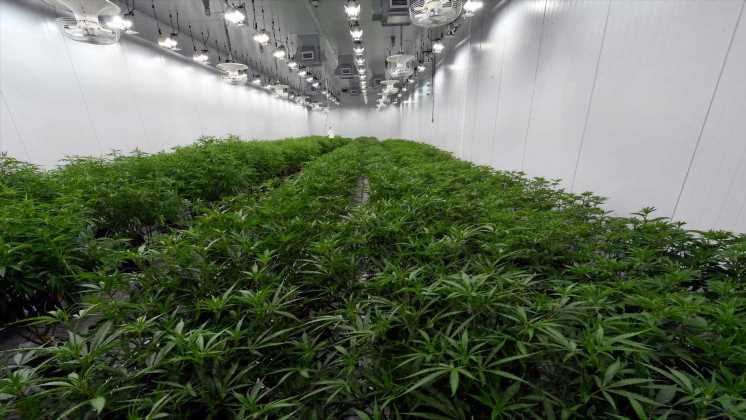 ALBANY, N.Y. — New York has become the 15th state to legalize possession of marijuana for recreational use, allowing anyone over the age of 21 to possess up to three ounces of the drug.

New York Gov. Andrew Cuomo signed the Marijuana Taxation and Regulation Act into law Wednesday afternoon, a day after the state Legislature approved it by a wide margin.

The legislation passed by a margin of 43 to 20 in the Senate and 100 to 49 in the Assembly, with Democrats controlling both chambers.

Effective immediately, it is no longer a crime or violation to possess up to three ounces of marijuana in New York.

But for the next year at least, New York will be in something of a gray area: Dispensary and on-site consumption sales of marijuana cannot begin until April 1, 2022, at the absolute earliest, meaning there will be no legal way to sell the drug to those in New York until then.

The state anticipates legal marijuana sales for those age 21 and older will begin a year from now, as it embarks on the complex task of issuing cannabis business licenses while preparing to enforce a lengthy list of new marijuana statutes.

Once fully operational, the cannabis industry is expected to generate more than $350 million in tax revenues per year for the state of New York, with 40% going to a social equity fund, 40% for schools and 20% for drug treatment and education.

“This is a historic day in New York — one that rights the wrongs of the past by putting an end to harsh prison sentences, embraces an industry that will grow the Empire State’s economy, and prioritizes marginalized communities so those that have suffered the most will be the first to reap the benefits,” Cuomo said in a statement.

New York Sen. Liz Krueger, D-Manhattan, who championed the legislation, touted it as key to removing marijuana from the illicit marketplace run by dangerous drug cartels to one tightly regulated by state authorities.

“The fact is to have a legalized system . . . ensures that the drug is safe from seed to sale,” she said, adding the goal is also to end decades of racially biased enforcement of marijuana prohibition.

“We are wasting generations of lives,” Krueger said, referring to marijuana-related arrests derailing countless lives in communities of color.

Opponents of the legalization plan, however, raised concerns about youths using marijuana, negative health effects from using high-potency cannabis drugs, as well as the lack of details related to plans for enforcing drugged driving laws.

Legislative debate Tuesday over legalizing recreational marijuana touched on everything from the lack of a marijuana breathalyzer to enforce drugged driving laws to rules for prohibiting cannabis edibles that mimic candy.

The legislation calls for creating a new Office of Cannabis Management to implement regulations and oversee the entire industry, including the recreational marijuana, medical marijuana and hemp sides.

Krueger noted the cannabis office will be tasked with finalizing some details for keeping marijuana away from children, such as deciding which types of edibles to ban besides gummies shaped like bears, fish and other animals.

“We will have an agency that will be writing regulations and can address those kinds of questions,” she said.

Meanwhile, state health officials and experts will study how to improve drugged driving enforcement, including the potential use of saliva-based marijuana tests, according to the legislation.

“My family members have gone through drug addiction. Very sad what I’ve been going through, and it started with marijuana,” he said, referring to cannabis as a gateway drug.

Krueger disputed the long-standing gateway theory for marijuana use and compared its risks to other legal substances.

“We tax and regulate tobacco and alcohol. We don’t give people criminal records,” she said, adding that is the reasoning for legalizing marijuana for adults.

New York Sen. Peter Harckham, D-South Salem and other Democratic lawmakers expanded on Krueger’s comments by emphasizing New York is falling behind other states in reducing illicit marijuana use and addressing social injustices.

“We are not about to entice new users. This about taking an existing market that is illegal, making it legal and using the tax revenue for a public good,” Harckham said.

What to know about NY recreational marijuana plans

Pot will be legal for those over the age of 21 to possess, display, purchase, obtain or transport up to three ounces of cannabis and up to 24 grams of concentrated cannabis.

People will be buying marijuana from storefront dispensaries, as well as locations permitted for on-site marijuana use, such as cigar bars, catering halls and outdoor dining areas, with strict rules on where smoking and vaping is allowed. Limited special event permits will also be issued for indoor marijuana use.

Local municipalities will be able to opt-out by banning dispensaries and on-site marijuana use sites.

The law will also allow every New Yorker over the age of 21 to grow up to three mature and three immature cannabis plants at a time, with a maximum of 12 plants per household.

But recreational use growing can’t begin until 18 months after the first legal sales at dispensaries or consumption sites. Certified patients in the state’s medical marijuana program, however, can begin growing six months after the law takes effect.

Penalties for illegal marijuana possession would range from a simple violation on the low end to a Class D felony for possessing more than 10 pounds of flower or four pounds of concentrated product.

Penalties for illegal sale would remain for anyone who sells marijuana or cannabis products without a license.

The legalization vote comes despite opposition from the Parent Teacher Association and various law enforcement organizations.

It was also opposed by the Medical Society of the State of New York, which represents doctors and raised concerns about the need for additional research into legalized marijuana’s negative effects on physical and mental health.

New York’s two prior attempts to legalize recreational marijuana failed amid debates over how to spend tax revenues to benefit communities of color harmed by enforcement of marijuana prohibition.

In 2019, New York approved a law that decriminalized possession of small amounts of marijuana after the bid to legalize recreational marijuana fell apart.

Sabet noted the state is allowing people to possess larger amounts of the drug than many other states and passing legislation without including specifics for addressing regarding road safety and public health.

“Even if you believe in the right of adults to smoke a joint, this is a very bad bill,” he said in a statement.

‘Rush to judgment’? Costly Suez Canal calamity fuels support for Indian crew of Ever Given

Kansas at Iowa State odds: Can Jayhawks hang with Cyclones?