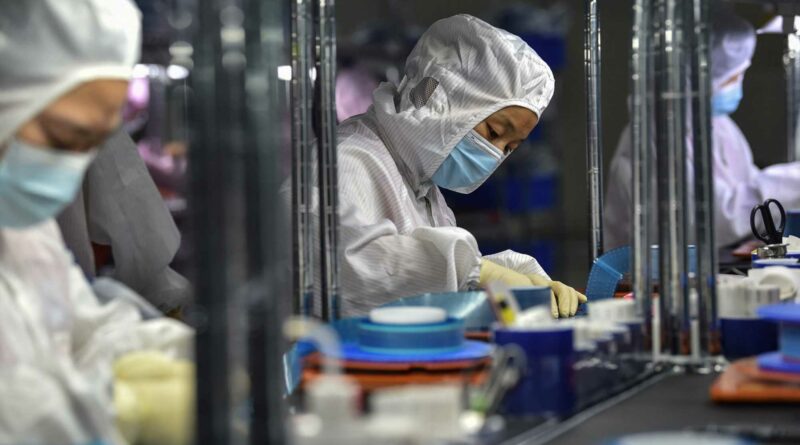 "Markets now are so perplexed by the fallout of the property sector that they may ignore Beijing's unprecedented curbs on energy consumption and energy intensity," Lu said in a note Friday.

As a result, he expects China's GDP to grow by 7.7% this year, down from 8.2% previously forecast.

Chinese President Xi Jinping announced in September 2020 that China would reach peak carbon emissions by 2030 and become carbon neutral by 2060. That's kicked off national and local plans to reduce production of coal and other carbon-heavy processes.

Meanwhile, worries about indebted Chinese property giant Evergrande's ability to stay afloat has roiled global markets in the last week. The real estate market, along with related industries such as construction, accounts for more than a quarter of China's GDP, according to Moody's estimates published in a late July report.

Fitch on Thursday lowered its China growth forecast to 8.1% from 8.4% on expectations a slowdown in the property market puts pressure on domestic demand.

Other economists haven't cut their 2021 China GDP forecasts yet, but are watching a rising number of drags on growth.

The central government in March set a much lower GDP target of over 6% expansion for the year. Analysts have noted policymakers are far more interested in the quality of economic growth than its pace.

"We believe it is unrealistic to expect China to maintain high and stable growth as Beijing delivers substantial shocks to both supply and demand sides," Nomura's Lu said in his report Friday.

On the supply side, he pointed to a "game changer" in mid-August when the national economic planning agency announced that 20 regions — accounting for about 70% of China's GDP — failed to meet carbon-related targets, prompting local authorities to quickly take action.

"Regarding demand shocks," Lu said, "China's recent, sweeping regulatory crackdown on internet platforms, fintech, video games, off-campus tutoring, ride-hailing, data privacy, food delivery, crypto miners and e-cigarettes have been significant. The crackdown on off-campus tutoring may be especially negative for growth in Q3 and Q4 this year, as the entire sector has been decimated"

He lowered quarterly GDP forecasts to 4.7% year-on-year growth in the third quarter and 3% in the fourth.

China's official release on third-quarter GDP is due out Oct. 18. The accuracy of government data is frequently doubted.

Spillover from Evergrande and real estate

Chinese authorities' efforts to reduce high reliance on debt in the massive real estate sector in the last year have sent shares of indebted developer China Evergrande tumbling. The company has remained silent on an $83 million interest payment on its U.S. dollar-denominated debt that was due Thursday. The firm has a 30-day grace period.

Ahya added the slowdown could result in a decline in private consumption and a drop in property investment that subsequently lowers fixed asset investment in related manufacturing sectors. "These spillover effects are creating downward pressure on growth at the same time that production cuts to meet energy intensity targets are weighing on growth," Ahya said. "The regulatory reset is weighing on corporate sentiment and consumption is softening because of intermittent Covid-related restrictions."

If the constraints on energy-intensive production remain, the Morgan Stanley analysts expect fourth-quarter GDP growth will be dragged down by about 1 percentage point. The investment bank currently forecasts 4.5% GDP growth in the third quarter from a year ago, and a slower 4% pace in the fourth quarter.

China’s ‘common prosperity’ push could put Tesla and these other stocks at risk, BofA says

"The government has not loosened policies because the economic pressure is not high enough," Zhiwei Zhang, chief economist at Pinpoint Asset Management, said in a note Sunday. "In particular, the unemployment rate has been relatively stable, and export growth has also been strong. The government may think they can afford to wait till the year end to loosen policies."

He noted that the overseas market is not nearly as worried about a hard landing in China's economy compared with previous declines in the MSCI China Index.

The drop in stocks this year has not affected the yuan exchange rate, Zhang said. "There [is] no sign of capital outflow, and the gap between the offshore [yuan] exchange rate and the onshore exchange rate did not widen. This shows that the current Evergrande incident has not caused panic on China's macro economy in the international market."

The MSCI China Index has fallen more than 18% so far this year. It tracks shares of Chinese companies traded in the mainland, Hong Kong and the U.S.

Me & My Property: Look west for better rental yields

See the moment CNN called the race for Joe Biden