Peloton removed a viral ad starring Chris Noth from its social media accounts after sexual assault allegations against the "Sex and the City" actor surfaced Thursday.

"Every single sexual assault accusation must be taken seriously," Peloton said in a statement. "We were unaware of these allegations when we featured Chris Noth in our response to HBO's reboot. As we seek to learn more, we have stopped promoting this video and archived related social posts."

The allegations of sexual misconduct appeared in a Hollywood Reporter article Thursday. Two women who approached the publication separately, months apart, and who do not know each other told the Hollywood Reporter that the promotions and press reports for the new "Sex and the City" sequel brought back painful memories of the incidents. One purportedly occurred in Los Angeles in 2004 and the other is said to have taken place in New York in 2015.

Noth denied claims that he assaulted two women, saying the "encounters were consensual."

"It's difficult not to question the timing of these stories coming out," he said in a statement. "I don't know for certain why they are surfacing now, but I do know this: I did not assault these women."

The premiere episode of the HBO Max series "And Just Like That," brought Noth's beloved character, Mr. Big, back into the spotlight. Big was depicted in the "Sex and the City" spinoff dying of a heart attack after taking a 45-minute Peloton class.

After the episode aired, Peloton's stock tumbled, prompting the cycle maker to issue a statement that its fitness equipment can improve people's physical health. The brand eventually partnered with actor Ryan Reynolds' marketing firm Maximum Effort to produce a parody ad. In the spot, Noth, as Mr. Big, wakes up and tells Peloton instructor Jess King: "I feel great. Shall we take another ride? Life is too short not to."

Peloton had said it created the spot in just 48 hours in a studio in New York City after the reaction to the show. The release of the ad was initally positive, and shares of Peloton stock rebounded. On Thursday, Peloton shares were trading up nearly 4%. After several volatile sessions over recent days, the company's stock remains down nearly 74% year to date, putting its market value at $13.05 billion.

Peloton has declined to comment on how much it spent to retain Noth and Reynolds to help on the ad'sproduction. On Thursday, however, Reynolds also removed the advertisement from his social media.

"The accusations against me made by individuals I met years, even decades, ago are categorically false," Noth said in his statement. "These stories could've been from 30 years ago or 30 days ago — no always means no — that is a line I did not cross." 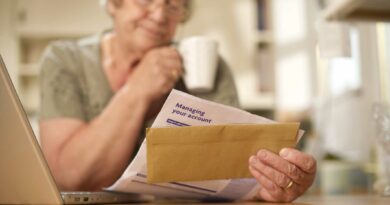 Women are still behind men when it comes to retirement savings. What they can do to build security